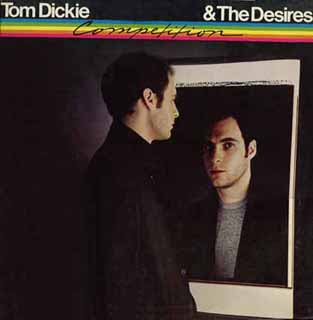 The following article about Boston rockers Tom Dickie and the Desires was originally published in FFanzeen magazine, issue #6, in 1980. It was written by Nancy Foster (aka Nancy Neon).

Tom Dickie and the Desires released two albums in their short history: Competition (1981) and Eleventh Hour (1982), both on Mercury (though Jon Macey has hinted that there is enough recorded material to release another). After their separation, Tom Dickie moved to California and is not in music with any major presence, except for the occasional recording. Jon Macey has had much better luck with the seminal Fox Pass (still existing) and Macey’s Parade. 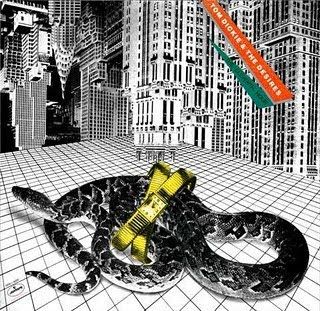 I was lucky enough to receive Dickie’s demo tape a few months ago. Tom and his combo have recently “pacted” with Phonogram-Mercury and are managed by Tommy Mottola. But never mind that, rock’n’roll is the main issue here.

When I first heard the balladic “Maybe Next Time,” I was impressed with Dickie’s ability to sing at once smoothly and melodically, and still be aggressive and intense – like a romantic Elvis Costello. In fact, the group’s ability to rock-out without sacrificing melody sets them apart from much of the competition.

All songs are co-written by Tom Dickie and Jon Macey (bass). The emotionalism of the lyrics is enhanced by Dickie’s knowledge of phrasing. The music is full of subtleties and creates a wistful tone in “Maybe Next Time.” That one, along with “Twisted Years,” “Change Your Mind,” “Count on You,” “So Sad,” and “I’m the One,” are my personal favorites on the demo tape.

“5x5,” though, instrumentally paints an ominous tableau. Tom Dickie and the Desires often open shows with this ballsy wave to the Stones. However, with a songwriting team as articulate as Dickie / Macey, and a singer as superb as Dickie, to have no lyrics / vocals seem like a waste of microfilm!

“Twisted Years” has that raw, basic Stones bar band feel with psychoanalytic lyrics. The musical dynamics as the verse builds to the chorus are exhilarating. Michael Roy’s guitar work is colorful and tastefully executed. The harmonies are fine and embellish the song as well.

Though “Add Up the Ad Girls” is sarcastic – a piss-take on vacuous fashion models – Dickie’s voice still sounds too polished and sophisticated to convincingly play the male whose mind is boggled by the media whirlpool of pretty, precise images. Hearing the tape alone, one would think it inappropriate for a man of street nobility like Dickie. Yet, live it is a rave-up. Similarly, though, “On the Other Side” seems heavy-handed and a bit plodding on the tape. Live, it kicks with that signature Tom and the Desires’ emphatic punch. Vocally, “On the Other Side” is a virtuoso performance.

“Change Your Mind” is a hit for sure, highlighting sensuous singing, sensitive lyrics, and an obsessive melody. “Burning Up” features the most artistic and probing lyrics. It is reminiscent of a young McCartney in one of those rare moments when he was aggressive and rocked.

“Count On You” and “So Sad” sound especially fabulous back-to-back, like a double A-side! Both are romantic songs with unhappy endings. Still, the melodies and riffs are catchy. These two, along with “Change Your Mind,” would be my picks for singles.

On “Count On You,” Dickie’s vocal pacing and phrasing are perfect. Phrasing is even used with expertise in the graceful musical breaks. Dickie’s voice is wracked with emotion at the end of the song.

“So Sad” is more intense and analytical than “Count On You.” The bridge is beautiful. Once again, Roy’s lead guitar work is elegant and poetic. “Don’t Wait Forever” has cabaret overtones and is philosophic.

During a visit to NYC, Dickie invited me to one of the group’s rehearsals. The Dickie / Macey team was making impressive progress. The new songs are even better than the ones I enjoyed on the demo.

The newer tunes include the authoritative, commanding, even majestic “You’ve Lost,” the smooth, sensuous “She’s a Desire,” and a frocking, bouncy “Downtown Talk.”

“Waiting Waiting” is a disconcerting, explosive rocker on which Macey sings lead currently:

Macey’s demeanor convinces you that he is truly tormented by specters from this past. The piece de resistance live was “This Song’s About You,” which Dickie belted out with immense passion. It may have been just a rehearsal, but he was giving 500%. Of the new songs, my picks for a (thematic) single would be “You’re Lying to Yourself” and “All Those Lies.” Both have the “melodic and punch” trademark.

Tom Dickie and the Desires should be playing out again soon. They are currently breaking in a new drummer and a keyboard player, both of who are enthusiastic and do justice to the supreme songwriting of Dickie and Macey. See them and have your faith in music restored!