This article was originally published in FFanzeen, issue #3, dated Fall-Winter 1978-1979. It was written by Barry Geiger.

As I’ve stated before, I’ve had the opportunity to see the Runaways play New York three times: once in its original incarnation at a (mostly) music industry showcase at CBGB, once opening for the Ramones at the Palladium, and then post-Cherie Currie with the B-Girls opening, again at CBGBs. Each show was different, and all were a fun night.

When reading this article, I think it’s important to remember the time period in which it was written, because you’re probably going to cringe a bit at the language (i.e., the female descriptors early in the piece). Still, this is one of the early articles about the band, so I leave it as it stand.

I don’t exactly agree with all of what Barry says, since I find the second album to be pretty damn good (though none can hold a candle to the first), but music is so subjective that I respect what he felt.

The only member of the band I met post-Runaways was Currie, at a Chiller Theatre convention in the early 1990s, and she was an asshole to me. Considering how Right Wing she is now, somehow that makes sense. But that’s not going to stop me from enjoying the music of which she was an important part. – RBF, 2018

During the Summer of 1976, I went to the newsstand to buy the new issue of Creem. When I got home, I read this great review of a new debut album about this group of five foxy teenage girls who call themselves the Runaways. After finishing the article, I said to myself, “This band will never make it. The record company must have paid off the magazine to write something good about these chicks.”

Even though I thought it was all a bunch of bullshit, I was a little curious to hear them. I didn’t want to be closed-minded about them. That night I went to the record store and saw the (self-titled) album on sale for three-and-a-half bucks. It had a nice cover, so I figure, “What the hell.” I bought the record.

When I got home and played the album, I was astounded. These girls were really good! It was like magic. From the first note, I knew that this band was very special.

This group was really talented. Cherie Currie’s singing was pretty good, Lita Ford’s guitar playing was great, Jackie Fox’s bass playing was fantastic, and Sandy West’s drumming was sheer dynamite! Joan Jett seemed like a mediocre guitarist, but her lyrics were outrageous: “I’ll give you something to live for/Have you, grab you till you’re sore.”

“Cheery Bomb” was destined to become a teenage anthem. “American Nights” was sheer poetry, “Blackmail” was two minutes and forty-two seconds of pure ass-kicking rock and roll, and their rendition of Lou Reed’s “Rock and Roll” was a true delight. “Dead End Justice” would have been great if it weren’t for that stupid dialogue between Cherie and Joan in the middle of the song. 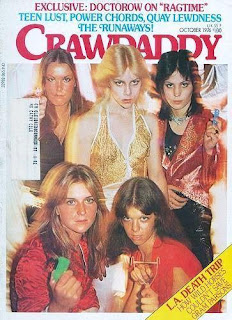 For weeks and weeks, I couldn’t get that record off of my turntable. I simply loved it. Then it happened: the Runaways were featured on the cover of Crawdaddy Magazine. I said to myself, “This is it. They are gonna hit it big!”

Well, I was wrong. Their second album, aptly titled Queens of Noise, which was released in early 1977, was a tremendous disappointment. Alright, “I Love Playing with Fire” is a masterpiece, “Born to be Bad” is pretty good, “Neon Angels on the Road to Ruin” is decent, and the title cut is bearable, but the rest of the album is totally uninspiring. I quickly began losing interest in the band. Cheri started to sound too much like Suzi Quatro. The lyrics weren’t as powerful as the ones on the first album; and neither was the music.

They started sounding too commercialized. Steve Tyler of Aerosmith co-wrote one of the songs. Why the hell was he writing for punk bands? I couldn’t believe that the Runaways had sold out. Their songs were bordering with Middle-of-the-Road. “Heartbeat” and “Midnight Music” could have been big AM hits with the right promotion, but they were not rock and roll.

One day that Summer I heard the news: Cherie Currie split from the band. The reason was personal conflicts with Joan Jett. I was shocked. It was impossible for me to imagine the Runaways making it without their lead singer. 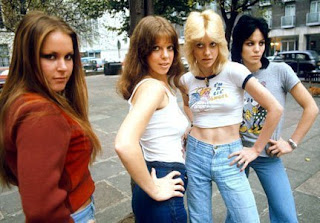 A few weeks later it was announced that Jackie Fox, the bass playing Jewish Princess, had quit the Runaways so that she can study Law. I was sure that this meant the end of the group. Jackie was probably the most talented girl in the group. Her basslines are what made me so intrigued with the first LP. I was really upset when I heard they lost her.

Rumors were that Danielle Fay, bassist of the Zippers, an LA band, would replace Jackie, and Joan would take over as lead vocalist. I started gaining interest in the band again. I had heard the Zippers before and I knew that Fay wasn’t bad. I also knew that Joan was just as good a singer as Cherie (she did sing “I Love Playing with Fire,” the best tune on the second album).

The Danielle Fay rumors were later found to be false. As a replacement for Jackie, the Runaways hired a blonde bombshell by the name of Vicki Blue.

In November, the third album, Waiting for the Night, was released. I found it to be the best thing the band had ever recorded. Vicki wasn’t nearly as adept a musician as Jackie was, but she was adequate. Sandy was terrific, as usual. Joan was a very pleasant surprise. Her voice sounded just perfect: the lyrics were full of emotion. It was great!

The most interesting thing about this album, however, is Lita Ford’s devastating guitar riffs. She had evolved from a good guitarist playing for a good group into the driving force behind a great rock and roll band. 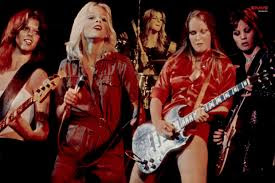 Joan had also developed into a fine rhythm guitarist. On the first two albums, her guitar playing wasn’t nearly as important as it was now. On The Runaways album, her major contribution to the group was her songwriting. On the second album she not only wrote the songs, she also sang half of them. On Waiting for the Night, she not only writes and sings the songs, her guitar playing is now an integral part of the sound. She is now the true “leader” of this band.

This album contains some of the hardest driving rock and roll songs the Runaways have ever recorded. “School Days” was custom-made for high school kids and people who know what it’s like to be a teenager in the ‘70s. “You’re Too Possessive” is so full of hate and vengeance that one can’t help but love it. “Thrash Can Murders” is a fantastic song, thanks to Lita’s extraordinary guitar solos. “Wasted” is a New Wave classic (because of its lyrics, not the music).”Don’t Go Away” is the best song on the album. Joan and Lita work great together, exchanging riffs throughout the song. Sandy’s drumming is as superb as ever. It’s also the only number on the album in which Vicki matches Jackie’s excellence on bass.

If the Runaways can continue producing albums like Wafting in the Night and keep away from the kind of dissention that made Queens of Noise such a disaster, they will become a truly super group.