This article was originally printed in FFanzeen, issue #7, dated 1981. It was written by our Managing Editor and current philanthropic goddess, Julia Masi.

I had the chance to see the Colors a few times, mostly at CBGBs, back around the time this article originally came out. Solid hard-edged powerpop sailing among a sea of punk, the Colors never really went anywhere, though on a verge a few times, releasing a couple of records and lasting for about four years. Some of its members did pretty well afterwards, though. For example, Charlie Pipp went on to join the David Johansen Group (pre-Buster Poindexter); Robert Vickers joined the much popular The Go-Betweens, and then Jersey’s own Yo La Tengo, and he now owns his own Public Relations firm called Proxy Media since 2005; Tommy (Tomas) Cookman is the founder/CEO of Cookman International and Nacional Records,which has released over 150 albums and earned at least nine Grammy or Latin Grammy awards from its over 72 nominations, and he is considered an ambassador of Latin alternative music. But while they were together, they were managed for a time by Hilly Kristal. – RBF, 2018

A shot of adrenalin in the fatigued veins of the New York music scene, the Colors explode on stage with a rush of hardcore rock’n’roll that recaptures the spirit of the ‘60s British Invasion. But these guys aren’t stuck in a time warp. Their debut EP, The Colors, produced by Clem Burke [of Blondie – RBF, 2018] for Infinite Records, proves that they have commercial viability for the ‘80s.

Tommy Cookman (vocals), Paul Sass (lead guitar), Elf (drums), Charlie Pip (rhythm guitar), and Robert Vickers (bass) have the G-rated sexy looks that teenage idols are made of. And enough confidence in their talent to know how to use that as an asset.

“People underestimate us from the word go,” says Charlie. “They think we’re a little kid band. We’re really well rehearsed. As soon as we hit the stage, we hit them with this wall of really tight music. It shocks them.”

They may look like a bunch of rowdy kids hamming it up every chance they get, but there is nothing childish in their demeanor. Dressed in the vibrant colors and military style of the Mersey Beat era, they’re as much fun to watch as they are to listen to.

Tommy, who has an affected English accent, jumps around and off the stage to spur audience participation; offstage, he’s surprisingly low-keyed for a  lead singer, with a voice so soft you have to hug him to hear him. He doesn’t care that some people are initially attracted to the band because of their looks. “It’s like Cheap Trick. When they played the Palladium, the front was all twelve-year-old girls. And then there are all these twenty-five-year-old guys from Brooklyn pushing to get to the front because they like the music. The girls like Cheap Trick because of the way Robin (Zander) looks. People make these comparisons because they see a young band instead of what they do on stage.” 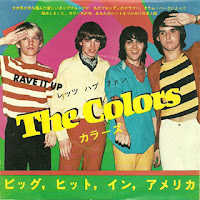 “We’re very audacious on stage,” mentions Paul. “We have a career in music cut out for ourselves. It just takes a lot more time than we may have in the past. We’re very serious. We may not be in a very serious business, but we’re very serious about it. And one of the most important things about it is money. It costs money to play. It costs a lot of money to sound good. We rehearse; that’s one of the best things about having a manager. We rehearse in a studio. But a lot of artistic and musical ideas and concepts we want to put across, we just can’t. We’re not conceptual masters. We don’t have studio production on the first record. The engineer, Jay Burnett, is a genius. But to do more than that, it takes not even our earning money, because bands don’t earn money anymore. They get signed to a four-year contract and the record company that sings them figures, ‘Well, they won’t make any money during the first contract, but when we re-sign them and they make it, they’ll pay us back all that money.’ And that happened with one out of a hundred bands. And the other ninety-nine go back to being dishwashers.”

“Now-a-days, you have to build a lot more than you did before,” explains Robert, in his light Australian accent. “You think of a band like The Who, or a lot of bands from the ‘50s or the ‘60s, they didn’t have to build up anything. They just had to arrive, and once they’re there, you can’t get rid of them. Once you have an establishment, you can never disappear. The public will keep buying the records no matter what you do.”

The Colors know how to package them-selves so that people will buy their record, which comes in seven different shades of colored vinyl. The disc is wrapped in a sleeve which spouts a full-color picture of the boys, and has its titles in both English and Japanese.

Tommy, the resident “Jap-o-phile,” takes an active interest in the financial side of the band. He knows how important it is to capture the Japanese market, and he’s aware that the largest record consumers in Japan are teenage girls. “The whole Japanese thing is nice. You see singles that come out in America and especially on the New York scene, they all sort of have the same thing. The Japanese thing just sort of gives it a real distinctive sort of feel when you pick it up. It looks like an import.”

Another unusual feature about The Colors’ EP is that one side is in 45 and the other 33-1/3. Tommy states that, “Peter Crowley was telling me that at Max’s (Kansas City), they have it in the juke box with just one side playing two songs listed, and the other has a sign that reads, ‘Please do not play this side.’ About five times a night someone plays it.” The EP, which has Robert’s “Have You Seen Her” and “West End, “ Paul’s “Rave It Up,” “Growing Up American” and “Jealousy,” proves that the band’s sound cannot be diluted. Paul comments, “The single is a mini-production. It’s almost like a mini-album. Sometimes it seems that our entire set is one song with a lot of parts and a lot of breaks. That’s our business now. We talk about going in and slaying the audience. If they’re not screaming by the end of the set, then it’s a waste of time. If they’re not climbing on the stage, they’re dumb.

“Our instrumentation has a greater range. Not more than other bands, but some bands like to use the same style of playing over and over. Maybe it’s because they think it’s their style. We try to do as many different types of songs as we can. They’re all rock’n’roll-fast. 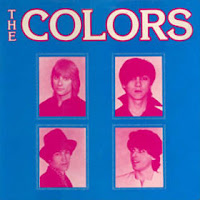 “Working with Clem has been a really good experience because he’s taken seriously in the industry.” They’re not worried that their association with Clem will have an adverse effect and draw biased criticism to the band. “We already went through that,” Paul notes. “Last Summer, we did about ten gigs with Clem and some of them were billed as ‘The Colors, featuring Clem Burke.’ And if you know the way Clem plays drums, then you know that we couldn’t appear on stage with him and not either get blown away or be really good. I’m sure people didn’t come up to Clem and say, ‘Sure you’re a great drummer, but the band you were with was terrible.’ I think he was a really good drummer for our band. We were right up there with him.”

Last September, Elf joined the band. He received his nickname in Junior High school, where he was always the shortest of his friends. And he likes it because, “When The Colors make it big, then your family doesn’t get a lot of mail, and nobody knows where you live.” On stage, the blond, doe-eyed drummer is almost obscured by his drum kit. “Want to know what kind of equipment I got? My drums were bought by Sears. Right out of the catalog. Sears brand.”

According to Charlie, their rehearsals aren’t much different from their performances. “I always believe that the audience is there for our entertainment only. I think of the audience as being behind the glass. It’s their privilege to watch us doing what we think is cool. We don’t need the audience to make the gig. We sound just as good with nobody there. It’s a treat for them. They’re paying to see us do our professional thing, like you’d pay to see a trapeze artist do a triple somersault. When he’s up there, he doesn’t say, ‘This one is for the crowd.’ He says ‘I’ll do a flip and go downstairs and have a cup of coffee. See you later.’ The audience is just there for him. I can’t say I don’t care about them, because they’re the consumer and the ultimate goal of what I’m trying to do. But I’m not writing songs to make money and to make those people like me. I’m saying, ‘Here, look, this is my statement in musical form. Let’s dance and have a good time’.”

“Being good on the guitar doesn’t mean being like Eric Clapton or something. It’s being able to quickly transmute your ideas and feelings at that moment into musical terms. Just picking up your guitar and saying, ‘I feel sad today,’ and playing all these sad chords. It’s just another way to speak. A lot of people in New York don’t get nothing out of them. They just get noise. But even the volume and the noise are expression. To me, the epitome of rock’n’roll is getting commercial airplay. Most of the bands can’t ‘cause they’re so experimental.”

“The real musicians,” Elf says, “are those Black cats who play in jazz clubs for $18 a night. They’ll play all night long.” He speculates that rock music is “going back to where it came from. Nothing new, but different. We’ve already had classical and psychedelic. And we’ve only had rock’n’roll for 27 years. Nobody has really done anything with it since Chuck Berry. It’s been refined. People can play more guitar notes and runs faster and faster, but then it got more intense, like Cream and Jimi Hendrix. And it got more intricate with lyrics, like ELP and Yes. That isn’t rock’n’roll. It doesn’t have that beat, like Chuck Berry says, on the 2 and the 4.” Elf thinks rock’n’roll will be around “as long as you have people who want to dance to the 2 and the 4, and people who want to get drunk and play.

“I’m in rock’n’roll ‘cause I got a scrap book I can put my pictures in. I gotta have something to show my kids.”