The War on "Happy Holidays"

Text © Robert Barry Francos, 2012
Images from the Internet, which can be made larger by clicking on them 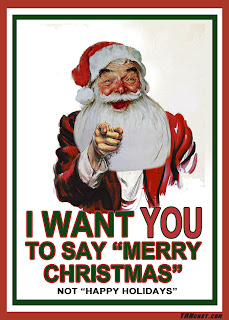 As with many places in the Western Hemisphere, here in Saskatoon there is currently a debate on flashing bus signs, which alternate every couple of seconds between the destination and “Merry Christmas.” Someone is currently bringing the City to the Human Rights Commission, stating that this is discriminatory, and exclusive. He is being lambasted in much of the media and has even had threats to his life. Some are saying he is part of the War on Christmas.

This, of course, is ludicrous. There is no war on Christmas. No one is trying to stop Christmas, but rather also include their own beliefs and holidays into the equation. But the cultural hegemony, as it has been for over a thousand years, is that “my belief is more important than your belief.” Recently, my city counsellor (equivalent to an assemblyperson) stated to me, “Merry Christmas is no longer exclusive to Christianity. The Christmas Season and the greeting ‘Merry Christmas’ have come to mean different things to different people. The celebration/season is as diverse as the cultural composition of our community.” His response to the debate was to say, in a public sphere, “Merry Christmas Everybody.” 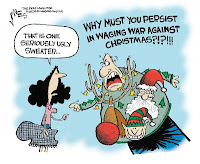 Really? Christmas is no longer exclusive to Jesus? Well, let’s look at the word. Christmas = Christ + Mas, or celebration. A celebration of Christ. I found his remark highly insulting. Just what did he mean by everybody? It certainly does not include me, or at least three others I know of his constituency (one Jewish, one semi-Buddhist, one atheist). When I questioned him about this (on Facebook), part of his response was “The Christmas Season and the greeting ‘Merry Christmas’ have come to mean different things to different people. The celebration/season is as diverse as the cultural composition of our community.” Yes, he is correct, to the Christians it means “woo-hoo” but for most of us who are not of the belief, it can also mean oppression. However, for the way he meant it, Bzzzzzz wrong. Just because Christianity is the majority does not make it right. 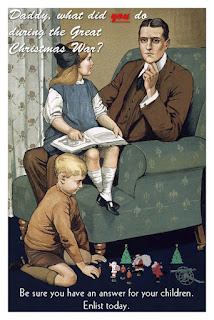 The year-end season is filled with holidays of a legion of faiths. Those who are not Christian (i.e., not "of Christ"), be it Jewish (Hanukah), Muslim (Ramadan, Eid al-Fitr, Malkh), African/African-American/-Canadian (Kwanzaa), Buddhist (Diwali), Sikh (Gurpurab) Hindi (Diwali, Festival of Lights, Holi, Festival of Colors, and Janmaashtmi), Wiccan or other goddess-based faiths (Yule, solstice), followers of Zarathustra (Zoroastria) and others (and I'm not even going into the beliefs of agnostics or atheists), Christmas can be an assault rather than a pleasure. It is telling us (and yes, I'm aware I am speaking for others) that we are not part of the Saskatoon culture, or wherever else this situation is occurring.

Currently, I work for an organization that helps new arrivals look for jobs and prepare for their new life. Most of those I meet are either non-Christian Asian, or Muslim. With the new flood of immigrants coming to the West, the conservative officials currently in office are feeling the pressure of some older constituents who fear the change, or the narrow minds of the “me-or-them” younger voters, and use their own beliefs to shore up the current condition. But that status quo is shifting, and changing fast. Alienating the new arrivals (something conservatives seem to thrive on, using that fear of change) was done to the Irish in the 1880, the Jews in the early 20th Century, the Italians after that, and so on. Now it’s anyone who does not fit into the paradigm set up by the majority in charge. 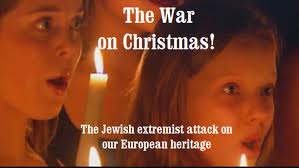 I’ve heard it said, “Canada [or the United States] is based on Christianity” or “the teachings of Jesus Christ.” Uh, no, it’s not. For example, let’s look at the last 500 years or so: Jews have been around since the beginning of the New World, and essentially made up most of Columbus’ crew (who were taken from the prisons, during the Spanish Inquisition). Most of the American Revolution was funded by Jews in New York and Boston. Much of the infrastructure of the west was built by non-Christian Chinese laborers. Multi-cultures built North America. But if you want to look back, it was First Nations, Inuit, Aztecs and Mayans (among other indigenous groups) that were here way before any Christian settlers found their way to the New World, each with their own beliefs that were just as valid to them as those who settled on their land. 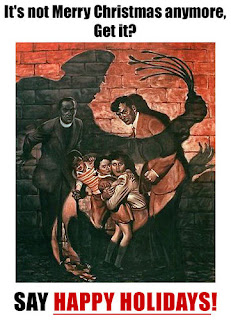 I have no problem with a citizen wishing me a "Merry Christmas.” It’s a nice sentiment, no doubt. However, when it is stated by a elected government representative in an official capacity, or is on government or common land, I cringe at it. It no longer feels like a government representing me when the insistence is on something that does not include me. I become the "other," which is the first step toward persecution. Underrated comic Bobcat Goldthwait once became upset with an audience member who gave him the Arsenio Hall “woop-woop,” stating it is only one short step between “woop-woop” and “sieg heil.” While this may be a stretch, I understand what he meant, and to me in is echoed in the “Merry Christmas” chant by a governing body.

The solution to this is a simple Happy Holidays or Season's Greetings. Keep Christmas in your heart. Just don't use it as a stake into mine, and others that are not of Christian belief. Saying Happy Holidays is not a War on Christmas, it is a cry asking for equality, for inclusion into the cultural milieu. Besides, it’s not like there aren’t many other reminders of Christmas. For example, people have nativity scenes and both beautiful and occasionally garish lights (and many ugly large blow-up thingies) on their property, stores are filled with Christmas music and signs, the light poles lining the street are filled with Christmas icons (Santa, angels, and the like), and the Salvation Army’s presence is overwhelming. Having a State-stated “Happy Holiday” is not going to change people’s beliefs, nor make a dent in the nearly omnipresence of Christmas ambiance. Season’s Greetings is more of a way of saying “Welcome one and all.” I will remember this intolerance come election time, and I am going to assume so will many of the new large numbers of immigrates.

Merry Christmas is just part of the majority’s colonialism at the forefront. “You Shall Have No Other Gods Before Me” is taken from a non-Christian book, the Old Testament, and yet has been coopted to proselytize and dominate others. So, how is changing the signs on city property to Happy Holidays from Merry Christmas a War on Christmas, when it is all-pervading nearly everywhere else?

Images from the Internet 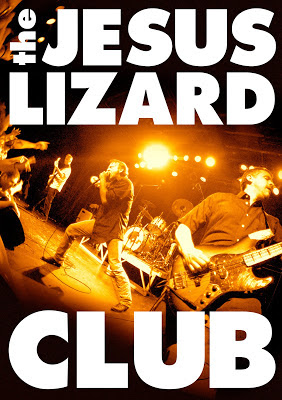 
Let’s get the technical stuff outta the way first: this show was taped on the first stop of the Jesus Lizard’s reunion tour on Bastille Day, 2009, at the large and packed Exit/In Club, in Nashville, TN. The circuit was the first time the band had played together in a decade.  Now, let’s tawk.


If they had formed ten years earlier than 1987, they may have been labeled as No Wave, but because they got to share a split 7” with Nirvana, and recorded with Steve Albini in Chicago, they were more known as “Alternative.” Their sound is full of dissonant notes, repetition, and singer David Yow’s yowling (please tell me I’m not the first one to do that combination of words). After their song was included in the film cult film Clerks (1994), they signed briefly with Capitol Records.


The Jesus Lizard was known for being bellicose in the post-punk days, when bands were becoming more sedate after the rush of hardcore aggression. While they would never reach the levels of, say, GG Allin for assaulting their audience, they were still the real deal. One might compare them in intensity to, oh, possibly down-under’s Rose Tattoo, though their sounds are incredibly different.


The audience for this show is definitely up on JL, as they applaud as soon as the first notes of the song are played. Always good for when recording a show for posterity. For me, I never had the opportunity to see them live, so this gives a front row center view. Strangely, I don’t see much slamming, even with Yow’s occasional stagediving and crowd surfing (with his being chubby, sweaty and shirtless, I wouldn’t want to be the one hoisting him).  Bouncers keep the stage clear for anyone joining in on the diving.


Watching the band hammer away, it is clear to see that they know their chops, with the sounds coming out actually being quite complex, just being overlaid together to clashing and crashing.  As for the vocals, well Yow is musically rambunctious, occasionally reminding me of outsider singer the Legendary Stardust Cowboy. Don’t expect to make out too many of the lyrics. Or hardly any. And perhaps I shouldn’t mention his passing resemblance to Peter Tork…


The sound is quite crisp, and probably giving a better picture of the band’s true flavor. In fact, probably better than the Albini sessions where Yow was barely heard over the din. This puts him where he belongs, front and center.


If you were a fan of the band in their heyday, this will certainly not disappoint, and in fact, bring some relatively clarity to what you were imagining in your head about the group.