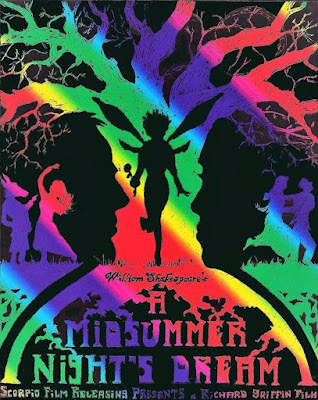 If you are yet unfamiliar with Rhode Island indie director Richard Griffin, well, you have some homework ahead of you. A critic’s darling and a fan’s friend, he has dipped his director’s stylus into various genres, mostly stuff that Hitchcock might approve (e.g., 2013’s Normal or 2011’s Exhumed). Sure many of his titles can fall into the horror genre (or meta-horror subgenre), but by crossing the streams of the likes of Hammer, Italian giallo, revenge, Christian scare films and even a redneck creature feature, but he has declared he is a director that is not tied to any single idea or style. Griffin got his start with Shakespeare with Titus Andronicus back in 2000, so this play seems like a good place to bring it back home.

Of all Shakespeare’s plays, this one is the goofiest. That’s saying a lot, actually, considering he has cross-dressers, mix-ups and general mayhem in his comedies. Just look at some of the names of characters here: Peaseblossom, Snout, Nick Bottom, Francis Flute, Mustardseed (you just know that has Biblical reference), and of course, Puck.

There have also been many, many adaptations of the story over the years, including one with a young Mickey Rooney as a manic and bare-chested Puck. As with nearly all Shakespeare’s works, the language is poetic from another era, so yes, it’s hard to keep it sounding conversational, but like the more serious Hamlet (whose presence is also felt here) this story of a play within the play is told nearly as a whim, a story to tell before going to bed, a dream on a midsummer night (didja see what I did there?).

But this is Richard Griffin, whose films are gloriously known for their style of gender-bending, and sexual orientation being a mere thing to be trifled with within the story. And over the years, Griffin has proven that he is fearless in this way. Also, as many have before him, he has taken the story out of the original play’s time period of Ancient Greece, and placed it in 1754, in the fictional town of Athens, in the British Colony of Massachusetts.

The text is abridged a bit, but loyal. That stated, I will make some commentary about the text as well as the film as we go along our merry way. For example, the elder Egeus (Bruce Church) is angered that his daughter, Hermina (Ashley Harmon) has fallen in love with someone that he has not chosen. Rather than singing “Tradition,” like Tevye, and bending with the times, instead he asks the ruler, Theseus (the noble Steve O’Broin) for permission to either kill or disfigure her if she disobeys. Yikes. Did you know Shakespeare dealt in Honor Killings?

Griffin also subtly plays up the lines that meant one thing when it was written, and then uses modern terminology to imply other things. For example, the King of the Fairies (get it), Oberon, is supposedly in love with Hippolyta (Lee Rush), the person about to marry Theseus, but he is surrounded by pretty boys, as his bride, the highly corseted Titania (Anna Rizzo), states that he has been, “Playing on pipes of corn and versing love / To amorous Philida.” And when vexed-yet-comic Helena (Elizabeth Loranth) is distraught with Hermina, thinking she’s being Gaslighted, remind her of years before when they “…Have with our needles created both one flower, / Both on one sampler, sitting on one cushion, / Both warbling of one song, both in one key.”

This is definitely one of the more often filmed comedies of Shakespeare (at least four in 2016 alone), and it’s arguably the most filled with sexual tension, naughty bits, and innuendos (for example, a guy named Bottom who is an ass, turns into, well, an ass; great donkey head created by Jason Harrison, by the way). But Griffin being Griffin, he takes something that’s been done before, and manages to add some new sparkle to the whole thing. A lot of this is the cross-gender moments, some of which I mentioned above.

But mostly it’s a lighthearted play, despite the anger, the wrestling, the threats of physical harm to women, and sexual animosity between some of the key characters that appear sporadically. This is also reflected in this production via an obvious-stage setting for much of it, the primary-colored lighting supplied by Jill Poisson, and the hand-held cameras, which is thankfully never exploited to the point of seasickness for the viewer. This whimsicality (well, hell, there are fairies in these woods) is also expressed via purposeful and humorous anachronisms that show up occasionally, such as the eating of popcorn out of a clear glass bowl (yes, I know they had popcorn back then, the settlers being introduced to it by the indigenous people they were appropriating land from, but here it’s more of its temporal contextual use). There’s also the breaking of the fourth wall as characters speak to the camera/viewer, and in a Jesus Christ Superstar (1973) moment, we see the dressing rooms and even some cell phones; and yet, it does not spoil the moment, but rather enhances it, since it is on some level a meta-play story.

As for the acting, well, considering the clunkiness of speaking Shakespeare’s dialog, the range is from Community Theater to some exceptionally fine work. For example both the fairy leads, Rizzo and especially Platt put in some stellar performances (see clip at the end). Josh Fontaine, as Nick Bottom, plays it a bit broad, but because the character is so full of bravado and ego (maybe he can play Trump next?), he actually metes it out at the right proportion for the role, and his monologue towards the end shows this.

The character that is the most central and known in the play is, of course, Robin Goodfellow, who is most commonly known as Puck. He is both the glue that holds the story together, and also who rips it apart through misadventure. He’s snarky (such as his famous line, “Lord, what fools these mortals be!”), impetuous and also a bit of a Loki archetype – with charm. I believe that the success or fail of this play is dependent on the interpretation of Puck. Playing him as a steam-punk (including the “circle-A” tee), with just-the-right-touch of glee, is the person I was hoping would do the part, as he is often in Griffin’s releases, is Johnny Sederquist. In the wrong hands Puck can be seen as capricious, manic, or even mean. Johnny just nails it.

The language of Shakespeare intimidates many, tis true, but when you have someone at the helm who loves the work, and is willing to put his own stamp on it without mucking it up (e.g., I once saw Hamlet on Broadway with Ralph Fiennes in the title role, where they did the entire play, speaking quickly throughout due to length of time; it was like watching a 33-1/3 being played in 45). Griffin shows here that even with a meager budget, a dedicated troupe of regulars and newbies to his releases, and some ballsy direction (and some fine editing, I might add), he can make Shakespeare palatable to even the casually educated.

Posted by Robert Barry Francos at 12:45 AM No comments: