DVD Review: “Fan of the Dead”, Dir by Nicolas Garreau 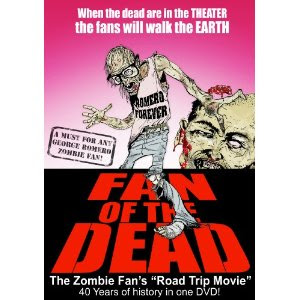 I have no memory of where I was when I heard about the killing of Robert Kennedy or Martin Luther King, but I know exactly where I was when I first saw George A. Romero’s Night of the Living Dead (1968). It was at the Walker Theater in Brooklyn, during a revival showing in the early ‘70s. Whatever the opening film was, the three tough Bensonhurst guys behind me kept kicking my chair and harassing me; but I refused to move. Then NotLD came on, and by the time it was over, we were all sitting together. 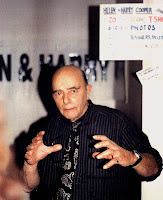 [Karl Hardman, who played Harry Cooper in the first film; he appears in this documentary (d. 2007)]

The director / producer / writer of Fan of the Dead, Nicholas Garreau, is fascinated by all things George A. Romero. We watch as he plans a three-day journey from his home in France, and chronicles his journey to the Pittsburgh area, which is to Romero as Maine is to Stephen King or Baltimore to John Waters. In those short days, he plans to seek out locations that Romero used in his films.

While the main focus of this documentary is the original Romero trilogy of NotLD, Dawn of the Dead (1978) - which Garreau calls by its European name, Zombie - and Day of the Dead (1985), he also seeks out the Night of the Living Dead remake (1999; Romero screenplay) and even one segment of Creepshow (1982). Most likely it was time constraints that kept him from searching for the locations of Martin (1977) and The Crazies (1973), not to mention lack of said zombies. 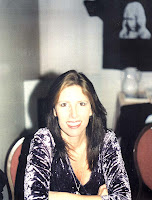 [Kyra Schon, who was little Karen Cooper in the first film (her character in on the shirt in the background); she appears in this documentary with Karl Hardman, her real father]

Garreau, whose musings to his hand-held camera are translated from French by a narrator, is a true fan-boy, and I use that term affectionately. He is both bemused by what is happening and the people that he meets, and giddy with excitement – in the words of Ed Grimley – like waking up Christmas morning and finding a whole fort, y’know.

The chapters are broken up into days, with titles of the films whose locations were visited on that day. Most of this is essentially a road trip as he travels from location to location, and his honest exhilaration is catching. His giddy look at lamp posts, elevator doors, and where houses used to stand, is catching, and you just want to say, bon pour vous. When he finds the now iconic basement from the first film (nowhere near the house indicated in the film), you, the viewer, almost want someone there to high-five. 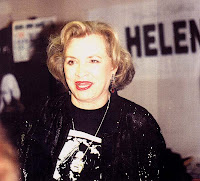 [Marilyn Eastman was Helen Cooper, and a cameo as the zombie who eats the bug off the tree in the first film]

The centerpiece of the film is a trip to the Pittsburgh Comic Convention, where Garreau interviews some of the actors who played both major and minor roles in the trilogy, and then he goes on a tour of the mall in which the second film is set, let by one of the film’s stars, Ken Foree (who was also excellent in Stuart Gordon’s From Beyond, I would like to add). This sightseeing expedition is accompanied by some of the same actors, who narrate for the fans who signed up for the tour (hell, I would have gone). The viewer can tell how much the actors (including Foree and David Emge, two of the four main leads) are enjoying not only the attention from the fans, but getting to share their experiences (e.g., “This spot is where…”). Garreau has obviously made a good impression on them, as they acknowledge him by name more than once.

Garreau’s extensive knowledge of the series is evident as he wonders through graveyards indicating the actions of a scene by the names on the stones which appear in the film. And yes, he does say the line, “They’re coming to get you Barbara” at the appropriate spot, as I’m sure many others have. As I would.

I’m just sorry he could not use some of the footage from the films to compare then and now (especially since the first NotLD is out of copyright and readily available), so unless you’re a fan on Garreau’s level, I would recommend viewing at least the three original zombie films (68-85) before watching this. Certainly, I recognized the cemetery and mall that was central to the first two, but I’m less familiar with the third one, so the locations seemed less of a bonus to me (though I intend to re-watch Day of the Dead, and then watch this documentary again. As for the remake of NotLD, well, Romero was the screenplay writer, and it was directed by Tom Savini, so it seems a bit out there, but what do I know?

This is a love letter to George Romero’s work, and both to and for his fans.

The bonus tracks include a photo collection of the trip, and some older psychotronic trailers (such as “Horrors of the Black Museum”), snack intermission shorts, and some regional restaurant ads that were shown in theaters. All fun stuff.
Posted by Robert Barry Francos at 7:57 PM