DVD Review: Kid Creole and the Coconuts, Live at Rockpalast1982 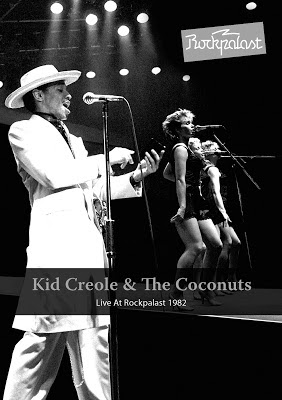 Y’know, I often complain about how so much of the music related to the Top 10 charts over the past few years is actually theatre, and is essentially the same song with compressed sounds over and over, often using the same dance moves. I mean, Nicki Minaj and Ke$ha are pretty interchangeable, with no aural va va voom.

However, theatre and music (as opposed to musical theater) can work. One prime example is, say, Alice Cooper during his Billion Dollar Babies and Welcome to My Nightmare period of the mid-‘70s. But for sheer entertainment value, it’s hard to top Kid Creole and the Coconuts. Sure, David Johansen tried to step on Creole’s stylistic wave in his Buster Poindexter phase, and while he became more successful thanks to his stints on Saturday Night Live and the infectious “Hot, Hot, Hot,” it was a rip-off of KCatC – albeit a joyous and totally enjoyable one.

With an incredibly large multicultural and pan gender band including three backup singers / dancers called the Coconuts, August Darnell is in control with his zoot-suited character, Kid Creole. The music is mostly Latin based, with a touch of reggae and even a smattering of disco-influenced rhythms and proto hip-hop; there is lots of dancing, movement, storylines, and a whole lot of fun.

While I don’t think it would be fair to say that there is a narrative that goes through all the songs, there certainly is a motif, with each one is acted out using different characters, including the songs led by band co-founder Andy “Coati Mundi” Hernandez.

Many of the songs are humorous, such as “Table Manners,” “Mr. Softee” and “Annie (I’m Not Your Father),” where the Kid tells the titular girl, “If you had my blood / You wouldn’t be so ugly.” This, like most of the material, is a rave up, everyone is pretty drenched in sweat early on, but they never let up. Even with the rare slow numbers, the energy level is high, such as the lovely “Dear Addy,” which shows off the strength of Kid’s singing.

The camera keeps up with the action without doing that MTV-style quick editing that is so annoying (and always has been), which is commendable on many levels; there are also no claustrophobic close-ups of nose-hairs and the like. Plus, considering when this was recorded, the image is incredibly crisp without that dated video fuzz, and the 24-track music is sharp and clean. This is especially true considering this was probably transferred from the PAL format.

This release is actually a double DVD, with each one averaging two hours. That is a whole lot of finger and toe tapping for the viewer. There is lots of interaction between band members, the Kid, and the Coconuts (one of whom includes Darnell’s ex-), who have quite a few costume changes

The first disc is the second recorded show, starting on October 16th, 1982, and lasting into the next day. It’s filmed at the huge German showplace, Grugahalle Essen, in Cologne, part of a Rockpalast-sponsored festival. The enormous crowd, who aren’t seen too often, are obviously into the sound when the camera does focus on them. During the last samba song, “Malaise D’Amour” (translates as “Love Sickness”), the band conga lines through the audience, who joyfully join in… well, those who don’t dance on the stage, that is.

The second disc was recorded a few months earlier, on June 3, 1982, at the much smaller Sartory Halls, also in Cologne (seems to be about the size of Irving Plaza, in NYC). Story goes that this show was so well received, they were invited to play again at the much larger hall of the first disc. Despite the high energy, the sound quality for this show is a bit lacking compared to the first, though the high energy is definitely present and easy to get into the groove; the image is also a bit grainy and occasionally has the blue horizontal lines wavering. However, note that there is something intimate and gratifying about this performance, though the later show may be considered more of a definitive record.

It’s a consistent party over the two discs, with the songs being long, averaging around 6 minutes, though there are a couple that are a few that last well over 12 minutes per. And yet it all goes by so fast because it’s so much fun. This is even good listening with the sound alone. As a sidebar, it’s a joy to cook while it’s on (which I did my second time through).

The two extras, one per disc, are the trailer for the set, and a 10-minute-plus pre-show interview at the Sartory Halls, which is a humorous mix of English and German.

Posted by Robert Barry Francos at 7:36 AM No comments: 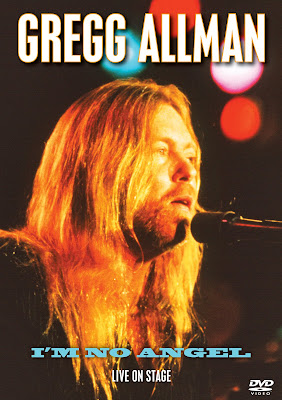 Southern rock certainly had its heyday, mostly from the very late 1960s via the early works of Texas’s Winter boys¸ Johnny and Edgar (that is until Johnny saw the error of his ways and took a more purist blues route in the early ‘70s) through the early ‘80s.

Along the way, some the stars included Lynyrd Skynyrd, Black Oak Arkansas, ZZ Top, arguably Tom Petty and the Heartbreakers (who were initially lumped in with the punk movement for some gersh-dern reason), and especially the Allman Brothers, led by Gregg and Duane (until the latter up’n died in 1971, though the band kept going for years afterwards).

What these bands and this genre had in common was a heavy reliance on the blues (ironically more of an electric Chicago style with some dirty Delta chops), an absolutely blazing guitar upfront, a singer with a gravelly voice, and for some reason long blonde hair upon the vocalist’s head (often accompanied by facial hair). Sure, there were some more blues purists, such as Stevie Ray Vaughn, but Southern rock was more into some heavy bottom-end rhythm and pyannah (that’s piano), usually electric for this genre.

Even after the metamorphosis of the Allman “Ramblin’ Man” Brothers after Duane’s dreadful death via motorcycle accident at age 24, Gregg kept the band going, but eventually giving it up and forming his own Gregg Allman Band (also known as Gregg Allman and Family, again seeming ironic to me), which is represented here. Recorded at The Cannery in Nashville, in November 1988, it was after their second LP, and just before the collapse of this line-up at the end of that year.

Honestly, I believe that calling this the Gregg Allman Band (GAB) is inaccurate, actually, since most of the heavy lifting is done by ace guitarist, Dan Toler. Sure, Gregg sings away in a sort of distant, almost I’m-somewhere-else mode, Toler works his finger magic, and actually has more solo time in the songs than does Gregg vocals. But the Allman name has the clout, so this is technically his group. While singing in that recognizable relatively minor growl (compared to some other Southern rockers), he tinkles at a two-level keyboard, but even that seems kind in half-hearted compared to the occasions when the other keyboardist, Tim Heding, does his Jerry Lee speed (especially on the finale of the Sonny Boy Williamson cover, “One Way Out”).

There is absolutely no talking between songs including individual tune introductions (Johnny Winter is great at that, albeit self-depreciating at times) by anyone in the gropj. Most of the tunes are either from the Allman Bros. period, or written for the two GAB releases from the mid-to-late ‘80s. Honestly, the earlier numbers are the one that resonate, and have more of a pure feel. “It’s My Cross to Bear” (written by AB guitarist Dickie Betts), “Don’t Want You No More” (a Spencer Davis Group cover), “Just Before the Bullets Fly” (by Warren Haynes), and “Statesboro’ Blues” (classic by Blind Willie McTell) have a more genuine feel from the band.

Some of the later-recorded numbers, such as the awful “Slip Away” smacks too much of ‘80s gloss and riding the Top-10 attempt wave. Perhaps I’m seeing what I want to see, but Allman seems to bland out even more on these tunes, like his heart just isn’t in them. Another assumption I’m making is that as Gregg Allman went through treatment for substance abuse in the mid-1990s, so he may be a bit absent for other reasons.

I think it’s important to point out that whatever weak link the leader of this group is, overall the sheer power of the rest of the troupe hauls his ass out and makes this a strong entry, whether you’re a fan of the genre or not (I’m admittedly closer to the latter, but respect the workmanship).

Despite being originally shot on video and transferred to digital, the image is pretty good, if a bit grainy, but the sound is pretty sharp, as that is more of what is necessary.

Set List:
Don’t Want You No More
It’s My Cross to Bear
Sweet Feeling
Just Before the Bullets Fly
Fear of Falling
Demons
I‘m No Angel
Statesboro’ Blues
Slip Away
One Way Out

Posted by Robert Barry Francos at 1:59 PM No comments: