All convention FFotos on this blog © Robert Barry Francos

My pal, Boston’s music journalist (and so much more) Joe Viglione has been involved with the national college radio convention, run by the Intercollegiate Broadcasting System for 15 years. This year , the 68th annual convention was simply called IBS/2008, and was held at the Pennsylvania Hotel in NYC. 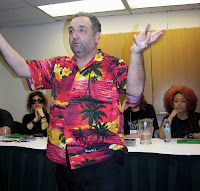 [Joe Vig center]
As someone had doped out of the first Saturday panel on March 8, titled “Radio on the Tube? Working with Public Access and College TV Stations”, he asked me to fill in. Even though was not my area of specialty, I figured, hey, DIY, why not? On my badge, I wrote FFanzeen (my blog) / Jersey Beat (for whom I write) / and Videowave (a cable access show I’ve worked on for my friend Alan Abramowitz since the early ‘80s). REPRESENT! For this panel, it was the latter for which I was there as it was the closest my experience would fit. There were about a dozen people from college stations there, which is actually a good counting considering the time, and hard rain. 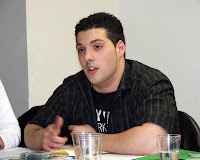 [Jon Pagano]
Joe Vig moderated, and doing an excellent job of it, I may add, even with the loud Hawaiian shirt. The panel included a couple of people running college television start-up stations, and a quad of djs from the University of Stoneybrook (USB, who was also a co-sponsor of the event) radio station’s popular urban music show. The USB group basically took control of the panel, which was fine since they were quite personable and amusing (I’ve seen my share of dry panels). Plus, it worked out great for me, as other than explaining about the indie nature of Videowave, its historical and present importance, and contact (www.myspace.com/videowave), the panel topic was something in which I was not very well versed. But I held my own, and I must add I had fun doing it. It was the first time I’m been in this position since presenting my paper “The Role of Technology in the Birth and Death of Rock and Roll” at the Media Ecology Association conference in Mexico City last summer. 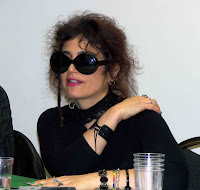 [Rew]
After the panel, I hung around to listen to the next session, “Independent Labels and Your Station”. There were a bunch of artists and labels (e.g., Bee, from the band RewBee, and the two guys who run Backlight Records, who put out Holler, Wild Rose) represented there, and it was well moderated by John Ottaviano. There were many interesting going back-and-forths between the panel and the station reps, on how to get bet the attention (and product) of the usually cash-strapped indies, and how the small record labels can best serve their target college market. It was an interesting hour. 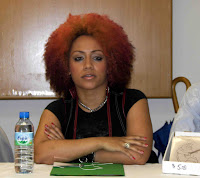 [MilitiA]
Though I wanted to see the next session, which was a similar indies-stations topic, I more needed to grab some food, as I hadn’t had breakfast. I ran out of the hotel, getting pretty wet, and grabbed some grub. Coming back, I was heading toward the panel that had already started, and ran into Joe Vig in the WIBS Glass Studio (which was just outside the Zurich Room), who was checking his multiple emails and Web sites. We started talking, and was joined by the wife of one of the present panelists, Joe Vignola (Joe Vig was joking how much their names were similar, and how she was married to both of them). We three talked about music, DJ-ing, and Joe Vig’s ongoing battle with his local public access station near Boston. At some point, we were joined by IBS Chairman and Executive Vice President Len Mailloux, who had a magnificent FM-classic deep voice. He talked about his alcohol-fuel younger days, and how all his teeth were about to be yanked in a couple of days! At some point, I realized I was not going to get to the panel, so I just sat back, hung out, and relaxed (and took advantage of a very small and finally empty bathroom). 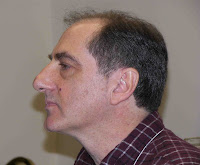 [Wayne Robins]
When the missed session ended, I headed into the room for the next one, as I was looking forward to it: “An Audience with…Wayne Robins, Author of ‘A Brief History of Rock, Off the Record”. I was a fan and irregular reader of CREEM Magazine (introduced to it by my buddy Bernie Kugel in the early ‘70s, when we were still in high school), for which Wayne regularly wrote reviews and articles, so I wanted to hear him speak. His session was facilitated by IBS President, Norm Prusslin. Norm gave a very brief into, held up the book, and started asking Wayne about how he got into the biz. All of it was interesting, but honestly, at the time I wanted to hear more anecdotes, like when he told about how he played air guitar with Keith Richards in a hotel room around the time Richards was involved with the Chuck Berry project, “Hail, Hail Rock and Roll”. However, I also understand that (a) he was there to promote the book, and (b) these were college students interested in a how-to get started. Wayne came across a gracious, and a good oral storyteller. We touched base after, and Wayne said he’d have the company send me a copy of the book, so hopefully I’ll be able to share it with a review. 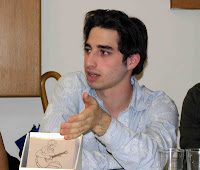 [Phil Minissale]
As soon as the session was finished, I am-scrayed to a birthday party WAAAY uptown, on the East Side, getting soaked in the heavy downpour. Considering how screwed up the subway was that day (only thing worse than the weekdays are the weekends…don’t get me started). Staying as long as I could, feasting on the likes of cheese and fruit, lasagna, coffee, and of course birthday cake, I headed for the long train back to the conference. Luckily, it was only drizzling at this point, and the trains, still slow, got me back just as the next session was starting, and it was one I wanted to see. 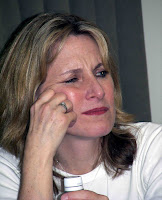 [Jan Horvath]
Titled “Musicians Showcase: An Audience with the Bands”, the scheduled guest list included three artists who had CDs that I had just reviewed for Jersey Beat: Jeff Mastroberti, Jan Horvath, Peter Calo. While Jeff and Peter were no-shows, the rest of the panel was interesting and definitely lively. From left to right, it was co-moderator and USB DJs Keri Fico, Jan Horvath, John Pagano (of JP Blues), Rew Starr (RewBee), Matt Clunie (Love, Robot), Ryan MacNeill (Madison Project), MilitiA (Swear on Your Life), Phil Minissale, Jan McComsky (Holler, Wild Rose), singer Jann Klose, Roberta Piket, and the other co-moderator who is also a DJ at USB, Anthony “Dob” Dobrini. While not an official moderator, Joe Vig helped move everything along.

[Matt Clunie, Ryan MacNeill]
The artists seemed very present, and were open to suggestion and needs by the crowded room of members of the college radio world, and the like. I also got involved by making comments on how the artists can help themselves and what we journalists needed to help promote/review their releases. In that way Jan Horvath realized that I was the one who reviewed her CD for Jersey Beat, which raised a big smile on her part, which made me feel acknowledged positively. Thanks for that, Jan!

[Jan McComsky, Jann Klose, Roberta Piket]
One of the things that impressed me about this panel was the wide range of styles represented, such as metal, folk blues, electric blues, singer-songwriter, pop rock, poetic rock, and jazz. There really did need to be some urban style present, even if I am not a fan.

By the time the panel was over, I had CDs to review from John, Matt, Ryan, MilitiA, Phil, and Jan. And shortly after I received one from Rew, and Jan had promised to send one as well. As I said, I had already reviewed Jan’s CD. What I’ve heard I’ve liked, and the reviews will appear in Jersey Beat (http://www.jerseybeat.com/; my column is called “The Quiet Corner”).

I am sorry now I hadn’t gone to previous conventions, and look forward to seeing them in the future, if I’m in town.