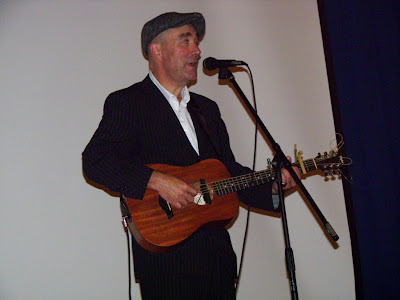 On September 12, 2009, at the annual meeting of the Institute of General Semantics, I had the honor to introduce British singer John Watts. He was around for the second wave of punk (the UK phase), and he sold mil\lions of records. Below is the introduction I prepared, which tells a bit more about the man.

At one point, I flubbed reading, and ad libbed, “I can’t even read my own hand\writing.” Holding up the print-out facing the audience, I added, “And it’s printed!” That got a laugh, and I finished the intro.

It was also a pleasure hear him perform, and to talk to John at length toward the end of the well-attended conference. I shot the video with my digital still camera. The sound during the introduction is muddy, but the song itself came out, well, all right. Not as brilliant as the song, but there ya go. 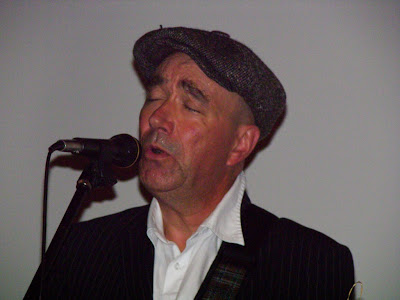 Here is what I said as the introduction:

In my role as a music reviewer, I am often expected to put labels on artists, to translate and place their sounds into a printed, time-binding medium which, given the ephemeral conditions of music performance and the possibilities created by recording, produces an oxymoron if ever I understood one.

There are two ways to consider a musician beyond category. One is to perceive them to be so out of the loop that they’re a sort of head-scratcher, and the other is to find them competent in so many styles that one label just won’t suit. John Watts falls to the latter group.

Where to start? Pop, punk, singer-songwriter, poet, filmmaker, humorist, troubadour, psychologist, multimedia artiste; these labels include only a few that could, theoretically, apply to such a wide-ranging set of talents, if General Semanticists were to endorse such a practice.

What we do know is that John Watts has been recording in multiple styles and across a wide selection of instrumentation for three decades, resulting in 17 albums, which have collectively sold over 2 million copies. Perhaps another descriptor could be “popular.”

Ever extending his repertoire, John’s new release is titled Morethanmusic & Films, a multimedia package CD/DVD, samples of which you may encounter tonight. If you are interested in a copy, the only place to get it is from John, so be sure to see him after.