Busy as a Swarm of Bees

Sorry about the lapse of blogs, but a lot has happened between the last one and now, including a Media Ecology Association convention in St. Louis, finishing packing, driving a 26' foot truck to the plains of Canada (where, it is said, it is so flat that if you stand on a cigarette box you can see a dog run away for three days), getting caught in major storms along the way, taking possession of our house, and so on and so on and scooby-dooby-doo.

Fear not, I have been writing in the meanwhile (long-hand!), and will start inputting as I can.

Thanks for your patience.
Posted by Robert Barry Francos at 11:08 AM No comments:

Lost and Found at the Brooklyn Library

As I infamously have dial-up in the apartment, sometimes it is necessary to go to the local public library for means of expediency. Plus, when my partner recently came to town schlepping her laptop computer, she needed a quick connection to the ‘Net for some large files. Again, the library seemed the way to go.

One Monday, we trekked over to the New Utrecht branch and parked in the public lot next door. The librarian sent her to where she could plug in her laptop, but we could not find where to connect the Ethernet cable to get on the Web.

I went over to the information desk and the nice older lady and the sweet guy with the comb-over had no clue what to do, and recommended we talk to the security guard. Vinny is with the NYPD, and works in the library system. I’ve seen him there a number of times, and he has always tried to be helpful to as many people as he can; he also gets cell hone yellers to tone it down (digression: why are cell phones even allowed in libraries? They should be checked in at the door).

Not sure what to do personally, Vinny directed us over to the local computer wiz, who always sits in the same place every day, it seems, which was directly across a table from where my partner was parked. Essentially, there is no plug-in connection, only wifi, which her computer was not equipped. Luckily, most of the work she needed to do was on the laptop, and she only needed to email it at the end.

While she started working away, I signed up for using the library’s public computers to check my own emails, etc. The way it works at the Brooklyn Public Library system is not too smart, nor fair. One gets two 30-minute segments per day and that’s it, no matter how crowded the library is, or is not. Because the system is all connected for the borough, once your hour is up, it is complete for all the libraries in Brooklyn.

After a 10-minute cyber queue, I got to one of the three computers that I can plug in my external 500-gig hard drive, so I could take some family photos I took this past weekend and put them on the hard drive, thereby clearing off the camera’s card and giving me room for when I go to the Media Ecology Association’s conference coming up later this month. Also, I got to organize some of the other pix on the drive and put them into their correct folders. Bonus.

When the first 30-minute segment was up, I checked with my partner and she was still busying working on editing a Word document. She explained that she was still busy, and I should sign up for the ‘Net again. Logging into the library’s queue again, there was a 30-minute wait until a computer was free and I could get access.

The library was quite crowded this day with latch-key kids, older Russian women, moms with screaming babies (including one at the computer right next to mine first time around), older people who can’t afford to buy books yet have lots of time to read, others who are unemployed, and the disabled, all who use the library as a gathering place to read the free newspapers and discuss the hot topics, in tones fit for their living rooms rather than libraries. There are just too many to shush, even for Vinny.

While I waited, I checked out the DVD section. I love renting free DVDs from the library. Yes, it is true that some people have no idea how to treat public property, and some of the DVDs are so abused they are unwatchable, but sometimes I like the more esoteric stuff that less people will rent. Besides, there are some films I would I would only watch for free, such as Hostel and Saw. I occasionally get surprised by what they do have, such as Short Bus and the awful ego-piece Brown Bunny (Buffalo 66 was so much better). The only one that stuck my fancy was the new Patti Smith documentary, but I ended up not getting it, anyway.

My time on the computer came up, and I let my partner know, but she was not yet ready. I took the 30 minutes to answer emails, check Facebook and MySpace, and the like. Then the second and final session of the day was over. My partner was still working away.

I read the newspaper for the day, and the one for the Saturday before, and looked at their splendid collection of graphic novels. Looking up, I noticed that my partner had finished her task, and now needed to send the project by email; but I had no time left of the computer station. We were about to go to the librarian for some help, when she spotted a computer that was vacant, but still had some time on it. In all the occasions I have spent in that library, I had never seen that happen. She jumped on it, used a stick that contained the document, and sent it, just as time ran out. Providence was definitely on her side, for sure.

After our excited Wow, can you believe the luck comments, we went to the checkout desk to find out about access in the future for her. Seems for $3 per day, a card can be purchased that gives one an additional two sessions as a “guest.” Then I realized that is why one is only allowed two sessions per day on their library card, so they have to purchase more time. Evil, but clever.

With that, we left the library and went home.

Looking around the apartment, I realized I cannot find my backpack that held my camera and my external drive. I start to panic. Looking and re-looking in every crevasse of the abode and even the car, the bag is simply gone. My stress levels were way up.

We talked it over tried to figure out the last place we remember seeing it. We both come to the conclusion that it was at the library, at the checkout desk. I was carrying the laptop bag and my backpack, and because of weight, I put them down. After the conversation was over, I picked up the computer bag and not the backpack. At least, that was what we concluded. 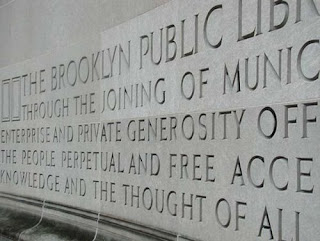 It was 9 AM, and the library opened at 1 PM. My partner, being the proactive wonder she is, called up the Main Branch of the library. She talked to a couple of people there, who eventually transferred her to the security division. In all the wonders of the world, the person who picked up the phone was Vinny, the security guard who was on duty the day the bag went missing!

She said, “My husband is sitting here vibrating because he may have left the bag at the library” (I’m shortening the conversation for your concern, reader), and he responded, “A blue and black bag?” Seems our imagined scenario was correct, and the bag was being kept behind the counter. Vinny said he’d call ahead and let them know I’d be coming.

We were elated, but still cautious because (a) there was no guarantee that it was my bag, and (b) there was also no assurance that everything would be intact within it.

When the library opened up at 1 PM, I was waiting. Quickly, I went to the checkout desk and told them about the backpack. The quiet heavily accented Russian librarian reached under the counter (in a place that was very inconspicuous), and pulled out what turned out to be, indeed, my bag.

“You have ID?” she asked, as I had quickly already opened the bag, seeing everything was still there: camera bag and its contents, and the hard drive. “Yes, and I’ll prove it’s mine,” I responded. In one of the pockets of the camera bag is my business card, with my name writ large (and a photo of Johnny Thunders I took at the Peppermint Lounge in the ‘80s). Taking out the card and putting it on the counter in front of her, I then reached into my back pocket and pulled out my driver’s license with my photo, and put them side-by-side. She smiled and said, “Okay.”

My legs were a bit watery as I took my bag and went to tell my partner the good news. While I have some obvious problems with the library system, it is more systematic that people-focused. The New Utrecht branch of the New York Public Library has my many and heartfelt thanks and gratitude for being menches.

Conclusion: I told this story to my pal Alan Abramowitz, and it wasn’t the rescue of the bag that amazed him as much as my obliqueness of leaving it behind in the first place. My partner and I had a good laugh with him about that. I’ll definitely be more cautious next time. I hope!
Posted by Robert Barry Francos at 10:19 AM No comments:

Some Last Look Views of Brooklyn: 2009

Here are some memories of Brooklyn, New York

2009:
What used to be the Walker Theatre, on 18th Avenue and 68th Street. All the great Italian superstars, like Pat Cooper and Mario Lanza would play here. When the theater shuttered in the '80s, the beautiful interior was gutted the night before it was going to be declared a landmark. 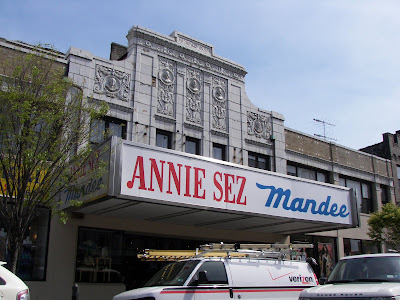 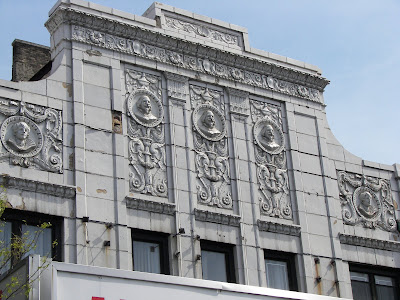 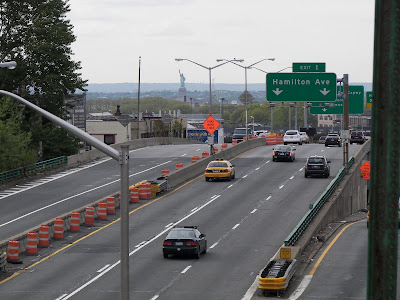 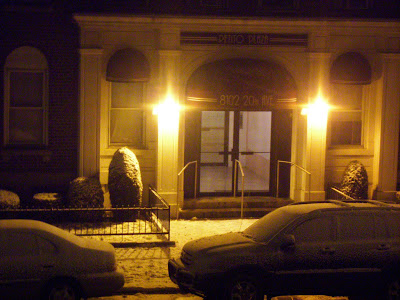