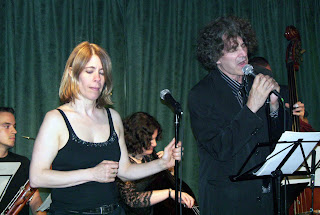 Many rockers and punkers, as they reach a level of maturity, seem to seek out a more varied means of expression. Even some hardcore SoCals have started releasing singer-songwriter output.
One of the more flexile artists over the past few years seems to be Dave Rave DesRoches. While not going through as many bands as, say, Kenne Highland, Dave has shown his versatility through such diverse acts as the Shakers, Teenage Head (both back-up and lead), The Dave Rave Conspiracy, and Dave and Agnelli (to name just a few). While there has been some consistency in his pop rock/punk, he also has not stagnated into a formula. One may say he’s more of an auteur. This is quite evident listening to his CDs, “The Dave Rave Anthology”, volumes 1 and 2 (Bullseye Records of Canada).
Lately, Dave has collaborated with Mark McCarron, a first-rate journeyman jazz/rock guitarist. Mark has deepened Dave’s palate, as has Dave’s association with Vancouver’s Bongobeat Records’ founder, Ralph Alphonso (who used to manage the Toronto punk band Diodes, and now fronts the more jazzy RALPH).
Dave and Mark have now released a CD of (all but one) originals titled “In The Blues of My Dreams” (Bullseye). On April 20, 2007, Dave had a CD release party at D Lounge, off Union Square Park in New York. As a fan of Dave, I was interested in going. Also, I had just gotten my digi camera, so I was itching to try it out in a live music situation. End result was not great, but I’m learning. Link to the photos are below.
The place was warm and intimate, with an occasional celeb sighting, like
Television’s Billy Ficca. My partner and I sat towards the back, and settled in. While waiting for the show to start, I had the opportunity to finally meet Bullseye’s rep and v-mail tag partner, Lisa Millar. I was also grateful to get to say hello to Dave’s (sort-of) ex-musical partner, Lauren Agnelli, whom I first met when I interviewed her earlier band, Nervus Rex (I was the first!). Of course, this was post her gig as a rock writer, and pre her folkie days as a Washington Square). By the way, check out her own CD of chanteuse material, “Love Always Follows Me” (Bongobeat).
As the set began, Mark came out with his full group, including strings and woodwinds. This was a similar set-up as when I saw Dave play with the Vancouver group, Bedsit Poets (their CD is also on Bongobeat, but I have not heard it yet).
The music was quite fresh. So new, Dave had the lyrics with him. Between songs of life and love, Dave pattered in his usual and charming self-deprecating way, curly hair tussled and bouncing. He immediately put everyone into the groove.
Most of the songs were off the new CD, like the catch-laden and very memorable “At the End of Day”. There was also “Sunday of My Dream” and the humorously sad, “Bad Day”, which had a bit of audience participation built in.
Of course, with Lauren in the audience, anyone familiar with them at all knew (and hoped) she was going to join in on stage for a few duets, and she even managed a solo.
On the way out, I made sure to snag a copy of the new CD, which I have to say, glows with Dave’s personality and Mark’s musical leading. I won’t lie, I would love to see Dave strap on the electric guitar again, but meanwhile, we can all enjoy his sounds for a rainy afternoon.

Randy Nerve/Toli Nameless/Kung Fu Grip, Vox Pop, Brooklyn, 6/22/2007
For those who don’t know, there is a small leftist bookstore on Courtelyou Road in Brooklyn that serves up great coffee, interesting lectures, and some diverse musical acts.
On June 22, 2007, I moseyed over there. When I arrived, The Sea That Dried Up was on stage, who is basically a guy with a vibraphone and a feedback machine. He would hit a couple of notes, loop it, and then add a few more, until it was a continuous, loud, and incredibly annoying sound. I’m not a fan of electronica, and this is an example of why. I tried to be open, and looked through some books, finding one I liked. After a few minutes, I knew I had reached saturation, so I brought the book to the front, asked them to hold it, and went out for some pizza, hoping it was over when I was done with my two squares (aka Sicilian style).
When I got back, he was still on. I put in some earplugs and checked out some more books. After the stage noise ended, I took out the earplugs and went back for the book and a big cup o’ coffee, meeting the cool server who is a punker recently moved here from Boston. .
Then I sat down with my cup and waited for the first act I wanted to see, Randy Nerve. I got to know Randy from his previous group, the Nerve! The first time I saw them was at the belated Brooklyn venue, the Punk Temple. Meanwhile, I’d seen Randy perform solo a few times, and it was always enjoyable. 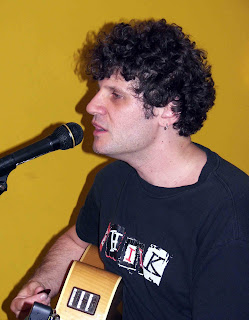 With a love of ‘60s rock (e.g., Pink Floyd) and punk (e.g., Ramones), Randy uses the acoustic guitar no different than an electric, as does Ed Hammil (Hammil on Trial), playing rock and punk styles on hollow wood. This gives his songs a dialectic reversed answer to Dylan going electric. Mixed with some Nerve! songs and cool covers, there was also some newer material he wrote solo, or with sometime writing partner (and ex-drummer of the Nerve!) Anthony, of Kung Fu Grip.
As Randy played, the place began to fill, including some familiar faces. Also arriving were KFG’s Anthony & Ricky, along with their lovely companions, Desiree and Laura (respectively). When not jumping around taking pictures (link is below), I sat with the KFGers.
Between sets, I talked to them about work, school, and overzealous subway cops. Anthony gave me a copy of their CD (myspace.com/kungfugrip), which I highly recommend.
Amid gigs, Randy is a regular subway busker, usually on the F line. During his travels, he meets other musicians. In typical Randy style, he invited the next artist to play this night, Toli Nameless. 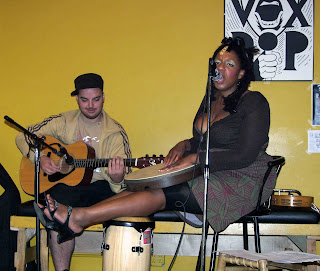 Toli is known for her jazzy vocals, and her trombone playing. She was accompanied by poet/rapper/musician Yako on guitar and percussion. When Toli opened up her case, it seems the trombone was broken, so that was out, unfortunately. But it also gave the audience a chance to listen to more of her voice.
Rather than jazz, Brooklyn native Toli focused on some political-dominated Rasta reggae, full of rev-o-lu-tion and social commentary. Very powerful stuff that surely would have made Marley proud. And through it all, Yako kept the rhythm going. 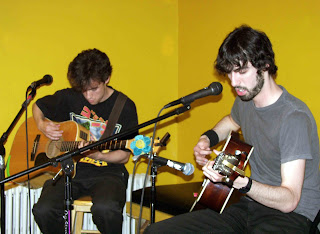 Last up were cousins Anthony and Ricky, formerly of Good Grief (led by Ricky) and now the core of Kung Fu Grip (led by Anthony). Ricky is a phenomenal guitarist and Anthony is a solid songwriter in the post-grunge vein. Together, in this case with both on acoustic guitars, they are quite formidable.
Their songs are actually quite adaptable from full rock band to softer acoustic, definitely lighting up the evening even more. I fought the urge to call out for some of their pre-KFG material like “Intro” and “Greatest Band in the World”. These guys are tight. It wouldn’t surprise me to hear of their success in the biz.
After saying my byes, I took a couple of pictures of Desiree dancing to Randy’s conga drumming. Yeah, this night, the rhythm was right.