This article/interview was originally printed in Big Star fanzine, issue #2, dated August-September-October 1977. It was written by its publisher, Buffalo (NY) Musician Hall of Famer Bernie Kugel, who kindly granted permission for this reprint.

When Bernie Kugel did this interview, he was on the phone, sitting on his parent’s bed, both excited and nervous. I know, because I was there, trying to listen in. Bernie kept looking at me and smiling as if to say, “Hey, I’m talking to Debbie Harry!” 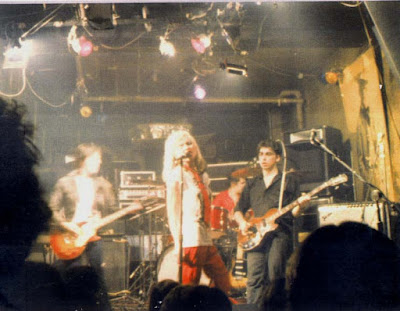 Blondie was one of the first bands we saw at CBGB during the early summer of 1975. They were opening for the Ramones, and there were perhaps a dozen people in the audience. We saw them again a few times together, and then after Bernie went off to Buffalo State College in 1976, I continued to see the band. In fact, they were one of the first groups I saw play the new stage at CBs, after it was moved to the right side of the room, and they started to fill the place (see the photo directly below, which also appears in the book The Encyclopedia of Punk Rock and Culture, by Brian Cogan). I have not seen them perform live, however, since the 1970s. – Robert Barry Francos, 2018
Blondie are about to release their second album [Plastic Letters] and with songs that are as good as “I’m Always Touched By Your Presence, Dear” and some other new tunes they are doing, it should be a strong album indeed. And in live performances, they just keep getting better and better, and the Iggy and English tours have really helps strengthen their shows. In fact, the last time I saw them in NY, I felt like I was watching five Iggys, ‘cause they were all using movements associated with Mr. Pop. So, don’t pass up Blondie, kids, ‘cause I think they should be making some of the best pop records around during the next few years. I spoke to Debbie Harry on the phone briefly before the two big tours and here a little of what she had to say:

“Yeah, I think we’re real fortunate. Every other band that’s got an album has been together for three or four years, and our band’s been together for a year and two months completely. And we got a deal to do a single [“X Offender”/ “In the Flesh” – RBF, 2018] and it right-away developed into doing an album [Blondie – RBF, 2018], which I feel is indicative of the strength of our material. We have a unique sound. We have a sound, and that’s very valuable. A lot of bands don’t have their own sound. Like they have a good sound but it’s not original; it’s not unique. And that’s the most valuable thing you can have. And I think that bands that have gotten album deals from the NY scene all have a sound that’s unique, and that’s what has to be.

“Before I was actively in a band, I used to just be more out in the audience and I wasn’t as particular; I didn’t know as much about what they were doing. Now I understand more from being inside of a band about what happens – what really happens. Yeah, I like Aretha Franklin and Dionne Warwick, things like that. I guess I admired Janis Joplin for her style; her vocal quality was, like, weird. I guess I like it ‘cause it’s unique and she could get a lot of feeling out of what she did.

“We like a lot of movies. Thrillers and monster movies. This Thursday promises to be a great day on TV with Mighty Joe Young and King Kong, two big ape movies. Chris likes a lot of Japanese movies. I like a lot of those old star movies with Peter Lorre, Humphrey Bogart and John Garfield, those creepy black and white things that are sort of fuzzy.

“Sometimes I don’t think I’m going to live much longer than tomorrow. It’s hard to become too political in this day and age for fear that you get up out of the way for saying too much, but I definitely think there should be some changes made. Who am I to be involved with politics? But yes, government is really fucked up.

“Patti Smith’s got a lot of fans. I think she’s really [great] at what she does but I don’t approach music from her point of view at all.

“We like Poe, Frank Frazetta, and Barry Smith. We’re all illiterate, really. Our favorite sports are egg-throwing and arsonry. Our piano player’s favorite sport is escaping; he’s an escape artist. I want to tour. I want to go to other planets, too. We want Coca-Cola in all the high school water fountains, anarchy in the streets and rock and roll.

“You from Buffalo? My mother lives Upstate. She always calls up the radio stations there trying to get our records played.” 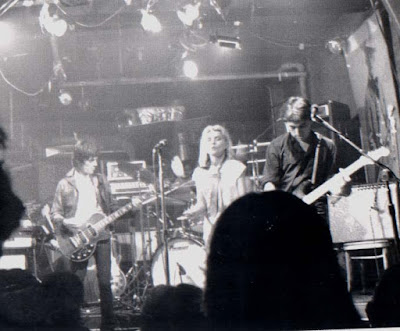