All photos taken from Web

During the much of the ‘70s, I worked at a couple of local movie theaters as both an usher and a ticket ripper. I had my little red jacket, white shirt and black bowtie as a uniform in both. 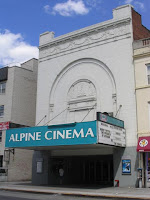 Alpine Theater
The second one, in the late ‘70s, was at the Alpine Theater, in Bay Ridge, Brooklyn. It’s the kind of place that events that happened sound like they are made up, but that is far from the truth. It was a period of cosmic weirdness, in an area made famous by disco, the 2001 Odyssey Dance Club, and "Saturday Night Fever". Here are some stories of working there; they are not chronological, but just as they come to mind. And this is just a smattering.

By the time I started the job, I had already been involved in the punk scene, and my fanzine was well underway, between my third and fourth issue. Of course, I was the only one there who had any idea about things like CBGB’s, Max’s, Ramones, or anything other than Kansas, Yes, CSN&Y, and especially disco. When Sid allegedly killed Nancy, the ushers kept teasing me. When Sid died, I knew they were going to really bug me about it, so I took one of those huge metal laundry safety pins and put it in my lapel. One by one the ushers came in and before they could say anything, their curiousity piqued, they asked, “What’s that?” I answered firmly, “Its for Sid!” They left me alone.

There is a book called “Billy Lives”, by Gary Brandner, which is basically a novel about the marketing of a rock star after he as died in an accident. It’s cynical as all hell, but one thing that made me buy it in the first place was the cover, which is a painting of a photo of the New York Dolls. It’s is a kind of crude rendition, but it’s definitely them (If I remember correctly, it was taken from the cover of the “Too Much Too Soon” LP). One day, in 1978, I was on my lunch break, and was reading the book while eating a tuna salad sandwich at the luncheonette diagonally across the street from the theater. I was sitting on a stool at the counter (where have all the counters gone, long time passing…) 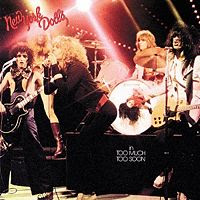 As I’m chompin’ away, there is a middle-aged woman sitting next to me is waiting for an order she placed. She turns to me and says, “Isn’t that David Johansson on the cover?” Mouth filled with tuna and a head full of “Wha?”, I nodded my head to the affirmative. She started saying how she was from Staten Island, and her daughter used to date him when they were teens. Took me totally by surprise. I mean, now it would not seem uncommon for someone to recognize him, even from a piss-poor drawing of him, since the Dolls have been around for so many years and David had such an illustrious solo music career (every middle class person probably knows “Hot Hot Hot”), or even his limp stab at acting, but in the ‘70s, someone that age would not necessarily be familiar…unless of course he took their daughter to the prom! 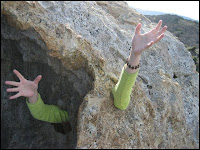 I’ve never been a fan of pot. Tried it, found it boring, so I stopped. Late one night, during the last show, one of the ushers pulls out a joint the size of my arm, and says, “Let’s smoke!” The manager had gone home and we were closing, so except for the dozen people watching the film and the candy counter person (who hadn’t had a sale since the film started), we had the lobby to ourselves. “Nah, I’m not interested, but you go ahead, I won’t tell.” He lights up, and before long, he’s leaning on a column, wrecked. I snuck up behind him and started whispering, “Reeses…..Reeses….Reeses.” With an anguished cry, he ran – nay, stumbled – over to the candy counter and bought three huge and expensive packages of the candy, then stumbled back to the column. Just as he was about to take a bite, I jumped up and make a goofy face saying “Boogah boogah!” He started laughing, inane as it was, because he was stoned. I kept doing goofy things to keep him laughing, so even though he had the candy, he couldn’t eat it, as it quickly melted in his hands. The next day, he was really mad at me, and probably rightfully so.

Late one night, I was in the utility closet putting away one of those tiny brooms, when the security-guard-for-hire walked in. “Hey, Larry,” I said. Without saying a greeting, he took out a non-legal handgun, cocked it, put it to my forehead, and said in a dissonant whisper, “You know, if I wanted to, I could kill you right now.” I quickly thought, “This is ridiculous…this guy isn’t going to kill me in a utility closet in a movie theater.” So I looked at him straight in the eyes and said, “Go ahead.” He uncocked the gun, lowered it, and said, “You know, you’re the first person that didn’t crap in their pants!” I thought, “What a jerk,” and left the closet.

About 20 minutes later, what he said came back to me, that I was the first person…. That meant he had does this to others. One by one, I questioned the other ushers, who were tough Irish and Italian kids, and they confirmed that sure enough, he had done that to just about all of them, which scared the hell out of them because many of them were “connected”, and a gun meant something else to them than it did to me. I gathered the boys (back then, ushers were male, cashiers were female), and we collectively went into the manager’s office. She was a morbidly heavy woman in her ‘60s who was known to walk through the lobby picking up stubs people threw down, and then sent them to the district office claiming them as refunds, keeping the cash. Her son was a police officer at the local precinct, so we figured she would back us up.

When we told her, she said, “So?” Not what we were expecting. We said, “We want your son to come down here an arrest him. He’s not supposed to be carrying a gun.” She said, “I don’t want to bother him, he’s busy.” I said, “You don’t understand: he held a GUN to our HEADS.” Her reply was, “I don’t want any trouble, so just ignore it.” The biggest usher, who was her favorite, said, “look, either he goes, or we all walk off the job together.” Finally, she relented and said she would ask for someone new the next day, but she wanted him to finish out the night because of the hour.” We agreed and started to walk out the door. Then I grabbed the sleeve of the big usher and dragged him back, and said, “You cannot tell him why. If he’s dumb enough to pull a gun on us, he’s dumb enough to come looking for us for revenge.” She looked like she was about to argue when the big usher said to me, “You go, I’ll talk to her.” He was in there for about 10 minutes and we could hear loud voice. Finally he came out, and gave me the thumbs up. It was the last we saw of the rent-a-cop, but you can bet we all looked over our shoulders for a while after that.
Posted by Robert Barry Francos at 2:18 PM No comments:

My apologies for the length between blogs here, but here is the reason:

I was recently let go from my job, and when they confisgated my laptop, they also took away about 30 CD reviews for my column in Jersey Beat, and about 4 blogs that I was getting ready to put up, including those dealing with the Media Ecology Association conference at Santa Clara University in June.

Also missing now are about 800 photos that I had PhotoShop'd of the conference, that I will have to redo.

Note that these were all done at home, with the permisson of the company, and not on work time.