This interview was originally printed in FFanzeen, issue #7, dated 1981, by Julia Masi. The band ended up with two LPs, Dirty Looks (1980) and Turn It Up (1981). Note that this band should not be confused with the San Francisco-based heavy metal band with the same name that came afterwards. – Robert Barry Francos, 2019.
It wasn’t long ago, two years to be precise, that Dirty Looks was living in relative obscurity in the sometimes forgotten borough of Staten Island, New York. Patrick Barnes wrote songs and played the guitar by himself, while he managed a health food store. The daily boredom that he experienced has served as a source of inspiration for his songs. A naturally optimistic person, Patrick tries to take the negative aspects of life and sing about them in a humorous light. With a repertoire of compositions like, “Take a Life” and “Drop That Tan,” he set out to form a band.

Patrick enlisted the aid of Peter Parker, a drummer posing as a longshoreman. Most people ask Peter how a longshoreman got into rock’n’roll, but Peter asks back, “How did rock’n’roll get into a longshoreman? The music was always in me.” He displays his affection for other bands on the lapels of a white leather motorcycle jacket that sports an impressive collection of buttons and enameled badges. Peter joined his first band, Black Horizon, when he was nine years old, playing covers of pop tunes – and he hasn’t put his drumsticks down since. 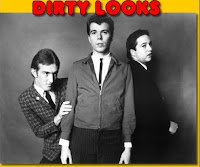 Marco Sin [aka Marcus Weissmann, d. 1995 – RBF, 2019], the brown-eyed bassman, completes the trio. Always determined to find a place in the spotlight, Marco looked upon his temporary day jobs “operating computers for rich corporations” as “something to keep the hands busy and the mind free for daydreaming.” But the daydreams became reality almost overnight as Dirty Looks started playing clubs in the New York area. Within a few months they had legions of fans and a contract with Stiff/Epic Records. They flew to England to record their first album, Dirty Looks. It received rave reviews on both sided of the Atlantic when it was released last Spring.

In the Fall, they jumped on the Stiff coach and embarked on their first major tour of the United States and Europe. At the Ritz, during December of 1980, on the last night of the “Son of Stiff” tour, they sat around the dressing room and talked about what it was like to get their first taste of international stardom. 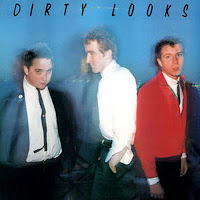 “Paris might’ve been our best gig,” Patrick speculated, “and a great audience at the same time. Spain and Portugal were a lot of fun, but they were huge places. We played at sports arenas; kind of, like, indoor soccer places. And there was so much echo, whether we were playing tight or not, or we were out of tune, we wouldn’t know and neither would anybody else. We had a good time, but Paris was more like a place like (the Ritz).” He looked around, “Very similar to La Palace. They didn’t know anything about us ‘cause the record hadn’t been released there. And that’s a real good feeling when you totally win over the crowd. They don’t have any preconceived notions. At least they don’t have any positive ones. They haven’t been, kind of, told what to like, and they have to just decide on their own.

“It’s always exciting for us in New York, ‘cause it’s our home town. But in most of the big cities, sometimes you really have to win them over ‘cause they’re so jaded. They get to see everything.

“The worst reaction is nothing; that kind of boredom where people say, ‘Hmmmm,’ and they’re just thinking about us and not there to have a good time. To me, the idea is just let go and go crazy. 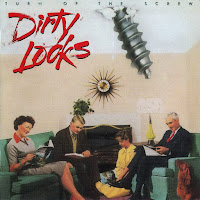 “We had bad press in England. They hate American rock’n’roll bands; they think we’re slick and shallow. Things turned around after we toured. One paper that was the most vicious against us actually had pretty much of a turn-around review. But when you’re right there, in England, it’s kind of weird. They really don’t get the right impression.

The crowds in Europe were larger than the band was used to at home. On the average, they were playing to three or four thousand kids per show. “They’re really enthusiastic. They’re not quite so,” he leans back in his chair and fakes a yawn, ‘Oh, another Stiff tour.’ They go crazy. It’s great. They’re,” he sits up straight, his body shaking slightly and his hands waving in the air, “’Another Stiff tour! Alright!’ A lot of times it’s like that in the States, in the smaller towns. And in Ireland and Scotland, they were enthusiastic. Whenever you play small smaller towns, you get that real feeling of excitement.

“In Milan, it was funny,” Peter noted, “Whether they like you or not they’ll toss things at you. They toss these 100 lire coins. They’re about the size of a half dollar. I must’ve gotten hit by about twenty of them,” he mimed dodging the coins, “in the back of my head. I got hit by a Coke can on the back of my wrist. Thank God it was an empty Coke can. They had this huge sack of pamphlets, about this size,” he demonstrated with his hands about six inches apart. “And they just tossed them all at Marco. They just went like bumpf, all over him. By the time we left the stage it was covered with paper.” He continued to describe how the band was bombarded with a fleet of paper airplanes. “Their paper airplanes aren’t ordinary paper airplanes where you just fold ‘em up and that’s it. They really get into building them. They rip the little corners for the wind and everything else like that. And when they threw them,” he shakes his head and smiles in admiration, “boy, those suckers flew!”

“They stone bands there,” Patrick added. They throw little rocks. We were the last band on in Italy because we were the most known. And if they like you, they throw even more things. By the time we got on it was really ridiculous. The stage was this high,” he lifted his hand about a foot-and-a-half above the table, “with paper. It was filmed for Italian television and we were cursing out the audience. We thought, ‘This isn’t gonna be able to be used,’ but the Italian television people loved it. They’re really nice.

The band really seems to love being on the road. “It’s lots of fun just being paid to go out and see the world. It’s a great job,” Marco boasts. And they only cited two real problems about the tour: getting their laundry done and finding good food. Patrick adheres to a vegetarian diet that posed a few problems in Germany and at roadside diners. 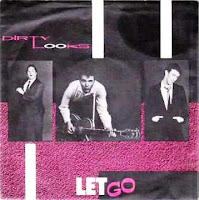 “A lot of people think rock’n’roll is just a lot of fun,” but according to Peter, “It’s like a regular job. We have to get up early, and we get to bed late.” And travelling by coach didn’t make it any easier. “You fall asleep standing, holding onto the railing. You train your body to sleep in any uncomfortable position you could ever possibly think of.”

“But I don’t mind,” Patrick interrupted. “It’s really fun. Other jobs where I had to get up really early, it was like – " he lowers his eyes, leans his head back and thumps down in the chair, letting out a deep sigh. “I don’t really mind getting up early when it’s just to get the bus to drive to Paris. I can handle it. I can sleep on the bus,” he snaps his fingers, “like that. You learn to when you have to.”

“What I liked,” remembered Marco, “was the fact that wherever we went, whatever new country it was, you know people were coming to see a show, coming to listen to some rock’n’roll and to have a good time, and that language or whatever didn’t matter. Nothing else mattered except the fact that it was a rock’n’roll show. It was good. I can’t wait to go to Australia, Japan and South America. I’ve never been there.”