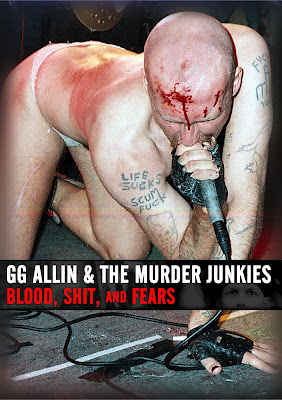 By this point, does anyone reading this need to be told that GG and his band (whatever incarnation it may be, whether the AIDS Brigade, the Jabbers, or the Murder Junkies) were fucked up? Even relatively among those who backed him, GG seriously walked the walk, talked the talk, and ate the poop, both figuratively and literally as is shown numerous times on this collection of full shows.

Let’s face it, GG had to die, because there is no one could have lived that an extreme a life, full of violence, substance abuse, and malevolence towards an audience, without it taking its final toll.

The thing is, though, despite the arguably despicable lifestyle, GG could write a great song; “Drink, Fight and Fuck,” “Bite It You Scum,” and “You’re an Asshole,” are good examples. Yes, they were not necessarily ditties you’d want to play for your auntie’s tea (depending on said auntie, I guess), but the melodies are solid and catchy, and the lyrics, well, they’re hard to make out just like any other hardcore song anyway. And they’re no more (or less) disturbing than some other period bands, such as the Angry Samoans (“They Saved Hitler’s Cock”), the Sex Pistols (“Belsen Was a Gas”), or even the Hoosier proto-punks, the Gizmos (“Pumpin’ to Playboy”).

Actually, GG was not even an originator of antagonism to the audience, what with being preceded by Suicide and Red Transistor, a band led by Von Lmo who would chase the patrons out of a club with a whirring chainsaw.

For me, as has always been with GG, it still comes back to the music. I still have the demo tape he sent me from when he was starting out in New Hampshire, and it was the songs that attracted my attention. Did I ever go see him perform live? No, I admit I’m either too much a coward, or love myself too much to put myself in that much real physical danger.

Watching the five shows on this DVD, authorized by GG’s brother and bassist, Merle, it is clear the audience both likes and fears GG at the same time, giving him plenty of room to roam and fling his poop. Those who remain close enough to his orbit get pulled in one way or another. Some antagonize him by throwing things like bottles or cups of beer, or getting in a punch themselves. Perhaps they didn’t realize just how fearless and ruthless GG was when in performance mode. And yet, as soon as the altercation cools in any way, he’s back to roaming like a shark through the ocean, nearly naked as a jaybird, egging on others. In fact, at the end of the first show, the camera follows the band backstage, and GG shows a vertical scratch across his belly where he was cut with a knife by an audience member.

Wisely, GG and crew had a camera – er – crew handy for many of their shows. Sometimes even the cameraperson ends up on the wrong side of the GG stick, but with multiple cameras, all the action is captured, and is now being fed out to a still legion-size of adoring fans (it’s easier to be a follower being separated by six feet of earth).

There is an 18 month gap between the Live Shit and Bonus Blood extras. The quality of the shows varies somewhat (such as there being some pretty steady feedback happening throughout the Fuped Duck show), not to mention the inconsistencies of the camcorders used, some of which produces video “noise.” Plus, the N’orleans show is really dark, as the only lighting is from behind the stage.

One of the nice aspects of this DVD is that you can search by show or by song in each performance; this gives you the option to hear a specific piece, and it gives you the songs titles that way.

You may need a strong stomach to watch some of the antics that go on, such as when he does a, well, Pink Flamingos, but it will keep you glued to the chair to see just what the hell he’s going to do next. R.I.P. GG.

Posted by Robert Barry Francos at 1:17 PM No comments: