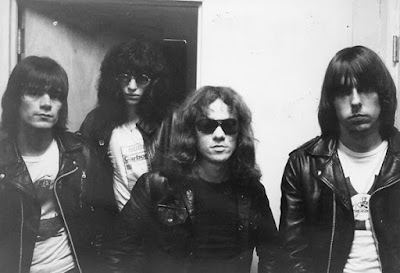 This interview was originally published in Foxtrot, November 1976, credited to Bernie Kugel and “Robert Baa-ree Francos.” : Foxtrot was the student newspaper for Buffalo State College (aka Buff State), and they were open to the new music that was coming out of New York. The Ramones would play there not long after, sharing a bill with the Dictators that is now infamous among those of a certain age and music appreciation. I do not own the right to the article, even though I’m co-credited with it, but I also am not making any compensation by reprinting it either, i.e., the FFanzeen blog has no advertising.

On the night before the Ramones were due to leave for England on their first tour of the UK, in the summer of 1976, they played a gig a Max’s Kansas City. After the set, Bernie Kugel brought me along to the dressing rooms upstairs and we held an interview with the band.

First, we talked to the group as a whole in the dressing room, and then, with Joey by himself, we stood at the top of the stairs and had a really nice and long conversation. We’d seen the band quite a few times since early spring 1975. There are only minor grammatical tweaks made on the original article. 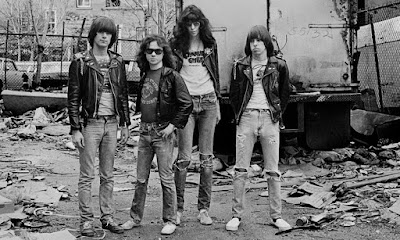 1.
Bernie Kugel: Do you foresee the Ramones being around in five years from now?
Joey Ramone: I think so.

2.
Bernie: I understand that in the beginning you guys didn’t all play the same instruments you play now.
Joey: Yeah, well, Dee Dee used to be the lead singer and play rhythm guitar. and we used to have a bass player, but he was like totally up the wall and had to be committed.

3.
Bernie: This is the famous Richie Ramone?
Joey: Yeah. I used to play drums, but I couldn’t keep up after a while. Dee Dee was originally a bass player and plays really good guitar, too. John was playing guitar… (Tommy was managing them - BK). It worked out really good. It was kind of weird in those days, too, yeah…

4.
Bernie: What was it like in the first few performances of CBGB’s and Performance Studios?
Joey: It was a small crowd then. But like there was one night we played at Performance and the place was jammed, you know? It was like fantastic cause everybody was so into it. It was like mass hysteria.

5.
Robert Barry Francos: How did you feel the first time you saw somebody wearing a Ramones shirt?
Joey: I was really excited, you know? I really get off on that, you know? I get off on little things probably and many people do, you know? I just find things like when we played the Bottom Line, and it was really loud, all the tables in the front people were going nuts, banging away on the tables and shit, all wearin’ Ramones T-shirts and yellin’ out for songs… it was really impressive.

6.
Robert: Do you get distracted when people start shouting in the audience? Like last time we were here and you played, (David) Johansen was screaming out from the audience things like “Heal me, I’m a cripple!”
Joey: Naah, naah, here’s to it, y’know? There’s always a few in the bunch.

7.
Bernie: Did you have aspirations as a kid to become a singing star?
Joey: I don’t remember when I was a kid… but I always did, yeah. I always thought I’d make it this way.

8.
Bernie: Could you tell us some of the things you were doing before the Ramones?
Joey: Yeah, I tried starting a business and writing, starting rock papers and shit like that, and I thought I could be good at all that, but what I really wanted was to perform.

9.
Bernie: Do you think any single member of the band would ever get too big headed and want to have a solo career?
Joey: Naah, it wouuldn’t happen. We wouldn’t let it happen. We’re all aware of why people break up and people get strong headed, and they think they’re too good, and get on big ego trips. We’re seen it. It wouldn’t happen. It just fucks everything up. Just fucks up our careers and everything, because people think they’re so good, and then then they’re just shit. Even if they are good, they’re not that good.

10.
Bernie: Are you satisfied with the way your career is going?
Tommy Ramone: Yeah. So far so good.

11.
Bernie: You think the early days were similar to what you’re doing now?
Tommy: Some songs, but they sounded different. They were in another dimension; now we’ve crossed into this dimension so that everybody could listen to it.

12.
Bernie: How would you describe the Ramones in the early days?
Dee Dee Ramone: Very positive… a bunch of nuts getting together. Then all of a sudden, we got obsessed with the whole thing, got new numbers in the group… then we just played; played all the time.

13.
Bernie: Did ay of you ever go to college or anything like that?
Tommy: A lot of us were thrown out of college… John went for two days, I think. He went down to Tampa University, right? And we all had a going away party for him, and he went down there. And I was walking down the street a week later and all of a sudden, I see him hanging out on the corner, and I say, “What the hell are you doing here? I thought you’re down in Tampa?” “Naah, I couldn’t dig that shit,” he says. They told him he had to do two hours of homework for every hour of school and he said, “Fuck it. I can’t take this shit, this is bullshit.”

14.
Bernie: Is it fun playing these days?
Dee Dee: Yeah, but people wanna hear the first album, and we’d rather play the new songs.

15
Bernie: Why don’t you other guys sing more?
Tommy: Sing? Joey is the singer! He’d beat us up if we sang!

Most of these remarks came from the conversations at Max’s Kansas City, in June of 1976.