GUN CLUB: Hot as a Pistol

I can’t speak much for the Gun Club, as while I own the record Las Vegas Story, I never saw them live. Now that lead singer Jeffrey Lee Pierce passed on in 1996, at the age of 37, that’s much less likely to happen. I had met two members of the band though: Jim Duckworth was in the Panther Burns when Julia interviewed them (and I tagged along), and Dee Pop, well, I’ve known since 1978, when he was drumming for the Secrets up in Buffalo, right after he left the Good (I saw a great show at Hallwalls Art Gallery then, with The Good, the Secrets, and George - for $1).

For those who were not around during the period of this interview, the Brooklyn Zoo was a club that existed for a very short time in Sheepshead Bay, Brooklyn, and has no relation to the zoo in Prospect Park. There were some major acts who played there (for example, I saw Iggy Pop, Bow Wow Wow, and Joe “King” Carrasco), despite it’s odd location and its medium size (about half the ground level of Irving Plaza). It was, however, close to the subway, but it was a time before Brooklyn became the “cool” place, and it was way on the other side of the borough from Williamsburg. According to the Website fromthearchives.com/gc/chronology3.html, this interview took place in February 1983. But, back to the band… - RBF, 2010 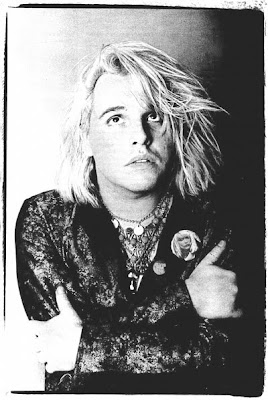 Jeffrey Lee Pierce slouches in his chair, blond hair falling into his dark brown eyes, his voice softening to the beginning stages of laryngitis, as he reads the headlines from the various rock’n’roll tabloids and daily papers scattered around the dressing room of the Brooklyn Zoo.

Brooklyn was the last stop before the Gun Club (Jeffrey, vocals; Jim Duckworth, guitar; Patricia Morrison, bass; and Dee Pop, drums) hit the road again for a three month European tour. They are anxiously awaiting the release of a single and an EP, both for Animal Records. And earlier that week, they began working on a video.

Jeffrey is noticeably tired. It’s 8:45 PM, and he’s already put in a full day’s work just trying to get the band to their soundcheck. The Brooklyn Zoo is buried like a treasure, in one of the more residential sections of the borough. The cab drivers, gas station attendants and smart-mouthed street kids will point you in the direction of the Prospect Park Zoo, a real zoo, which is nowhere near the club. Consequently, Jeffrey and company drove around in circles before they finally arrived for the soundcheck a mere two hours late.

“I think we went to the Bronx Zoo,” Jeff quips. “I’d thought they’d cleaned out one of the cages and we’d have a show. Play next to the lions. It would fit, too, the way we play.”

He frequently describes the band’s unusual link in the evolution of rock’n'roll as “noise,” a humbly accurate label for the vast stretches of improvised sound that the band unleashes during each set. Could this be a delve into Dadaism? Jeffrey just won’t say, but considering the collective musical backgrounds of the band, their style seems more akin to the structured disorder of Stockhausen, or Lou Reed’s Metal Machine Music, than the racket the Raincoats made a few years ago.

“I don’t see it as anything but noise,” Jeffrey says. “It’s just a bunch of noise right now. And it will be for a little while. Nothing musical really impresses me right now. I really don’t listen to music. 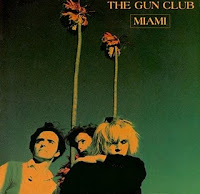 “Right now, I’m mostly listening to ragtime. I don’t play it. It doesn’t affect my music at all; it’s just something I listen to, like listening to Brazilian jazz.” He laughs, “It’s not gonna affect my music at all, not the way I play. It’s just not in my veins, or whatever, to do that kind of stuff. But I dig sittin’ around playin’ it. Ragtime, old vaudeville sound, all that ‘20s and ‘30s stuff. The blues; it's like any other infatuation. You just get bored. I’ve just been bored with that kind of thing. It’s sort of a natural blues influence anyway. It’s always gonna be there. But I don’t necessarily always thing of it as blues or country, or whatever, when we’re doing it. I don’t really think of it as being –“ he shrugs his black leather-clad shoulders and points into space “– standard stuff.

“Your musical knowledge is the same as your regular knowledge. It’s influenced by what you’re raised with. I was raised with lots of country music. I like it. I listen to it more than I listen to rock’n’roll.

“I kind of like all that other stuff. Hokey things with pianos and clarinets. Fats Waller and all that. I just started to really like that stuff lately. It’s sort of a side thing to the blues. All the blues (musicians) of the ’20s and ‘30s divided their time between doing blues and rags, and showtunes. Things like that. Now that they’ve already reissued all of the blues quotients of these guys, they’re still puttin’ out their dumb rags and hokey vaudeville stuff. And I like that better. I’ve even started to like Leon Redbone ‘cause he tries to re-hash all of that. All those songs about the Sheik of Araby.

“Eubie Blake!” He jumps in his chair a he reads a tribute to the late composer. “He’s another one of those dorky rag players!” His fingers dance across the newspaper as he hums a few notes of one of Blake’s chestnuts. “Da-do-din-dink – “ He stops short as his eyes fall on the cover of the New York Post. “We’re doing a video right now, and we were trying to rip off most of the video ideas from Cat on a Hot Tin Roof”. And Tennessee Williams just died today! I felt like I caused it or something. I think he died because he’d seen how we butchered his ideas in the video. He killed himself over that. 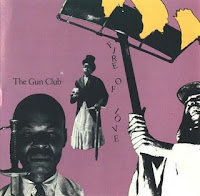 We tried to do a rock video, except that we can’t do a rock video. So we tried to do Cat on a Hot Tin Roof, with this girl in a slip and I’m drinking bourbon, and a fan going, and we’re all sweaty. Then I toss her around the room – “ he flings his arms through the air miming a violent slap, “ – Bitch!

“We were trying to combine all our favorite film adaptations of Tennessee Williams’ plays. Then he dies three days later! We haven’t even finished it yet. For the very end of it, we’re just gonna have the cover of the New York Post at the end of a chair. Maybe have a dog.

“We’re doing our famous $2000 video. We’re trying to break the world’s record for the cheapest video ever made. We went to this place called the Stardust Motel. It’s a prostitute joint. But it has this big sign in the lobby,” he stretched out his arms, his finger flashing to echo his ominous words, “’No prostitutes allowed.’ When you’re silent in the room, you can hear people, like some guy (in the next room) going,” his voice becomes a screechy whine, “’You been sleepin’ with my man? I’m gonna kill you!’ A really first-class motel. We did the whole video inside it. It’s just one song. I don’t even know what song it’s gonna be.” He shrugs his shoulders again. “One of the new songs that’s coming out in a couple of weeks. We found out that two of the songs are about the same thing, so it could be a video about either one of them. Different music, but the same subject.”

Reviews of the Gun Club’s last album, Miami, over-emphasized Jeffrey’s use of voodoo imagery and the recurring theme of death. A strange contrast to this irrepressible personality and the band’s jolting sound. “It’s just kind of a subject matter,” offers Jeffrey, as he denies any fascination with the topic. “(I’m not) obsessed with death. Not any more than Skip James or Howlin’ Wolf, or anybody.” 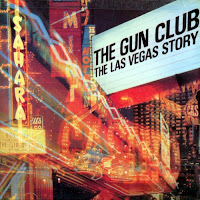 “I love musicians who kill their wives,” Jim Duckworth facetiously chimes in. “Or at least ones who say they’re gonna kill their wives. I was thinking of Spade Cooley on my way over here today. Spade Cooley’s famous quote – he was gonna kill his wife – “ his blue eyes widen and this voices becomes a baritone growl ‘ “’I’m gonna kill her!’ And he said to his daughter, ‘and you’re gonna watch!’

“Come here,” Jim says, motioning towards his guitar case. “I want to show you something.” He flips open the lid of the case to expose its burgundy velour lining and a white patch that says, “Kid C. Powers.” It seems that when Jim was on the road last fall with his previous band, the Panther Burns, he stumbled into a dressing room where “there were all sorts of holy artifacts. Lydia Lunch’s guitar and this,” he points to the white patch. “I said, ‘Look at that! Wow! Somebody’s gonna throw it away,’ so I stuck it in there. And lo and behold, it must have been resting on the strings and that must have caused me to join the Gun Club. It’s pretty amazing. It’s enforced destiny.”

Jim decided to join the Gun Club because he wanted to play “more original music.” And the Gun Club is about as original as a band can get.