Reverberating with THE STIMULATORS [1981]

This article was originally published in FFanzeen, issue #8, dated 1981. It was written by our Managing Editor, Julia Masi.

I’ve told this story before, but I’ll repeat it: the drummer of the Stimulators, a young Harley Flanagan, was the first person I ever saw slamdance among a very confused pogoing audience at a Siouxi and the Banshees show at Irving Plaza. It baffled a lot of us at first, being horizontal rather than vertical, but it was my introduction to live hardcore behavior. He was ahead of the scene. Later, he would form one of the leading hardcore bands based in New York that would influence many others, the Cro-Mags, and would publish an autobiography in 2016 titled Hard-Core: Life of My Own. The singer, Patrick Mack, died in 1983 of AIDS complications, which closed down the band. Bassist Denise Mercedes would go on to play in heavy metal cover bands. – RBF, 2019 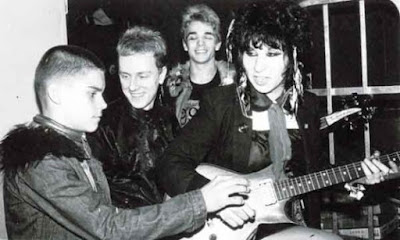 The Stimulators take their name from tiny Chinese acupuncture needles that instantly alleviate pain at the nerve endings. And like their medical metaphor, the collective talents of Denise Mercedes, guitar, Patrick Mack, vocals, Nick Marden, bass, and 14-year-old Harley Flanagan, drums, are a fast, sure, sure-fire cure for the disease of boredom.

The music is a high-decibel mix of raw, gritty rock’n’roll, like “Cradle Robber,” “Loud Fast Rules,” and reggae-style numbers. Most of the music is composed by the band’s raven-haired catalyst and spokesperson, Denise, who formed the Stimulators in 1979, after playing with Rat Scabies (of the Damned) in England. Patrick contributes some of the lyrics, Harley works out rhythms and, recently, Nick has started writing.

They have a repertoire of about 25 songs, but oddly enough, they have only two singles to their credit: “Loud Fast Rules” b/w “You Will Never Break My Heart” on the Irish label Good Vibrations that is considered a collectors item, and an American release of “Loud Fast Rules” with a flip side of “Run, Run, Run,” on their own Stimulators label that is already out of print.

They’re taking their time before they go back into the studio because, Denise says, “We are a very live band. To go into a studio, which tends to have a dull sound; or not just the right sort of equipment; or if you can’t record under the conditions you’d usually play under, it creates this whole other sound that doesn’t sound like the band. And we didn’t want to have this piece of plastic that doesn’t sound like us.”

They’re hoping to put an album out this Fall that will include some of their older material, and is what Denise sees as “the first of our albums. We’d like to do it our way, on our time. We’re not sitting around and waiting for somebody to say, ‘Oh, here’s a record deal.’ Most likely somebody would want to have a big, heavy hand in producing it and packaging it a certain way.” And their manager, Donald Murk, agrees: “If there’s gonna be any big, heavy hands on it, they’re gonna be ours.”

The forthcoming album [a live recording, Loud Fast Rules is the band’s only full album, which was released in 1982 in cassette form from ROIR – RBF, 2019] will be an attempt to put on records some of the best of their old songs, so that they can be on to new material for their sets. “People want to hear old favorites. Even with a band like ours who doesn’t have three albums, everybody wants to hear stuff off the first record. We’re a little bit being locked into playing our best stuff, just to keep it active. So, I think this album might really help in wanting to move on without wanting to give up the old stuff. You’d have to play for five hours sometimes (to play at all),” says Denise. 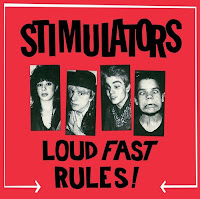 Despite their limited amount of records and radio airplay, the Stimulators are still one of the most popular bands of the New York underground, partly because of their unofficial slogan Loud Fast Rules, which has been written in every BMT subway car in the city and billboards in Staten Island by their adoring fans.

“We just wrote it as a song,” added Denise, “but it’s become an identity. In fact, people who have not even heard the band have this preconceived notion of ‘Oh, yeah, the Loud Fast Band,’ which is okay because that’s still basically what we’re doing. People really identify with it. We have people walk past us yelling, ‘Loud Fast Rules!’, and they come in wearing it on their clothes. Most bands don’t get identified by one slogan. It’s just a little thing people can hold onto very easily.”

One thing the Stimulators haven’t hooked onto easily is being labeled a “punk band.” “It would pay for us to define ourselves in one word,” concluded Denise. “It’s just the music of now. It’s 1981. We’re playing the music of 1981. It’s just a modern rock band.”