Book Review: My Life in the Ghost of Planets: The Story of a CBGB Almost-Was; by Binky Philips 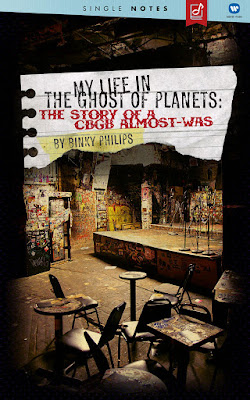 My Life in the Ghost of Planets: The Story of a CBGB Almost-Was
Written by the Binky Philips
Self-published and free HERE
45 pages, 2011

According to the author, “About 8 years ago, Rhino commissioned me to write up the history of my band, The Planets, as it was a portrait of what it was like to not make it during the CBGB era. Yes, it was 100% their idea.”

In typically Binky cynical fashion, this is how he describes his “Single Notes” book. If you’re like me, and are a fan of Philips, that would intrigue you more than put you off. Philips can be a curmudgeon about most topics (lately it’s politics, though that’s wise in this histrionic environment), but grumpy people can more interesting than placid ones. 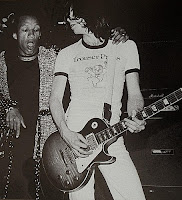 I had seen The Planets a few times over those early years, when Tally Taliafellow was voxing it up. They were a solid band, and even their covers rocked hard, no matter what genre they pulled it from. I remember once at CBGB, I was horrified to hear them break out into “Boogie Fever,” and made a face of disdain to my companion who rightfully (and strongly) pointed out to notice how they were playing it, not what they were playing. I think it was in that moment I realized that I was impressed by the group.

Binky was the face guy who ran the place at one of my fave St. Mark’s Place record shops, Sounds Records, and I would occasionally go in and talk to Binky about assorted bands, what he was up to, like that. Eventually, though, I had to stop going to Sounds because of budget, space for LPs, and the sheer amount of time I would sort their racks (I used to say, “I can’t go in because I can’t get out”). Because of that, for several years, I lost touch with Binky, but now I follow him on Facebook. I’m fascinated by his large knowledge and ownership of guitars. 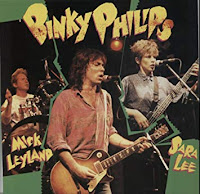 One thing I have found about Binky is that he is bluntly honest, and that comes across in the book. He easily points to mistakes made by others, such as an ex- that managed the band for a while, and doesn’t hold back errors and regrets in judgment he’s made regarding his career. As he states on the first page, “But more than not, it was my own career-myopia and/or hot ‘n’ cold ego that got in my way. Left me with a mouth full of ashes.” The story about the right choice regarding Iggy Pop and Ray Manzarek, however, is hysterical. Despite the negative tone of the title, this is sometimes an incredibly funny book, more situational than hah-hah, though.

Early on, Binky discusses his influences, which essentially follow the British path of Beatles-to-Stones-to-The Who (especially Pete Townshend). While he doesn’t tell the story about Pete throwing him his guitar at a show at the Met on July 7, 1970, you can find it eventually by searching on Binky’s FB page if you so desire (or perhaps ask him?).

One of the things about being at the advent of any scene, is that you get to meet people who some day may eclipse you in fame, but that doesn’t mean it becomes name dropping when you talk about your relationship with those future stars, such as they were. That was especially true in the pre-CBGB days and well into it (including Max’s Kansas City, Mother’s, etc.). The fact that Binky knew Johnny Thunders from going to rock shows before JT joined the New York Dolls, or Paul Stanley of KISS even before that, comes across as anecdotes rather than bragging, which is incredibly more – err – credible and organic. Plus, there are a number of great stories about them in here.

Many of the big players are here, like how Binky became a big Ramones fan, but he is not afraid to hold back on his opinions. Even though he states, “I have no intention of running a laundry lis’ of dis’ here…” in the very next two paragraphs he mentions “the inane juvenile misogyny and unfunny wisecracks constantly spewing from the mouths of self-consciously loud dimwits… exemplified by the Legs McNeil clique…”, and “Willy Deville, at least a talent I admired, was, with me at any rate, one of the most two-faced paranoid insecure people I have ever had to interact with.”

There are many times I agree with his opinions, such as Talking Heads being a better band pre-signing as a trio. As I said, this is a very brave and no-nonsense look back, and would not expect anything less from Binky, honestly. 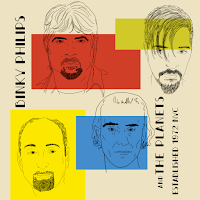 Meanwhile, Binky has had a run at a music career, and even has a spankin' new album out as Binky Philips and the Planets – because he has earned the right to name his own band that - called Established 1972 NYC. That and an earlier LP with Sara Lee and Mark Leyland are worth checking out.

Binky is quite knowledgeable on the history of electric guitars and is a collector as well, as his frequent posts portray, and I can see him doing a write-up of that as well. Plus, you just know this book is only a drop in the bucket on what he has experienced and stories to tell.

In the long run, I would love to see him expand these 45 pages into a full book, and I will happily read that, as well.

Binky Philips and the Planets in Rolling Stone Magazine
Posted by Robert Barry Francos at 12:01 AM