This article was originally published in FFanzeen, issue #14, dated 1986. It was written by the effervescent North Carolinian native Nancy Foster, now better known as Nancy Neon.
To be honest, I still am pretty unfamiliar with this Georgia-based band. They were mostly around for the period of 1981 through 1989, but have reunited on and off over the years. Often, they are compared to the scene that gave us quirky college rock bands like R.E.M., Pylon and Let’s Active. In total they produced one EP, four studio albums, nine singles, and a later live album. – RBF, 2019 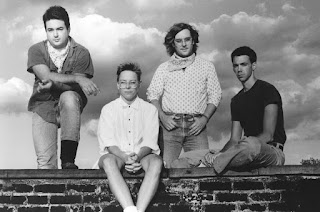 Guadalcanal Diary has been lumped in with the Athens and Southeast scene. Yet, they are really a Marietta, GA, band with diverse influences that come together to make an arresting, hybrid. Some connect them with the Byrds-like jingle/jangle magic of R.E.M., others try to pigeon-hole them with the so-called country punk of Jason and the Scorchers and Rank and File.

Yet, Guadalcanal Diary defies categorization. Just as the Athens / Atlanta / Marietta axis is a crossroads where lots of transient influences and ideas meet, so is Guadalcanal Diary a blend of several styles. Whereas some bands sound like a variety show, jumping from one genre to another, they diversify without being incoherent; they’re stylized without being static or predictable.

I love the way they put the headbangers off guard with startling versions of Cab Calloway’s “Minnie the Moocher,” a decidedly non-headbanging, esoteric version of “Johnny B. Goode,” and a scathing, sarcastic rendering of Syndicate of Sound’s “Hey Little Girl.”

It is, however, their original material that really bewilders. Murray Attaway, the lead singer / guitarist’s command post is the eye of the storm. He stands at attention in the middle of the twin cyclones of Jeff Wallis and Rhett Crowe, who whirl dervish-like on either side.

They set up a scenario that is both musically and visually thrilling. Before their show, we had been talking about how someone who had been talking about how the dBs fail to push the audience past a certain point of excitement. I was coming out against histrionics and spoon-fed hysteria. They agreed, but they said that they, themselves, did not put an emphasis on entertainment. However, the spontaneous combustion that takes place onstage ignites because of their love for, and dedication to, their music. This isn’t choreography or rock star flexing, or self-parody.

We talked about how certain acts like Billy Idol had been reduced to a set of conventional poses, i.e., the pout and the fist. What you’re seeing with Guadalcanal Diary isn’t showbiz, it’s pure joy.

The band expresses some concern that their New York City Christmas Holiday ’84 debut had not ben auspicious. Yet, it was so inspiring to see them gradually win over the Peppermint Lounge Saturday night crowd, many of whom resembled “Dance Fever” outtakes as opposed to music lovers. Despite that obstacle, they bombarded the audience with their high-quality material. Pure Pop for Now People was “Pillow Talk.” Rhett Crowe was so powerful on bass, and despite what some myopic critics say about kudzu-covered confederate bodies, she is definitely female. Her grass skirt with t-shirt, lei, and cowboy boots was the fashion statement of the year. It’s the perfect embodiment of their cross-cultural pollination. It's what you wear to a “Watusi Rodeo.”

Being in a changing environment, experiencing the class of Old World Southern values and the modernization of cities like Atlanta is part of what establishes the tension in their music. When I asked whether being from the South brought a certain romantic and mystical element to their music, Rhett agreed. Religion is a big theme with songs like “Walking in the Shadows of the Big Man” (“Big Man” meaning God) and “Why Do the Heathen Rage?” The latter is highly reminiscent of fellow Southerners from Memphis, Big Star, circa 1974 [Big Star’s singer, Alex Chilton, sang “The Letter” and “Cry Like a Baby with the Box Tops – NF, 1986].

When asked if something about the water in Athens area makes great pop with a twist, the guys confided that once the B-52s made it, “lots of bands came out of the woodwork.” They are, as I am, amazed how every band with a Rickenbacker is called “Post-R.E.M.”

Other than their home state, they also share a producer with R.E.M., Don Dixon of Chapel Hill, NC. Dixon was suggested by their rec rod company, DB. They have played dates with the Psychedelic Furs, Beat Rodeo, the Bongos, R.E.M., etc. They get some of their best reactions in Rome, GA, Louisville, KY, Richmond, VA, etc.

One of the most unusual places they played was Greensboro, NC’s Secret Garden, which had a garden in front of the stage. Back to the show: the groovy Georgia quartet gradually won over the basically stoic audience. Enlightenment is usually a gradual process. Yet when Guadalcanal Diary moved in for the kill on “Trail of Tears,” it was musical cataclysm. Murray Attaway was especially moved and moving on this one. Maybe it was my own mist, but he looked misty-eyed.

Guadalcanal Diary accomplished a lot on their second New York City gig, especially for a band on an indie label with little exposure. Rave reviews of the album, heavy airplay for “Watusi Rodeo” and a push on their video is remedying that fast!

“Watusi Rodeo” was the rave-up of the night. Their Western influences (they did Johnny Horton, George Jones, etc.) showed on this hilarious portrait of a rodeo star doing his thing on a rhino, much to the dismay of African natives. Is this an exaggerated analogy of being a hardcore Southerner in the wilds of the North? It is culture shock for both parties.

As Jeff and Rhett said, “You can be wild in New York City and have no one give you a second glance. But once they hear a Southern accent, you’re an instant curio item.”

When I said that I thought it was a healthy trend for bands like R.E.M., Let’s Active, and themselves to stay in their hometowns instead of automatically moving to New York because of the changes it could cause in their perspective and the music, Rhett said, “I couldn’t live in New York City. It gives me claustrophobia. I think Southerners are very close to the land; very territorial. Like, my father lived his whole life in Smyrna (Georgia),” and they really want to keep the influences and change out. They would build a wall, if they could.

This was intriguing me. It was all becoming clearer: the world is changing so fast and vales are changing, too. In this modern world, the Old South seems like an ancient culture. It’s solid and secure. People like the music and are intrigued with the perspective because it’s exotic – all those snake handlers and faith healers. The Southern world seems as far away from cosmopolitan New York City as Hong Kong.

Guadalcanal Diary invites you on a trip into another world full of beauty, soul and mysticism.