This interview was originally published in FFanzeen 15, dated 1988, and written by Julia Masi.

What was especially wrong with the Joneses, in my opinion, is that they were pointed in the wrong direction to make it a success. While Julia somewhat correctly lines them up with the energy of the bands from the late ‘70s, their style was more hair metal with a pop flair, and that’s the wave they should have jumped on. Their locus in Hollywood was the center of that scene, so they could easily have been lumped in with Mötley Crüe or Guns N’ Roses, but I believe their marketing was looking backwards rather than forwards.

Are their songs sexist? Yeah, but there was a lot of that kind of stuff going on back then (note that I'm not excusing any of it). Even now, I get music from metal acts that put out material with lyrics that makes me cringe. Musically, their album Keeping Up with the Joneses is really a lot of fun, but I also understand their musical immaturity worked against them more than promoting them. Also thwarting their climb, they don’t sound like they take themselves too seriously, and that may be a factor why the members of the band kept changing, other than Jeff Drake. Of course, it also doesn’t help that some time after this interview, Jeff spent a few years incarcerated thanks to trying to rob a bank. Yep, you read that right. After he got out, the band reformed, as it were (i.e., Jeff and a new back-up), and took another stab at it. Considering how many of you reading this know of them shows their level of non-success.

I met Jeff and Steve at a taping of cable access show “Videowave” (as did Julia), and yeah, they were a bunch of smartasses. The trio of videos they talk about, as far as I can tell, never came to be. Listening to their music now (see links below), I still think they are a “fun” band, but even after all these years, it’s still hard to take them seriously. And there’s the rub. – RBF, 2019
The Joneses are just average, all-American boys who “rage for fun,” party in cemeteries, write double-entendre songs and aspire to become “The Geraldo Rivera of rock’n’roll.”

Occasionally, the boys are given to clichés, but not always in a negative way. For example, their album, Keeping Up with the Joneses, on Doctor Dream Records, is a rowdy, raunchy collection of material including “She’s So Filthy,” “Look So Bad, Feel So Good,” and “Ms. 714” that fails to find anything serious in the banality of the basic boy/girl relationship.

Fun is the band’s favorite pastime and the only adjective they use to describe their music. Fans agree, but sometimes the people they love most – women – attack them for their tongue-in-cheek lyrics.

Hiding their eyes under black, opaque aviator glasses and wrapped in tight, somewhat shredded jeans, the boys – Jeff Drake (vocals) and Steve (I don’t know his last name; he didn’t’ tell me his last name, but I didn’t’ tell him mine [Steve Olson, who was also a professional skateboarder at the time – RBF, 2019]) – try to look menacing. But smiles to supresses their laughter gives them away.

Jeff is the quiet one (as compared to Steve, that is). He’s a Lakers fan given to saying things like, “A drug-free America comes first in our book!” He could easily be mistaken for a Disney World prototype of a rock’n’roll robot if he didn’t declare, “Women are my favorite sex object” whenever he’s forced to say anything profound.

Steve emerged from the womb searching for the spotlight. He works at throwing female interviewers off-track by asking personal questions. Although you can ask him anything, all of his answers related back to the topic of sex. But so does their music.

“I wanted to put a liner sheet in there,” Jeff explains as a certain reporter throws the album cover as if it were a Frisbee. “But the record company wouldn’t do it. They thought that some of the lyrics might be offensive. I don’t think any of it is offensive. The songs are actually very upbeat, so if you use a little vernacular, it’s okay.”

It seems strange that feminists take their music seriously, or even listen to it in the first place. Of course, that might relate to the title of “Look So Bad, Feel So Good,” but it seems ridiculous that they actually write to the Joneses and give them a hard time. They wrongly accuse the boys of being sexists! (Female readers, please gasp.)

“It really doesn’t bother us,” Jeff continues. “Our songs are written pretty much in the language that we speak, so there’s words in there that might be taken out of context and thought of as that. But if you’re gonna take them apart… I write them I about five minutes and it would take them more than that to pick them apart.”

The bulk of their reviews are favorable. And it did take a considerable amount of digging through clippings to find that one obscure article that labeled them “moronically misogynist.” When asked to defend themselves, they confessed they had no idea what it meant. A quick explanation rendered them speechless and pale. It seemed like a good time to call in the paramedics, until Steve interjected, “I don’t know where they got this information. I am the opposite!” (Female readers: please sigh.)

We are about to take a turn for the worse as the Joneses try to convince me that in addition to sex and romance, Chekov is among their major influences. (Come on, boys! How dumb do I look? No wonder the feminists pick on you.)

And for more sexist fun, the band can dabble in video. They have a trilogy written for “She’s So Filthy,” “Look So Bad, Feel So Good,’ and “Ms. 714” that they were trying to put together in New York at the time of (but not during) this interview.

“We’ve been doing some casting out here,” says Jeff, “getting some models up to the crib for auditions and tryouts. Since it’s “She’s So Filthy,” we want to get some really filthy girls to lend some honesty to the whole thing. It’s gonna be trashy.” And exactly how do the Joneses conduct their little star search? “We say, ‘Show us. Here’s the song. Act it out’,” explains Jeff.

“We want to make it real-to-life. Why cover it up?” asks Steve. They carry out a little repartee about making two versions, one for commercial consumption and the other a home version for limited release. 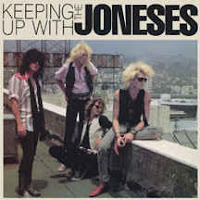 Trying to get them back to the subject of their music, at this point, is nearly impossible. And it takes the slightly drastic measure of kicking off a spiked-heel shoe in pseudo-feminist mock anger for the boys to get the point. (By the way boys, real feminists wear sensible shoes.)

Quickly changing the subject, Jeff describe the record as “a party album” and winces at comments (no matter how complementary) that it’s a throwback to the good old days of 1977-79, when live bands had raw energy. “If you can overlook the trap they got caught in, then I think they’re really great,” said Steve, referring to the chemical and financial problems that hovered like a black cloud over that scene.

“It comes from the roots of rock’n’roll,” Steve muses. His love of old rock’n’roll is so deep, he used to visit the grave of one of his heroes, Eddie Cochran so frequently that he has dozens of stories of partying on his grave.

When an analogy is made to the way Jeff sometimes mumbles his lyrics and the fact that other bands of their genre frequently condemn commercial success, Steve chides, “That’s because Jeff is afraid of success. He’s really a great singer and he tries to mix it down.” Steve, of course, is fearless in the face of fame. “When I was 17 or 16, I would go up to Hollywood and there was just a very small amount of people into this New Wave thing.

“People like X, and even people who are big now; these people were dressed up and having fun. And it was like everyone was in this little clique. There was one in San Francisco, there was one in L.A., and there was that London scene, with all the prima donnas from England that ripped off America anyway.

“I was having a great time. And I was a very successful kid at a young age. It’s ridiculous to be so narrow-minded.

“Success is what? Just being happy. It isn’t just how much money you have or – If you’re content with yourself, it depends on how you hold success in your eyes.”

As Jeff puts it, “We just want everyone to have a good time and we’ll be the conductors.”