Review: Far from Perfect: Life Inside a Global Pandemic 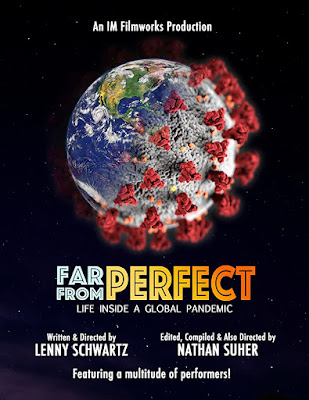 First of all, props to whomever designed the poster/logo of the Earth as the Corona Virus. Brilliant.

Even for those not directly affected by the Covid 19 virus, we are all mutually suffering through it. For some, it is being locked away and sequestered like Rapunzel, and others it’s a tantrum reaction to being told to stay inside so they bring out their misspelled placards and guns. But if you are talented and involved in the arts? It can be an opportunity to spread those butterfly wings (okay, not literally…).

The East Coast has been hit hard, and what’s a New England writer for film and theater supposed to do to take up the time? Well, if you’re Lenny Schwartz, you write a screenplay about the sitch. Plus, thanks to the Found Footage style genre, use of Skype, Snapchat, WeChat and now especially Zoom (among others), combined with a culture of selfies, artists who are used to being in front of the camera, even if it is their own, can still work from their locus. Then with Nathan Suher, you turn that into a visual work of art.

Lenny wrote a long screenplay that fits in 117 actors as characters, many from his local New England part of the world, and has them leapfrog each other; or another way to see it is as a game of Tag-team. As one quick story end, usually lasting a minute or two, it concludes with them describing someone like their neighbor, friend, spouse, parents, “essential workers,” etc., and then we meet them. It’s like a railroad apartment of actors, going from room to room sequentially.

Each has a different story, possessing its own tone, with quite the wide range. It can go from hysterically funny, to tragic, to a “yep, that’s what it’s like for me” moment for the viewer. We see people who are loving, fighting, depressed, really getting into the separation, and so forth (and scooby-doo-bee-doo).

As I indicated, the cast is mainly actors, directors, and crew of independent film and local theater troupes. For example, there’s Michael Thurber who runs the Theater Company of Rhode Island, Scorpio Releasing film director Richard Griffin, and a whole menagerie of actors like underrated Jamie Lyn Bagely (who is also a mindfulness/yoga instructor), Samantha Acampora (also a Rocky Horror Picture Show reenactor), Chad Kaplan (also an film animator), Sheri Lee (who was wonderful in the short film Doll House), and a host of so many others, all worth mentioning but… who has the time? Go look it up on IMDB. Or better still, watch the film. Anyway, as I was saying…

There are a lot of really smart moments, such as the teen girl who sells her engagement ring and goes to party on a beach in Florida, or a couple who wake up their marriage by robbing from closed stores. While some of it sounds a bit fantastical, most of it is a realistic montage of moments of pathos and joy, sadness and surprised bliss, and the occasional just plain wackiness. Some find inner peace; others find their fears.

One of the aspects of this whole event that it touches on indirectly is that people are losing their minds over two-three weeks of isolation. How do survivalists plan to – err – survive for months in seclusion in shelters? Speaking of survivalist types, despite it’s length I really would have liked to have seen more representatives of the extreme right wing (like those maroons protesting with armor that they want haircuts and to dine in restaurants – talk about White Privilege) and religious fanatics that believe Jeebus will cure all who believe. I am, however, happy how little the President, who holds much responsibility for what is going on that triggered this film, is mentioned (he would love that).

When all is said and done, even after the quarantine is lifted and life goes back to relatively normal work-eat-shit-sleep, this will remain as possibly an important time capsule of what it was like “in the time of the plague.”

From beginning of the concept to the final editing took a total of three weeks, and many characters mention being locked up for two weeks and going stir crazy. I have been home for a month now, and I gotta say as much as I would like to go out, it has not been that bad. The house is clean, I have seen some really interesting films like this one, kept in touch with friends and relations, and done quite a bit of writing. Perhaps when the second wave hits, as it is supposed to happen around the beginning of the New Year (Happy Holidays everyone…), just when we hopefully usher in a new President, we may see volume two? I am not wishing for it, just curious, as I would concerning a sequel about after the whole megillah is over and done.

There is no trailer, as of yet.