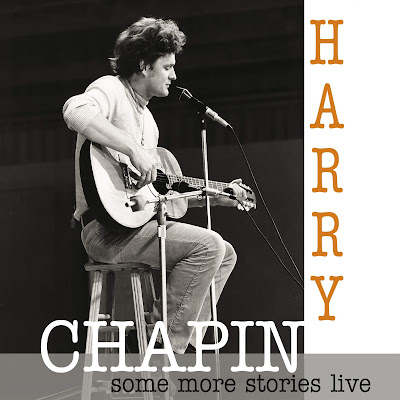 Harry Chapin meant a lot to me, starting around 1972 or ’73, when I first heard his song, “Sniper.” Most were drawn to him through “Taxi,” his first hit, but I came from a different place than most folkies (which helps explain my later transition to punk). I saw him play live a number of times, and even had the opportunity to sing with him on stage (HERE).

Around the time this new release was recorded at the Post-Aula venue for a radio station in Bremen, Germany, in 1977, Chapin’s original live album, Greatest Stories Live was already available, so this is not the “leftovers” from that concert, but a completely different show taped on another continent. There is some overlap between here and the original Stories, but Chapin is one of those singers who does every song a bit differently each time due to his non-technical voice (i.e., unique, like Dylan or Cohen). On the other hand, throughout his career, Chapin’s backing band has been pretty consistent, so you do get a group who is proficient on all the numbers. Plus, the quality of the sound is top notch.

For me, it seems “Shooting Star” is an odd opening for a show, as it is a deep and moving song that seems to come too early, before an audience has a chance to get into the emotional investment needed for Harry’s songs. It tells of a man with some kind of lack of mental agility (perhaps autism?), and the woman who loves him anyway. It’s a beautiful and touching tale.

“W.O.L.D.” was a minor hit for Chapin, and definitely one of his standard live numbers. It’s almost the opposite of “Shooting Star” as the protagonist of the song is an aging disc jockey trying to reconnect with his ex-wife (see video below). It also includes the tale of how he got to where he is today, and subtly why he is in the present situation.

The next cut is titled “Harry Chapin introducing the band,” which is also the prelude to the next number, “Blues Man.” While there is no question Chapin is head of this group, he also has always been open to giving the stage to members of his band, each of whom plays a particular part in the story, especially his bassist, Big John Wallace (who has a five octave vocal range).

Chapin’s specialty – or at least niche – is storytelling, which is not surprising considering his early career was as a film writer and editor. “Corey’s Coming” is a good example of that output, as it’s a story-within-a-story (i.e., meta-story). The song is about a young man listening to a tale told by an old railroad worker, or is it? This is the longer, live version rather than the album release, which is a bit edited (much like Simon & Garfunkel’s “The Boxer”). It’s a beautiful tune, with a lush chorus that both lulls and is dramatically romantic. And a bit sad. I love the melody, right from the opening riffs.

Off his third to last LP (also the album title) is “Dance Band on the Titanic,” an upbeat psudeo-1920s-style mixture of literal and a more metaphysical look at the situation facing the ill-fated ocean liner. Chapin combines “Nearer My God to Thee” (what the band played as the ship sank) and being a situation that feels like the listener is there.

“Mr. Tanner” is another story song with a sad tone, but is just so beautiful it could bring the listener to tears and you could feel the ache as the titular character (Wallace again singing tenor) goes for the ring, risking it all to follow a dream. The final stanza “Tanner” sings just pangs. Another standard for Chapin and crew.

Rather than just singing one of his biggest hits as the encore, he gives us “Taxi” in mid-stream, which is, what Chapin once referred to as “66 percent truth.” The original release was the first Top-40 song to play at more than 4 minutes. Again, it’s a tad sad but has an interesting back story, while also taking a glance into a possible future. Other than the song that ends this collection, “Taxi” is probably Chapin’s best known number; you might say its theme is a less ego-centric and kinder remembrance than Billy Joel’s cynical “Piano Man.”

Not all of Chapin’s songs are great, and the next one is a good example: we only hear part of “Dirty Old Man,” which as an introduction to the next, and much better song. As I said, Chapin tends to run a bit on the lengthy side, but this is the shortest (thankfully) cut on this collection at just under two minutes.

“If My Mary Were Here” truly is a stupor of a song and one of longing and reminiscence. I think it’s romantic, as the protagonist sits in his cups (not sure from liquid or smoke) aching about a lost love. It’s a soft ballad, but someone I know really does not like this because in a way, the central character is indirectly using the heartbreak to try and connect with someone else. I think of it more as being open to finding the proverbial window/door in s sad way.

“Dreams Go By” opened the original Stories live collection, but here it is buried deeper in the collection, though the opening is similar (I came to find that many of Harry’s “ad libs” were pre-planned, but I’m okay with that since it’s the songs I care about, not their introduction). This ia about how time passes and dreams “go by,” taken over by something else. It’s like the John Lennon line, “Life is what happens to you while you're busy making other plans.” But what this one posits is that rather than it being something that got in the way, it’s more that is the way is was supposed to turn out. Fun song about family and a shrug of the shoulders.

Back to story songs, the sad and dusty “Mail Order Annie,” about a farmer meeting a mail order bride for the first time as she steps off the train in the prairies of the late 19 Century. For some reason, it reminds me “Corey’s Coming,” because of the lonely tone. I loved the tune of this tune from the first time I heard it. The harmonies for the back-up band solidifies the emotion, especially on the bridge of the song.

Harry’s brother Steve comes forward with the “’round the hearth” earthiness of “Let Time Go Lightly,” a ballad of being home with kith and kin. It’s also a beautiful look at enjoying and appreciating what you have. Steve’s voice is a bit more lilting than Harry’s and it works for this one. I sing parts of this one to my partner when I’m feeling cozy in front of the fire.

“30,000 Pounds of Bananas” is also a Chapin standard, but it’s also one of the silliest of his songs (and remember, he has “Dirty Old Man”). It’s a good driving melody and gotta say it’s produced an ear worm more than once that lasted a long time. It’s a sad comedy as the C&W rhythm of it matches the bouncing of the truck carrying the said payload. Except for the tragedy involved with the singer, it could be a children’s story, as it’s a kind of twisted singalong.

The last cut is arguably Chapin’s largest hit – and one of my least favorites of his as it feels like pandering to its audience despite it’s relatively deep message, “Cat’s in the Cradle.” (much like Paul Simon’s “50 Ways to Leave Your Lover” or Melanie’s “Brand New Key”).

There is a really nice booklet added with the CD. It’s also humorous to me that Harry is wearing the same outfit on the cover as he wore on “Don Kirschner’s Rock Concert” the year before this was recorded.

And if you'll excuse a private joke between myself and my friend Dennis, "Oh, Colleen..."