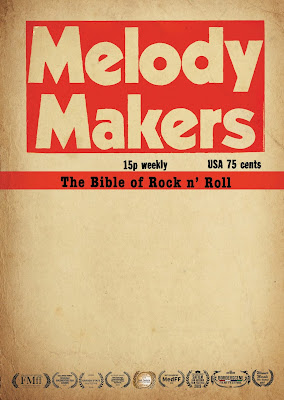 During the mid-1960s through ‘80s, if you wanted to learn about music in the States, you had to turn to mainstream magazines like Rolling Stone, which tended to be more corporate (just look at how badly they’ve mishandled the selections for the Rock and Roll Hall of Fame and Museum over the years). Sure, there was Rock Scene for the New York Dolls, the Ramones, Blondie, and the like – and I’m grateful for that – but it was only in smaller mags like Crawdaddy to cover the newest and upcoming groups. Also, those were monthly. To get info from weeklies like The Village Voice, it was just a small section of the entire issue. 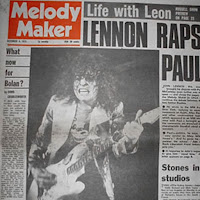 It was different across in England where there were a number of weekly papers focused mainly on music, such as Sounds, New Music Express (NME) or Melody Maker (MM). Many of us picked it up as often as we could to find out the latest and greatest of the obscure and mainstream scenes.

Melody Maker is older than rock and roll, and that’s for certain, first publishing in 1926 and lasting until 2000, when it merged into NME, essentially killing it. But, as usual, I’m jumping ahead of myself.

Essentially, until the mid-1960s, MM was a musician’s trade magazine, listing gig for various types of music (including – gasp – jazz), a place for musicians to find each other to form groups, and musical instrument for sale. This all changed with the inclusion of a cover story about some upstart band called… oh, what was it now?... The Beatles (Paul McCartney, specifically). After that, they introduced a lot of groups or solo artists that are part of the culture now, such as the Rolling Stones, Genesis, Pink Floyd, Jimi Hendrix, Led Zeppelin, and the like.

One aspect that made MM important was their respect for the musician, and especially the message that they were presenting in their music, to almost a political level. Luckily, in this well-put together documentary, we are introduced to the people who worked there in the “golden age” of the paper, namely the mid-1960s through the mid-1980s, when it began its natural decline. But more on that later.

Rather than presenting just talking heads discussing the glory days, we see the staff interviewed now, though mostly we see photographs of various bands in the 1960s and 1970s during their rise to fame and their heydays. Bowie (who is often called “BOW-ie” here, rather than “Bow-IE”), Jimi, and mostly British bands are shown in glorious black and white stills (and the occasional film footage), mostly taken by Barrie Wentzell, who really is the center piece of this film. Why? Simple: he moved to Toronto, and this is actually a Canadian film, so it had to have a certain amount of Canadian content.

Much of the staff is interviewed throughout, such as writer Christopher Welch (who worked there 1964-’79), and editors Christopher Charlesword (1970-’77), Richard Williams (1970-’80), Alan Lewis (1969-’73), and Alan Jones (1974-97). Also contributing are a bunch of musicians from the period, including Ian Anderson (Jethro Tull), Eric Burdon (Animals), Judy Dyble (Fairport Convention, etc.), Dave Cousins (The Strawbs), Chris Squire (Yes), Rick Buckler (The Jam) and a couple of members of Nazareth. There’s also a bunch of industry types including band managers and record execs, among others.

As you may have noticed, there are not many women represented here, barely even Janis or Diana Ross (Supremes era), other than Sonja Kristina of Curved Air, and photographer / founder of Rockarchive Gallery, Jill Furmanovsky, which seems odd to me considering this is by a woman director. Note that I am not pointing fingers since at the time, this was what it was like: testosterone heavy music and writing (though NME infamously had the great Caroline Coon); that being said, in my own ‘zine which ran from 1977 through ’88, I had more female writers than male. 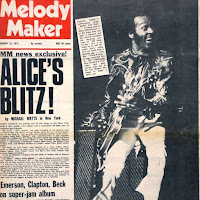 The point is that all of these accounts are firsthand. I’ve always been annoyed at documentaries that interview writers who have written books and discuss second-hand events. These people lived the moments, and have the stories to back it up. I’m also grateful that the people are often identified by subtitles, rather than just a couple of times. That makes for easier viewing and comprehending, especially when it’s been so many years and people don’t look like they did back when.

But not just stories about musicians, we hear how the internal creation of the paper worked, such as when in meetings it was discussed, “Who’s going to be the main interview of the week?” This was important because whomever was on the cover could help make the band and/or sell a lot of records. They use Genesis as the example, here. It was also amusing to hear that they would occasionally make up sensational stories to sell copies (oh, those Brits!), such as how Springsteen would supposedly open for the Strawbs, or the Beatles were planning to reform (I remember those rumors right until Lennon’s assassination). 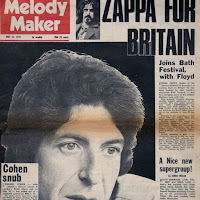 The film is loosely broken up into segments, including one I really enjoyed about interactions with musicians and their bands. For example, one of the writers talks about how he was in the recording studio with the Rolling Stones when they all found out about the death of Brian Jones, and what was their reactions. Others include tales of Jimi, Syd Barrett and Bowie.

Now I have said this before about particular local music scenes, how they would start small, blow up to become huge, and that would end up being the death knell of that very scene, drowned in its own success. That was kind of what happened to the MM. As the bands became mega-stars, and the rest of the British press started honing in on them/hounding them, the groups would close ranks and start to bar the very journalists and photographers that helped make their careers in the first place. Around that time, punk started to rise (about 1 hour into the film), and the musical taste of the MM audience began to change, leading to staff leaving (much in a mirrored way they first came in as rock’n’roll was on the rise and the old staff left in the mid-1960s in a huff).

The DVD extras are the trailer for this film, and some other music-related Cleopatra Entertainment coming attractions.

The director (and sometimes actor), Leslie Ann Coles, does a magnificent job in her first full-length feature, keeping the pace fast without quick edits, and lets us see the bands through the eyes of the people who wrote about them, and also those who snapped some pictures that have become iconic. There are also many here that have never been printed before. I’m not a fan of many of the bloated bands that are covered here (e.g., Tull, Nazareth, Zeppelin), but still found it compelling and fascinating to watch. That says a lot.