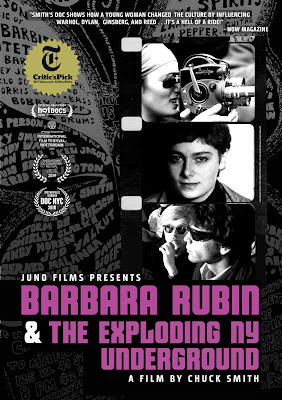 It is interesting that they used the expression “the Exploding NY Underground” for part of the title of this documentary. I know it falls under the banner of “transgressive.” In cinema, transgression would be the equivalent of Allen Ginsberg’s “Howl” compared to Frost’s “On a Snowy Evening.” It was stark, sometimes opaque, and didn’t follow narrative rules of the mainstream. Usually names like Nick Zedd and Richard Kern tend to pop up, but it was the women who were the most experimental and interesting, such as Beth B, and especially one of the pioneers, Barbara Rubin.

The title is also quite a nice play on words, considering Rubin’s associations with the Velvet Underground and Andy Warhol, who often showcased happenings he called The Exploding Plastic Inevitable. It has been told that it was, in fact, Rubin who introduced the band to the pop artist. But I’m getting ahead of myself here. 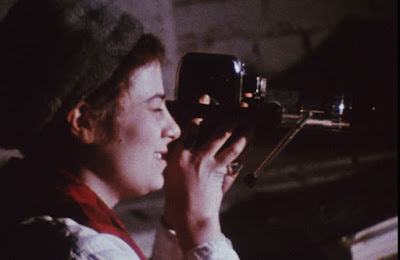 Rubin was a troubled child of the ‘50s who was an early experimenter in drug culture, winding up in the psych ward for a while. When she got out in her late teens, it was pretty obvious that she was not going to be (or possibly capable of) living a “normal” life for that time. Through some connections, she found herself as an apprentice to underground filmmaker Jonas Mekas. It was through him she saw what is now considered a transgressive grandfather of cinema, Jack Smith’s 1963 Flaming Creatures (Mekas was the cinematographer), which could almost be seen as a sexualized interpretation of Stan Brakhage’s works (e.g., Cat’s Cradle in 1959 or possibly Dog Star Man, started in 1962). With that impact, she began her own film, Christmas on Earth (1963), now considered a classic in the non-narrative genre but seen as pornographic at its time (the film focuses on explicit pan-sexual acts projected over closeups of naked vaginas).

This certainly was a door opening to the avant-garde Beat culture for her, where she befriended the likes of poet Allen Ginsberg. In return, she helped introduce him to others. While still considered a filmmaker, she possessed a new role as a matchmaker, or go-between on the scene, introducing Bob Dylan and the Velvet Underground to Andy Warhol, whose Factory scene she became not only a part of, but worked for by filming some of his infamous 5-minute “audition” reels. She also appeared in a few of Warhol’s (i.e., Paul Morrissey) films like Chelsea Girls (1966).

She was a mover and a shaker and who knows how the scene would have been less interesting or infamous without her involvement. The problem with this role though, is that some people who are at the beginning of a “scene” find themselves left behind as the movement gains momentum, turning into synergy. This was the case for Barbara, who obviously (though the film doesn’t really deeply focus on this) had some issues to work on, including the mind altering chemicals.

This part of Rubin’s life is pretty well known, and it’s fascinating to see it in more detail and hear her friends of the time talk about what it was like to not only know her and the scene, but her place in it. What I found particularly fascinating is what happened after the honeymoon phase of the Factory, when she discovered her “Jewish” identity through the Kabbalah, the mysterious mysticism end of Judaism that so fascinated/enthralls the likes of Elie Wiesel and – of all people – singer Madonna Louise Ciccone. 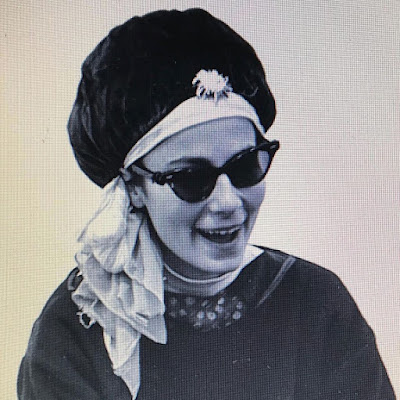 After a stint at an Upstate New York commune (I’m assuming in the Catskills) she helped found with a bunch of poets including Ginsberg, after a heartbreak, she had a strong conversion to Orthodox/Hassidic Judaism. As others do when trying to change a direction of a life that feels without purpose and filled with drugs, this is hardly a surprise in the same way people in trouble and filled with angst often come to rely on the Jesus myth.

What I find interesting is that through her entire adult life, Rubin took gender politics roads that previously were expressly open only to men, such as that particular style of filmmaking and the Kabbalah, and essentially blew the hinges off of those doors, and yet here she was subjecting herself to a life of religious servitude to religious men (as is true of all Judeo-Christian-Muslim orthodoxy).

There are only two extras on the DVD, one being the film’s trailer, and the other is a 6-minute documentary centered on Jonas Mekas called “Keep Singing: A Tribute.” Interviewed for this documentary, he passed away at age 97 in 2019.

Of course, decent music is disbursed throughout, including some cuts by Dylan and the Velvet Underground (“Heroin” is played in part twice) of course, and also notably by Melanie Safka and Lee Ranaldo, among others.

Two quick comments about what I wish would have been incorporated. First is more information about her second film, Emunah (1972; the title is translated from Hebrew as “Faith”). There are some clips from it, but unless I missed it, it is not really discussed. Also, I was kind of hoping they would have included the complete Christmas on Earth in the extras section, rather than just clips throughout (which I also appreciate).

The documentary is full of images, especially films, taken by Rubin, or have her in them. There are also tons of stills showing a life full of action and meaning, especially before it essentially passed her by on its own thing. Also, there are recordings and letters by her interspersed throughout, giving a better picture of who Rubin was, both to herself and to others, until her passing in 1980.