This interview with Cynthia Sley was originally published in FFanzeen, issue #15, dated 1988. It was conducted and written by FFanzeen Manager Editor, Julia Masi.
The Mad Orphans quickly morphed into the Lovelies, and recorded an album titled Mad Orphan in 1988. I had the opportunity to hang out with then-married Cynthia Sley (of the Bush Tetras) and Ivan Julian (previously in the Voidoids) during a taping of cable access show Videowave around the time of this interview. They are talented Art Rock musicians who deserve more recognition than they have received. Cynthia, meanwhile, has been back in a revitalized version of the Bush Tetras and Ivan continues to write a produce his and others’ music at his recording studio, NY HED. – Robert Barry Francos, 2019
“You can have so much fun with images,” sighs Cynthia Sley, as she sips champagne and bananas, and recalls the night she and her band, the Mad Orphans, played a gig dressed as priests.

It was during a period where New York City clubs were experiencing such rapid personnel changes that that whoever hired a band to play was long gone by the night of the gig, and his predecessor would go out of his way to swindle the band. “I thought it would be really great if we dressed like priests, as a real intimidating force coming in. We did really well and a lot of people came. So, I felt like I blessed the gig,” she quips.

Cynthia is a native of Cleveland, Ohio, who initially came to New York to be a fashion designer. She did work in fashion for a while. But while out in New York clubs with musicians she knew from her hometown, she was persuaded to join the band the Bush Tetras [see FFanzeen article about the Bush Tetras HERE – RBF, 2019]. They became successful very quickly and Cynthia suddenly found herself with a new career as a singer.

The way she sees it, music and fashion are closely related and often influence each other. “It’s easier to see in a place like London. You can tell by the magazines. All the magazines are being taken over by fashion. I live in the East Village [which is] like the heart of it. I see Yuppies dressing like real hipsters by night. Totally decked out! There are all these people walking around with the right clothes. They [the clothes] look great but they [the people] look so uncomfortable in their clothes. I try to figure out why they’ve got on what they’ve got on. It’s really weird. I notice it all the time.”

And she experiments with fashion all the time.

Cynthia spends hours conjuring up outrageous outfits for herself and the band to wear onstage. She admits that she tries to coordinate their outfits to the atmosphere of the club that they’re playing in, but it’s obvious that other influences, perhaps even National Geographic, work their way into her costumes. There have been nights when she has wrapped at least 20 things around her head, including a flashlight, to make a turban. “I gradually take things off and I go absolutely out of my mind. At the end of the gig when we do this Led Zeppelin song, ‘Communication Breakdown,’ I completely bug out. I start out really controlled, then I gradually freak out. If I wear something that I think is really outrageous, then it spurs me on to be really out of my mind.

“I think that’s how you have fun. I think that’s how most people do it. Maybe I’m wrong. Maybe they’re all dispassionate about it. If you’re gonna go up there and do it, you might as well go all the way. It’s like having sex.”

Musically, as well as visually, the band likes to pull out all the stops. Ivan Julian writes all of the music. Cynthia frequently contributes lyrics for new songs. The Mad Orphans’ repertoire also includes some of the songs Ivan has written with previous bands, including Shriekback and the Lovelies. 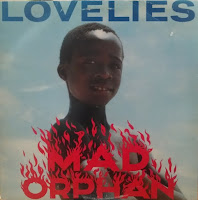 Their songs, such as “Men so Brave,” “You Don’t Know,” and “Overflow,” lean toward illustrative lyrics loaded with personal politics. They show a vibrant curiosity and sympathetic flair for people trying to find their niche or express their individuality. Musically, Cynthia sees them as “rock, but funk rock.” But most of their fans would probably prefer to simply label them a good live band.

One of the band’s primary goals is to be able to write songs comfortably for a long period of time. “It’s great when you start a band and you write these songs. But, you want to get it to a point beyond that, where you keep writing because you have this chemistry that you’re building. It’s hard to find. That’s what we’ve been working on, keeping the chemistry going.

“But you have to wait for something to happen. You have to keep yourself alive until then. I’m pretty practical. I know what it takes to get a record deal. At least Ivan and I have some kind of reputation.”

Sometimes Cynthia waxes nostalgic about the old days when she was growing up in Ohio, studying art, mostly on scholarships, and going to see bands. “I would see a band every week. My old bass player [in the Bush Tetras, Laura Kennedy; d. 2011 – RBF, 2019] and I used to go out every Thursday night, or whatever it was, to see a band. And they were great bands.”

She recalls seeing David Bowie’s Ziggy Stardust tour, the Dead Boys, the Waitresses and Pere Ubu. “I realize now that there was this huge scene there. But we were the only ones who danced. We would get dressed up – really ridiculous – put the streak in our hair or something. It was really hard to be a punk there. The music was always really great.”

Her early days in New York were also happy ones until the old club scene fizzled out. “I used to think it was gradual. Everything kind of turned towards money, especially in New York. I think it’s really money-oriented now, where it used to be experimental. But, in a way, that’s good in itself: experimental music will become lucrative now because people will really want it soon. There are so many drum machines and so much of this certain thing that’s happening. I listen to the radio very day, and most of the Top 40 all sounds the same. But there are some good things coming out. It’s a gradual change. I don’t know… things go like that… in waves.

“Like in the ‘70s, it’s really wild. There are a lot of really great things out there. I think it’s gonna be a really big turnaround over the next couple of years, where fashion won’t really have as much influence on music. Things will get more experimental. They have to. It’s more passionate.”

She sees music going further into the dance scene and hopes that the Mad Orphans “get a little wilder. I think having Ivan play guitar makes it pretty wild. It gives a difference to it. I’ve never really played with someone like him. I’ve played with great guitar players but there’s something that seems more commercial about his playing, to me.”

And, of course, with Cynthia’s artistic background, the band looks forward to working in video. “There’s so much to do with it. It’s a great thing. I want to make a low budget, really wild video, like The Mr. Bill Show. I like things that are really off the wall.”

Presently, however, the band has one pressing thing on their minds: “All we have to do is make a record.” Well, Cynthia, your fans hope you do it soon.