Book Review: SWIMMING INSIDE THE SUN, by David Zweig 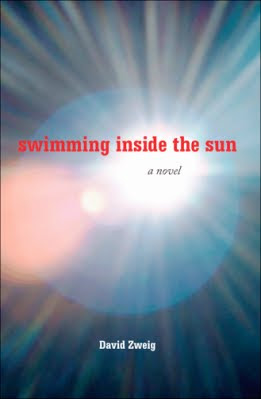 Okay, perhaps that’s a cop-out way to begin a book review, yet it feels appropriate to this novel. The first-time author of Swimming Inside the Sun is New York-based musician David Zweig, who has two strong CDs under his belt, All Now with Wings (2000) and Keep Going (2003).

The main protagonist of David’s novel, Dan Green, is also a musician, but whose life has taken a different direction than its author. Green has recorded his perhaps breaking release on a major label, only to have it snatched away by the record company on the verge of its public drop. As the novel begins, Dan is in limbo, not sure what to do next, while watching the money given to him by the company start to evaporate by merely living.

Over the next year in which the novel takes place, Dan’s world is filled with New York City’s Lower East Side scenery (many touchstone places are mentioned within the story, in a way that Bret Easton Ellis touches on materialistic culture; Dan’s awareness is as much places – if not more – than things, women who come and go in his life in varying degrees of length, and friends, many of whom are also musicians. One of the more powerful forces that has suddenly become missing in Dan’s life is a self-exile from music. With his guitar firmly stowed in a corner (or under a bed), he cannot face picking it up since his career has seemingly vanished, along with his desire to play. 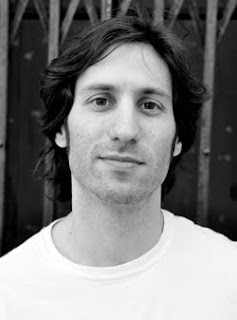 While all of this is fluttering around Dan’s life, the one quality he is slowly but surely losing touch with is the connection between his body and his mind. In a nearly out-of-body displacement, Dan views his life with a detachment that is nearly voyeuristic, and increasingly out of control.

The build-up in the novel is sure and steady, as the first-person narration starts off being linear, and then escalates toward stream of consciousness; that thought pattern becomes more erratic with a, well, mind of its own. We readers follow it step by step, as helpless as our protagonist, yet as conscious as he is of what is going on around him. His thoughts are open to us, from the emotionally detached way he treats those around him, to the minute inner fears as his life concentrically spirals inward towards a form of sane (or conscious) madness, if you will excuse my oxymoron. 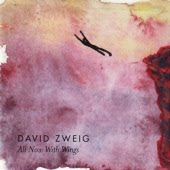 [All Now With Wings]

As Dan’s thoughts evolve and revolve around, David also plays around with the physicality of the book itself, changing fonts and text sizes to make certain points, throws in empty page for emphasis, and will talk directly to the reader. Along the way there are line graphs to explain points, and philosophical turns of Dan’s peculiarities. As we all have thoughts that, as individuals, are unique, and the reader can identify with his explanations and explorations, such as why he switches soy milk or water brands regularly.

One of the more startling turns in Dan’s life is his nearly unconscious writing on Post-It notes, which begin to overtake both his living space and his mental environment. I really enjoyed what happens with this phenomenon in the story, which is quintessential New York, but you’ll have to read as I will not reveal that sort of detail. Some of the Post-Its are recreated within the novel form, giving territory to the map of Dan’s conscious. 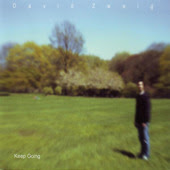 As Dan’s mind starts to take over his life, the narration begins to change, as we – the reader – are also increasingly shown his thinking as opposed to his doing. But David plays with this form, as well, and yet keeping the reader right there with him as he struggles back and forth between narration and unfolding commentary. His voice-over keeps us right there with him at all times, sometimes in a comforting way, and at others feeling as claustrophobic as is the character.

For a first novel, this is a powerful piece of work, and I must say truthfully, one of the better ones I’ve read in a long while. In a total self-disclosure, I’ve known David since his first musical release in 2000, but I must add that whether I knew him or not, I was thoroughly impressed by this book. It is a mental manifestation of Poe’s “Decent into the Maelstrom” (one of Marshall McLuhan’s favorite stories).

By use of manipulating the physical text and commentary, David uses Media Ecological systems to express his points, and even find ways to bring this to the forefront, not only mentioning Media Ecology stalwarts McLuhan and Neil Postman, but actually brings the term “Media Ecology” into play. As I am involved with the Media Ecology Association (media-ecology.org), this definitely was a “wow” moment.

Below are three questions I asked the author, in sort of a mini-interview, and his responses:

1. You mention Marshall McLuhan and Neil Postman (p. 273) and Media Ecology (p. 274) in the book. What role does this interdisciplinary academic theory have in your book, and in your life? 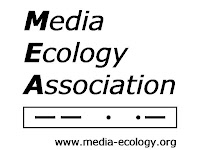 Media Ecology has been important to me for a long time. In college I took a course on politics and media, which included reading [Neil Postman’s] Amusing Ourselves to Death, and unearthed my interest in thinking critically about media and how it effects us. After college, though, is when I really began a passionate pursuit of learning and thinking about media ecology. Living in New York has been great for this for a variety of reasons, but one of the most fun was attending the Schmio Awards that Neil Postman ran for a number of years. Those ceremonies, particularly the first few, opened me up to a host of new ideas and the people who spoke eloquently about them.

The connection between alienation and self-consciousness and living in a media-saturated environment fascinates me. Because I so often view the world through a media ecology frame I began to draw related connections and explanations for a vague feeling of loneliness I'd had for some time. Fiction seemed like a really effective and interesting way for me to explore this concept. When I began formulating Swimming Inside the Sun, even before I had an outline, I knew that I wanted one of, if not the major thrust of the novel to be about self-consciousness and how media, in a very macro way, effects one's sense of self.

Daniel, the hero of the novel, suffers from a psychological disorder called depersonalization, which is the phenomenon of viewing oneself in the third-person, as if in a movie or a dream. To me, this is the most literal and extreme endpoint of a larger problem of self-awareness that I believe is becoming increasingly common due to our immersion in what is now largely, what I call, an "observational reality," rather than the "experiential reality" that has been dominant for all of history. I tried to use the craft of fiction to express this both through narrative (like Dan's struggle with an addiction to TV), and through stylistic elements (e.g. late in the book the POV changes from first-person to third-person to reflect Dan's own alienated view of himself). And, using the novel as my vehicle, I proposed a new theory called Fiction Depersonalization Syndrome that points to a media ecological explanation for his depersonalization (rather than internal explanations like trauma, anxiety, and depression that the mental health field currently points to as causes).

2. In one of your CDs, All Now With Wings, you have a photo of what I am presuming is your wall, full of Post-Its. The character in the book becomes obsessed with these Post-Its and puts them on his wall in the same way. So, did that happen to you, and how much of the character and/or events in the book resemble you and/or your own life?

You have a good eye, Robert! Dan Green's propensity for Post-It notes was definitely inspired by my own love of the little yellow squares. Connected to that, I'll just say Dan, and to a lesser degree the narrative, were inspired by my life but certainly not the same as my life.

3. On both your CDs, the bass player was listed as Daniel Green. The main character of the book is Daniel Green. Does that mean you played bass on your albums as a pseudonym, or did you just like the name of your bass player and use it for the character?

I think you're only the second person who has noticed the Daniel Green connection! Amazingly, I had been working on the manuscript for a long time using the name Dan Green before I realized, "Oh shit, but what about the Dan Green that I know in real life?" The real life Dan and I hadn't been in contact for a while when I started the book, and without thinking of him, the name just came to me for the character. Once the connection occurred to me I thought about changing it but by then the novel's Daniel Green felt so real to me that I couldn't change his name, it was him. I also wanted the name because of the fresh or naive connotations the word "green" evokes, which fit the character. Lastly, there is a play on his last name being Anglicanized by his father and changing it would have messed up that part of the book. So, to be absolutely clear - the book's Dan Green has absolutely nothing to do with the real life Dan Green.
Posted by Robert Barry Francos at 11:58 AM