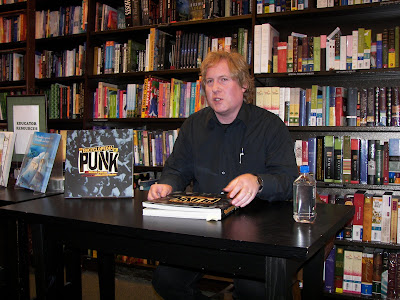 On Wednesday, November 12, I had the opportunity to see author Brian Cogan do an in-store reading from his new book, The Encyclopedia of Punk (Sterling Publishing). It was held in Brooklyn (Brian’s present turf), at the Park Slope Barnes & Noble. It goes for $24.95, and is honkin’ huge and freakin’ heavy.

This is the second reading of this book I’ve been to, the first was for an earlier version (held at Firebird Books, also in Brooklyn), then titled The Encyclopedia of Punk Music and Culture that was more geared towards academia, which was unsurprising since Brian is a Professor at Malloy College on Long Island. What was surprising was the $85 cost. And yes, I bought a copy, thanks to a gift certificate from a previous job. At that earlier reading, Brian’s band, In-Crowd performed. Oh, did I forget to mention that Brian is the drummer of this Staten Island based punk band (SIHC!) for the last couple of decades? 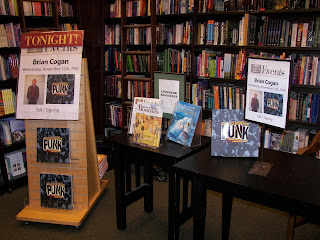 I’ve known Brian for many years, more as an academic, though. We were attending New York University together as Masters students going toward a degree in Media Ecology. I stopped when I earned my Masters degree; Brian went on to the Ph.D. Yet, even though academia brought us together, it was camaraderie about music, comics and general culture that kept us connected.

One of the first things one will notice about Brian, when one meets him, is his sense of self-depreciating humor, and this reading was no exception. The audience was filled, many being veterans on the punk scene (especially the Staten Island contingent), and including friends, bandmates, musicians, and family, such as Brian’s patient wife, (she sat behind me), Brian’s parents (who were to my right), goddaugther, and brother (who is also a musician). 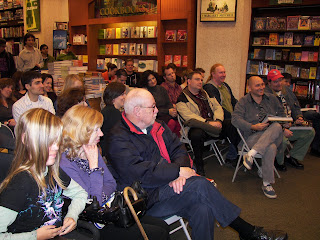 [Some of the cool people in the room]

After reading a few short passages, Brian did the right thing by just opening up the floor to questions, which resulting in some good Q&A (e.g., what makes one a sell-out?), and some comments and stories that flew back and forth both to and from the audience. If this is how Brian conducts a classroom, the students must be enjoying themselves while they learn.

Looking at the book, one cannot help but notice some similarities in the shape to another book, Punk: The Definitive Record of a Revolution, by Stephen Colesgrave & Chris Sullivan. The big difference is that Brian’s EoP is more U.S. focused, and P:TDRofAR, which has Sid on the cover, is more (and heavily) British leaning, though both blend the other countries (EOP is certainly more international). The Brit book is somewhat linear, and Brian’s book, which is much thicker, has tons more photos, and is a fun, alphabetical reference.

While I am looking forward to reading this extremely weighty book, I am sort of sorry that my photos did not make it into the second edition (six of which were in the first). Oh, well, I’m not going to let that get in the way of enjoying it. Also, Brian has made it clear that no list is comprehensive, and if he has missed anyone important, or if there are errors, he is totally open to suggestions for the next edition. Meanwhile, Brian is hard at work on his next book, an Encyclopedia of Heavy Metal. 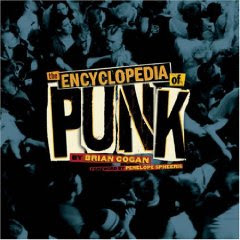 After having Brian sign a book for me, I did something very un-blank-generation-punk, I paid for the book. Full price, too. Then a bunch of us went down to a local bar, and kicked back. With apologies to Josh Highland (see the comments on my blog dated October 20, 2008), I had my first beer of the year (and probably my last), which was way overpriced at $4 for a bottle of Bud. I talked with a bunch of people including Brian and a member of the band Spanking Charlene, and after about an hour, headed home to some real and cheaper food.

I’ll see Brian again this weekend at a General Semantics Society (in partnership with the Media Ecology Association) conference held at Fordham University in Manhattan. But that’s a telling for another day. 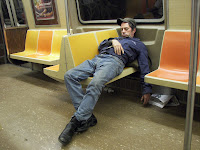 Taken on the ride home
Posted by Robert Barry Francos at 8:44 PM