What follows are two comedy digital releases. The opening bits of both comedians are linked below both reviews. 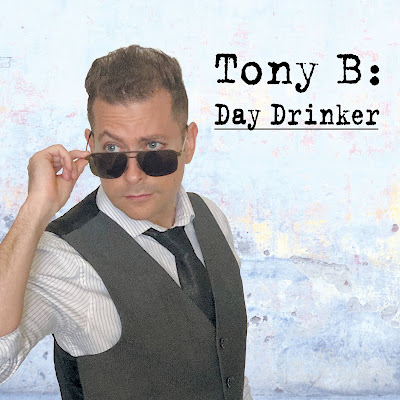 Tony B is a self-professed 38-year-old half-Italian, half-Persian. His specialty seems to be discussing bar culture and its denizens. It is not all that this release is about, but enough of it that it could have alternatively been titled just that.

Day drinking…I can’t relate. I have hung out at bars to hear live music, but even then, well, nah, which made it a bit difficult for me to identify and get those a-ha moments. As a comedian, of course, who would perform in comedy clubs across the US, Tony would be more familiar with the environs. And at least the first half of the album is about just that.

Even other topics are viewed through this lens, and some of it is actually quite accurate (from what I understand). While it doesn’t pander to that audience, it certainly acknowledges it. For example, when he talks about aging, he weighs in on choosing either food or women.

This leads to the most solid section of this half, where Tony posits the attitudes of women over 30 out with friends vs. their social media content, and wiped-out married men in the same situation. This was both funny and pithy at the same time, as he presents some personal examples that he has seen, including while telling these very jokes.

When he breaks out of the barroom for a few minutes, he talks about why he loves dogs over kids, which may make you smile. Though when he told a story that substituted the term “Mildred” over the f-word/gay slur, which he seemed to like even though it was directed at him, I understood what he meant, but wasn’t impressed.

Other topics did, however, touch the a-ha funny bone, such as discussing the infamously Trump-level University of Phoenix, and especially his piece about the attitudes of cabbies and Ubers (not that it matters, but I still use cabs; keep the money local, I say). Amusingly enough, this brings us back to the bar culture tale of Tony getting a DUI in college, a story reminiscent of Arlo Guthrie’s “Alice’s Restaurant” soliloquy.

Overall, the tone of the release is adult without being vulgar (I can’t recall a single cuss word). I did enjoy it. And appreciating the bar culture? Must be nice. 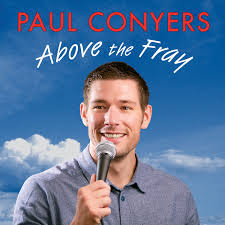 Paul Conyers
Above the Fray
Uproar Entertainment
www.uproarcomedycd.com
www.facebook.com/UproarComedy
Paul Conyers announces right off the bat that he’s 6’7” tall. Man, that’s a Joey Ramone-level of height. And this has nuthin’ ta do with nuthin’, but he was born in 1985, ten years after the first time I saw the Ramones play. A coincidence? Irrelevant, yes, I know.

Paul’s shtick (not the Biblical Paul) is to jump on PC terms and twist them around, playing with them like a cat with a toy. Be it short people (“anyone under 5’11’’, he jokes), Feminism and gender politics, woke culture, or veganism, these are just some of the topics just towards the beginning bits.

Whether you are offended by the poking or not, know that this is more jab in the ribs than lambasting, in most cases. He tends to touch on the topics rather than hounding them for any extended length of time. He doesn’t go too deep on any subject, but grazes over them like a surfer shooting the tube.

From the Bay area, Paul likes to tell a lot of stories about places, such as California and strip clubs (discussing “tits” – his word – that can-and-did break a man’s nose), but he also discusses  family, such as his sister and fiancé.

Paul relies a bit too much on non-PC language just for the shock value. He’s not like a shock-jock, but he does not hesitate to use words that have, over time, become dog whistles for the Right, and trigger words for the Left. Do I think he’s Right leaning? No, I genuinely believe he is just trying to get a laugh and a reaction. Despite that, he doesn’t rise (fall?) to the level of a Sam Kinison or Andrew Dice Clay, though there is that touch of using uncomfortable words and ideas that are meant to trigger.

What I like most about Paul is that he tells stories and describes events, and builds his jokes from those, rather than just relying on negative one-liners. I definitely got a few laughs out of this collection.