Images from the Internet
Note: there are no ads on this page, so no profit is make from use of images 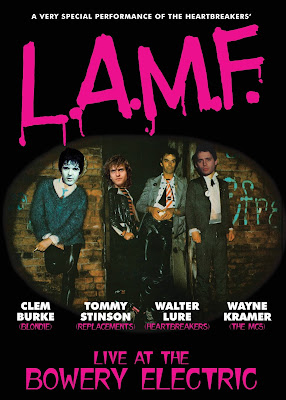 There are always raging question, such as “Who was the first punk band?”, or “What was the first punk release?” For me, a more important question is “Which is the most influential punk album?” Yeah, there are lots of them, such as The Stooges, The Velvet Underground & Nico, The Ramones, The New York Dolls, and Never Mind the Bollocks. The simple answer is… I don’t know. But I’m pretty sure near the very top of the list is the Heartbreakers’ L.A.M.F., originally released in 1977.

The Heartbreakers were Johnny Thunders (vox, guitar), Walter Lure (vox, guitar), Billy Rath (bass) and Jerry Nolan (drums). Of them, Walter is the sole survivor. He’s been playing with his own band, the Waldos, for decades now. For the 40th anniversary of L.A.M.F.’s release, he decided to play the album from beginning to end. Of course, it couldn’t be as the Heartbreakers, but he and Jesse Malin put together an all-star group and named it after the album to be played. For this gathering at the Bowery Electric during November 2016, Walter is joined by Clem Burke (drums) of Blondie, Wayne Kramer (guitar) of the MC5 and Gang War (in which he was a member with Thunders), and Tommy Stinson (guitar, vox) of the Replacements and Guns ‘N Roses. In one form or another, I have seen all of them play, including guests Cheetah Chrome (guitar, vox) of the Dead Boys and Jesse Malin (vox, guitar). The sole newbie to me is vocalist rocker Liz Colby.

The new line-up played three shows at this venue, all of which sold out, and this DVD is a compilation of the best of it. They played the album from start to finish. While I wasn’t there, I’m grateful to have the opportunity to view this. Plus, the visuals and sound are crystal clear (with the exception of a few fuzzy images here and there), unlike the muddled original pressing of the album, thanks to Nolan’s tinkering.

Let’s face it, part of the charm and importance of the Heartbreakers isn’t the band’s music al clarity. The playing is sloppy, the vocals are equally so, and the songs range from pretty silly to drugged out bashing. But it was a combination that so incredibly powerful for just those reasons. I loved to go see the Heartbreakers. When they were there, they were a force. That is sort of what I was expecting: sloppy yet stormy. And that’s just what this is, thankfully. 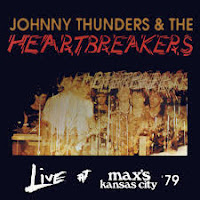 Stinson takes the lead with “Born to Lose,” which has the great lyrics, “Living in a jungle, it ain’t that hard / Living in the city it will tear out your heart.” One of the names often given to this Thunders’ masterwork is “Born Too Loose,” and Stinson plays it just that way, screaming up into his microphone in modified-Lemmy fashion. The man can’t sing to save his life – not that Johnny was a stunning vocalist, but had a discernible and unique sound that was endearing. But Stinson has the energy and heart, matched by Kramer’s excellent guitar riffs. He also covers the next song, “Baby Talk” which doesn’t quite have the chantable chorus of “Born...” Damn, I can’t help but compare it to Johnny’s (both recorded and live), and the melody of the song gets lost here in the way he raspily shouts it.

I have been a fan of Walter’s since the first time I saw the Heartbreakers. Not surprisingly, he seems really at ease with one of my fave songs off the album, “All By Myself” While I always preferred the Live at Max’s version over the L.A.M.F. one, that’s not to say it’s any less great. Here, the retired Pharmacist and Stockbroker is in fine form, even though occasionally his voice sounds a bit scratchy. Shit, I’d still go to see him play at a moment’s notice. I smiled all the way through it, and even mouthed along with the song (well, I did that with most of it, but don’t tell anyone).

For the next two numbers, D Generation’s Jesse Malin (and co-proprietor of the Bowery Electric) hops up on stage, doing well to channel Johnny in the raucous “I Wanna Be Loved,” and the ballad “It’s Not Enough.” Jesse is vocally sloppy in a similar way to Johnny, so it’s a great fit.

For the first time at this point in the DVD, it’s easy to spot that there is a visual melding all three shows together as he dressed differently for each of the three shows, even though the sound is continuous from one of them. The cut-and-pasted images would be continued throughout the show.

While DeeDee Ramone wrote the song, and the Ramones also sang it, it was the Heartbreakers that first brought “Chinese Rocks” to the studio, and it’s rare to hear me say it, the Heartbreakers did it better. Again, I’m a fan of the Live at Max’s take, in which Walter adjusts the lyrics (i.e., making it not radio-friendly), and 40 years later, with Walter and Tommy at the vocal forefront, it still kicks ass. For this number, Kramer plugs in Thunders’ actual guitar. I’d like to add that Burke does well matching Jerry Nolan’s stand-out drumming on the song.

“Get Off the Phone” is another Walter classic, and I use that word sincerely. Walter handles it with aplomb – as always – again getting everyone to sing along. More than Thunders, Lure usually wrote songs whose choruses are more enjoyable to sing along with – said with no disrespect to Thunders’ who wrote some great numbers as well, of course.

Malin is thankfully back doing his best Thunders with “Pirate Love,” bringing up Cheetah Chrome to join in. Chrome is an excellent guitarist – always has been – and I’m glad as time has gone by, more people recognize it (and while you’re at it, check out his excellent autobiography, Cheetah Chrome: A Dead Boys’ Tale, but I digress…).

“One Track Mind” originally was a Walter Lure/Richard Hell composition, beginning its life as “Love Comes in Spurts.” After Hell – err – left the Heartbreakers, Walter changed the song around a bit and came up with another strong piece that was one of the Heartbreakers’ tunes on heavy rotation in the old Max’s Kansas City days. It definitely holds up (as does “Love Comes…” but I guess this isn’t the time or the place for that). And yes, I sang along. Kramer takes on Thunders’ guitar break, with Walter taking over at the end. This shows something important about what made the Heartbreakers so special. Kramer is a stunning guitarist, but he is quite clinical, without Johnny’s sloppiness. Walter is as loose as ever, and the contrast here puts firmly why Walter and Johnny were so great together as they complemented each other. Here, the sharpness of Kramer and the looseness of Walter sounds a bit strange. Wonderful, but strange.

I miss Johnny singing with Joy Ryder (d. 2015); usually they did “Great Big Kiss.” I bring this up because Liz Colby brings a dose of feminine rock to Johnny’s “I Love You,” a solid song that blasts, and she is up for the task, giving it an occasionally smoky, bluesy texture. She also made me think, “Wow, Johnny never jumped around the stage as much as she does”; then again, he usually couldn’t. He was more of a stage roamer with his tongue often doing the most movement.
Cheetah comes back on both guitar and vocals knee deep with “Goin’ Steady.” While it is not as rough as Stinton’s, Chrome’s gritty voice matches the sound and the mood of the song, doing the Heartbreakers proud. Same can be said about Kramer, who takes the lead for “Let Go,” a powerhouse of a number. The rave up has a great chorus, especially when the band sings along.

Appropriately, Burke sings “Can’t Keep My Eyes on You,” which was a contribution to the album by drummer Nolan. Of course the song is about fashion, as that was one of Nolan’s (many) specialities. Burke’s vocals are a bit rough around the edges, buy hey, so was Nolan’s. Still a great song, though, and it gets the respect it deserves. Same with Kramer taking on the Thunders cover of The Contours’ “Do You Love Me,” which is a high-energy song to end the set.

For the extras, there is a 3:08 minute interview with Clem Burke about how he came to be included, and his fandom of the Heartbreakers, especially Jerry Nolan. Next up is 3:29 of Jesse Malin who also discusses his love of the Heartbreakers and Walter in particular. For 3:10, Stinson fuckin’ talks about how fuckin’ important the fuckin’ record is and how fuckin’ drugs fuckin’ influenced it. In other words, he doesn’t really say that fuckin’ much that the whole fuckin’ world doesn’t already fuckin’ know. Walter’s bit is 4:41, and he discusses the place of the Heartbreakers in the local musical spectrum of its time, and his relationships with other Heartbreaker members. Last up is Wayne Kramer at a full 7:04, who waxes poetic on how Beethoven, Charlie Parker, rappers, etc., were punks, and how ignorant he was about the Heartbreakers’ music, even though he knew some of the songs as he was in a band with Thunders and played some of them live before.

I’m amazed at how young so much of the audience is in these three sold-out shows, and yet they’re singing along. That shows the power and influence of the Heartbreakers. My only annoyance – and this shows my age more than anything else, is how much of the view is blocked by people taping the show on their cellphones. Either get the pro cameras higher (if that’s possible or even realistic), or have a no taping policy. Yeah, I’m a curmudgeon about this, because I want to see the musicians through the lens of either my own eyes or the camerapeople, not the blue glow of the cells.

Now if I had a choice between seeing the capture of this reunion show or something like Scorsese’s The Last Waltz, about the last show of the Band, there is no question in my mind that I would plug in this. The odds are better of my not falling asleep with Uncle Walter and Co. I care more about being told to get off the phone than finding out about the night they driving old Dixie down. Hands down. Now how about a Rent Party show, Walter?

Bonus video (not included on this one):