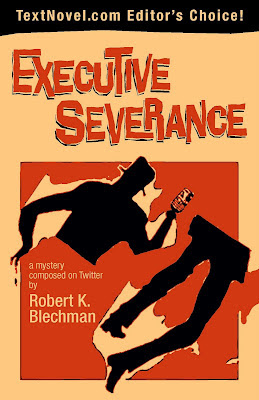 When one is known in the academic field as both a “model" and "modern” Media Ecologist* it is hardly surprising that he would use a New Media as the primary source of his novel. In this case, the message is mediated through Twitter.

For 15 months, Blechman wrote two Tweets a day and eventually put them together to form a mystery novel; in this case the conglomeration is called by the new genre of Twitstery (i.e., Twitter Mystery). Each paragraph is less than 140 characters, and about three lines long.

But let’s back up to the old technology first: along with romance, spy, and horror / sci-fi (or is it called sy-fy now?), mystery novels are certainly among the most prolific, with many authors having dozens of titles to their names. However, among this grouping, only mystery has a substantial comedy sub-genre, with the likes of those by Kinky Friedman, or the Monk series (not as good as the cable series, by far, but I digress…).
﻿
﻿
Those of us who know Blechman (or Bob, to his friends) are aware of his fondness for humor, especially puns. Conversations and emails are bound to bring smiles and an occasional good-natured groan from the recipient. Thankfully, he lets his muse run wild, and goes full steam in his story of a smarter-to-be-lucky-than-it’s-lucky-to-be-smart loner, noir-ish police detective, Arkaby (apparently, his first name is unpronounceable).

It certainly is a silly story, of a murder(s?) in which a character is cut in half mid-Tweet before the narrative even starts. Called to investigate, Arkaby uses various forms of technology (such as using a gun app on his cell phone, rather than a real one) to get to the bottom of the – er – body division.

In this case, he’ll meet the victim’s daughter, Regi, and various brothers (all named after the alphabet. Yes, literally, the first sibling is A, the next B, and so forth), along with a number of other assorted and sordid characters.

And, oh, those witty puns that are throughout. An example would be Arkaby going into one of the twin buildings named after Frank Lloyd Wright, and finding out he’s in the left Wright tower, rather than the right Wright one.

One of the paragraphs that actually had me laughing (and there were quite a few) is when Arkaby interviews the murder victim’s previous spouse: “[Willum] Granger’s second wife was a beekeeper. ‘I still go by my ex-husband’s name,’ she said shaking my hand. ‘You can call me Willum.’”

But please, and this is important, while this book is extremely silly, as a certain Monty Python Sergeant-Major might say, do not assume that it is dumb. Hardly.

Bob’s use of media constructions and theorists abound throughout. Sure, you don’t really need to know any of that to enjoy the story, but it’s an added bonus, such as a viewer can easily enjoy The Simpsons without getting all the references. A perfect case in point is on page 90, where the detective, deducing about the palindrome-obsessed dead man to his daughter, “I think you are the living message Granger sent to a time he would not see.” A couple of paragraphs later, he states “You don’t need a postman to know which way your kin goes.”

Of course, the latter reference is to Dylan’s “Subterranean Homesick Blues,” but it is also a nod to Neil Postman, who famously said “Children are the living messages we send to a time we will not see,” in his book, The Disappearance of Childhood (1982). It could also be noted that Blechman also achieved his doctorate in Media Ecology under Postman at New York University.

The book is a fast read, short and sweet, but it is worth the experience. If the reader is not laughing or wincing at the pun, or noting a particular reference, you are certainly enjoying the easy flow of the novel. 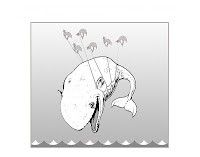 Throughout the book, there are a number of illustrations that are perfectly suited for the theme, done by crack cartoonist David Arshawsky. Even here, there are subtle hints of influence, with drawings of a young McLuhan (e.g., page 125), or a reimagining of the Twitter “fail whale.”

So, if you are into mystery stories, puns, humor, Media Ecology, communications theory, or just a relaxing reading at the beach or on the john, this may be a perfect way to spend some time away from texting.


* A multi-disciplinary field focused on the interconnections of media, technology, symbols and culture, and based on the works, in part, of Marshall McLuhan, Neil Postman, Walter Ong and Jacque Ellul).
Posted by Robert Barry Francos at 1:03 PM