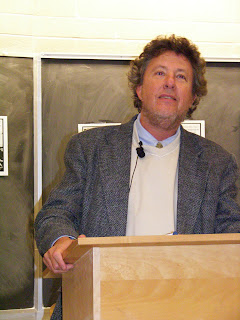 Earlier in the week, I was told about a coming evening lecture at the university, which was to feature historical theologian Marc H. Ellis discussing Israel.

On November 19, 2009, in the afternoon of the presentation, while I was on the phone with my good pal, Alan Abramowitz (who is historically knowledgeable about Israel and its neighbors), I looked up Ellis on the Internet. There I saw that he has numerous books and articles about the Holocaust, Israel, and Christians (he teaches at Baylor in Waco, TX, a heart of Born Again fundamentalism), but mostly it was pretty clear that he was an apologist for Israel, and in favor of a two-state solution. At that point I knew that (a) he would be interesting, (b) I would disagree with him, and (c) I would need to keep my temper wholly in check. 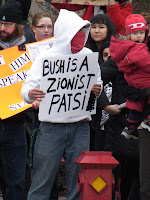 This is not exactly a town full of Jews (there are two synagogues for a population of 250,000), and during a march against George Bush recently, there was someone with a scarf covering his face carrying a sign which read, “Bush is a Zionist Patsi” [sic]. The overfull room reflected many more of Muslim faith than of Jews, and I certainly knew which side they were on. That is the problem with the Middle East, as it is hard to be centralist; it’s usually either “them or us,” depending on your stance.

Let me start out by stating clearly, Marc Ellis is an excellent speaker. Scheduled to go on for 45 minutes to be followed by 30 minutes of questions, he talked for well over an hour and was never boring, was often charming and humorous, and especially self-deprecating in a culturally European Jewish way. He is someone you would meet at a dinner party and probably enjoy spending time with. In mild mocking tones, he said that traveling around the world was difficult with Bush Jr. being president, but now it’s easier with Obama (he admits he loves Obama, but doesn’t believe he will do anything to solve the Middle East issues), especially in Canada with the prime minster, Stephen Harper, being “right of Bush.”

Ellis started by positing that he is proud to be a Jew, but does not like how Israel is (re)acting. He brought up what he called the “prophetic,” meaning that it was Jewish culture, specifically the Exodus story with Moses bringing down the commandments, which is the basis of the entire Jewish-Christian-Muslim culture. As he spoke, a PowerPoint presentation flashed overhead, initially including the covers of some of his tomes, which seemed a bit disingenuous to me (but I feel that way about any author who lectures and pushes more than the present book, Judaism Does Not Equal Israel: The Rebirth of the Jewish Prophetic).

His essential argument is that the Jews of Europe, who migrated to the Middle East after World War II, basically used the Holocaust as a tool and justification for taking over the land, and treated its inhabitants poorly. Ellis used images of the walls built in Israel and especially the West Bank, and compared them to the walls built around the Warsaw Ghetto. What he left out mostly was why both these walls were built, and the difference between the motivations. The Warsaw wall was built to keep the Jews in for extermination purposes, whereas the walls in the West Bank are to keep the threat of violence to the Israeli citizens out. Ellis referred to “a few crude missiles” lobbed over to Israel so the wall is an overreaction, but in fact it is thousands of missiles every month that fly into Israel. As I’ve stated before, if Hamilton, Ontario, started lobbing bombs into Buffalo, NY, within a week the US would be attacking and sealing off Hamilton. Meanwhile, Israel is told by everyone else to just say, “Oh, well.”

He also discussed the “Nakba” (Arabic word for catastrophe) which is the “Palestinian” word for their being kicked out of Israel at its formation in 1948 by the Israeli Defense Force (IDF). This is a misnomer, however, and what Ellis did not address at all that “Nakba” is a word created as a tool for something that pretty much never happened on a large scale. What actually occurred was when Israel was formed, the leaders of the neighboring Arab states declared that if any Arabs stayed in the territory after Israel was created, then when the neighboring Arabs destroyed “the Zionist entity,” then they would be tortured and killed as collaborators, so most Arabs left their homes of out fear from other Arab states. When these “refugees” moved out and to what was to be safe havens in their threatening neighbors, they were ostracized and placed instead into miserable ghettos and mistreated worse than anything done by the Israelis. No one has been crueler to the “Palestinians” than their own brother states. This is never addressed by apologists. 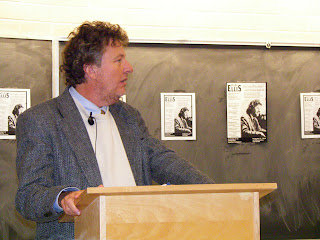 Ellis declares that he is in favor of a “two-state” system, with the West Bank and a large part of Jerusalem becoming a home-land for the “Palestinians.” However, what he does not mention is that when the British left Palestine, the UN split Palestine into two parts, a tiny percentage to the west went to become Israel, and the rest became an Arab State of Palestine, which became annexed by Jordan shortly later. But when the Arab people who were living in the territory to become Israel were forced to leave by other Arab states under threat of death and thereby losing their land that way, that is what became known as Nakba.

As for Jerusalem being bi-owned, this will not solve the problem of the Wailing Wall and the adjacent building, a holy Muslim site. After the Six Day War in 1968, as is stated in Wikipedia, “Jews could visit the Old City of Jerusalem and pray at the Western Wall to which they had been denied access by the Jordanians (in contravention of the 1949 Armistice agreement). In Hebron, Jews gained access to the Cave of the Patriarchs (the second most holy site in Judaism) for the first time since the 14th Century (previously Jews were only allowed to pray at the entrance).[67] A third Jewish holy site, Rachel's Tomb, in Bethlehem, also became accessible.” Since the Israeli’s took over Jerusalem, all can come to the holy sites, with the only restrictions being that a visitor must go through a check point similar to going to, say, the Statue of Liberty or the Arch of St. Louis.

Ellis claims he is glad Israel exists, but is also in favor of arming the “Palestinians” so they can fight for themselves. Che? He states that there is a “second Diaspora,” where 2 million Jewish Israelis have fled, he claims out of guilt of how the “Palestinians” are treated. That may be accurate for some, and in fact I’m sure it is, but for most Israelis in New York I have known it was for two basic reasons: first, they can make money here (like most immigrants from anywhere), and they are tired of living in fear of daily threats and bombings.

The largest question I had about what he did not talk about was why Israel has its policies, such as building walls. But he went around that by stating his talk is about Israel, “not about the Palestinians.” So he is only talking one sided, which is hardly impartial.

What would I like? I’d like to see the Arabs recognize Israel and declare (and follow through) that they will stop attacking. If that happened, I bet within a couple of years trade between all parties would start and both would benefit, then the walls would come down, and a second Palestinian statehood would probably emerge. Most of the world just wants Israel to give and give, and not get anything, especially safety, in return. While I certainly do not necessarily agree with all of Israel’s policies about the “Palestinians,” on the other hand I understand the reaction to them. Sure it is sometimes harsh, but it is a country that was built by the survivors of the Holocaust, was attacked by all its neighbors within 24 hours of its creation, and is still under constant threats (too often one hears some Middle East head of state claim that they want to eliminate Israel).

On the part of Israel, and here is the part I actually agree with Ellis, I can imagine it becoming a secular state rather than a “Jewish State,” where everyone was equal, but be put into the charter that is especially safe for Jews and aboriginal Arabs. Theocracy as rule just does not work, as is evident in many countries in the Middle East, such as Iran and Saudi Arabia. That’s why the US has a separation of church and state (though there are those in the US who would both argue against the separation, and believe it should be a “Christian State,” and others that fight for it, such as the much-bashed ACLU). 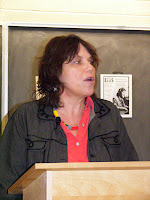 At the beginning of the Question and Answer period, the moderator (who is a Jewish professor from another university), clearly stated she would take charge and there would be no statements allowed, only questions, and they must be respectful. In other words, one must agree. Ellis denigrated Bush, but seems to follow his questioning policies. All the questions I heard (I left after about 30 minutes of this section) clearly showed that most of the audience was behind Ellis, though one woman asked why he showed slides of walls but not of the blown up and burned bodies of babies from the suicide bombers, to which he dodged the answer to a query that I found very relevant.

The important thing to remember is that truth is like the word “objective,” as it doesn’t truly exist in a pure form. There is always bias, as Harold Innis pointed out. My truth is not necessarily “your” truth. Language philosopher Alfred Korzypski declared his Law of Non-Identification as, "Whatever I say a thing is, it is not."

A very similar lecture, given five days earlier, in Toronto:

Posted by Robert Barry Francos at 11:49 AM