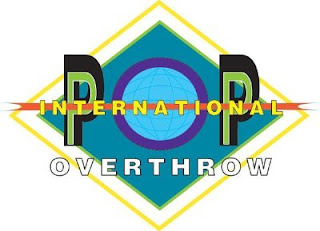 I’ve known Gary Pig Gold since the late 1970s, when he used to write for my magazine, FFanzeen, while publishing his own fanzine at the same time, the Pig Paper; I saw him play in his country roots inspired band, The Ghost Rockets. Shane Faubert I met in the early ‘80s when he fronted the band the Cheepskates, all of us hanging out playing pool in the bar attached to Irving Plaza, while the Super Bowl played on the television on the wall. Dave Rave, I met in the mid-‘80s, when he first came to New York, but he’d been in my magazine in an article written for me by Hamilton (The Hammer), Ontario, music historian Bruce “Mole” Mowat. In various modes, I’ve seen him play as lead in Teenage Head, projects with Lauren Agnelli, and recent solo projects. Yes, I’ve seen this trio of pals all perform individually, but never together. That changed on the opening night at the International Pop Overthrow (IPO) Festival (www.internationalpopoverthrow.com/), the New York branch held at the Baggot Inn on W3 Street in New York.

But I jump ahead of myself here.

The Baggot Inn (www.thebaggotinn.com) is a very cozy place with a bar in the back, and then a lower area towards the back with tables and a low stage (either that, or the band may have to crouch). Through various incarnations, the bar has been there for about 100 years. I’d been there twice before, once for a Dawn Eden birthday party, and once to see Contraband (based around the Bowler brothers, David & Howard).

This opening night, a number of bands played, and THAT is what I’m here to talk about, actually. 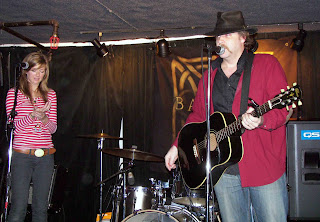 Thanks to our “lovely” MTA transit system, by the time I showed up – and I was only traveling from Midtown, mind you – I had missed most of the first set by THE VOYCES. From what I heard, I was sorry I didn’t get to hear more. Singers Brian Wurschum and Jude Kastle have a lush sound and harmonize quite velvety on their ballads-based style. What makes them even more enjoyable is that the songs aren’t mopey, but actually have an edge to their sweetness. But after three songs, there was Mr. IPO (aka the very nice David Bash) to thank them and introduce the next band.
* www.thevoyces.net/ 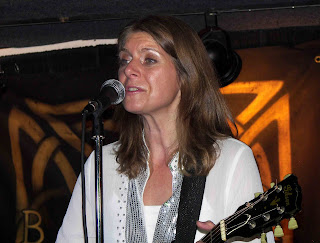 Next up, in a solo fashion, was singer-songwriter and rocker, BIBI FARBER. She has worked with Richard Lloyd (Television) a number of times, and he produced her first CD. She is tall, stately, and willowy, with an expressive demeanor and a self-demeaning character that was charming rather than cloying, she explained how her voice was going, but she was going to try her best. Actually, it kept her performance to an amiable low key that enhance the songs in a sultry way, and her guitar work (on a guitar borrowed from The Voyces, thanks to technical problems) showed there was a second texture there. Her song topics included someone talking too much, and a brief love during an affair. I’m interested in hearing her CD with a full on performance. Meanwhile, this evening she was quite satisfying. After she finished, she sat down next to me at the communal table (similar to the late Max’s KC and the Bottom Line). After a few more performances, she left, leaving behind her pick, which I took with me. If anyone is interested, it’s a Fender Medium.
* www.bibifarber.com/ 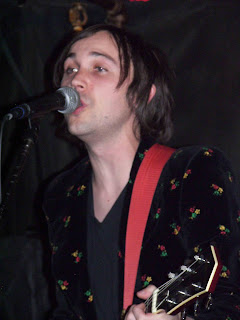 I’ll come right out and say it now, and get it over with… The singer of the eponymous JESSE BRYSON is the son of Wally, of the Raspberries. Jesse was also in Qwasi Qwa and Rosavelt. Okay, now that we got that out of the way, Jesse’s moved from Cleveland to Brooklyn, and now he’s using his genes to further the pop rock sound, bringing it up to date, while mixing other sounds, including Mersey and a touch of country. With his Shemp hair flying, he bounces around while he plays in front of the group, with good hooks and melodies, and strong vocals. I could certainly appreciate what they were doing.
* www.myspace.com/thebrysongroup 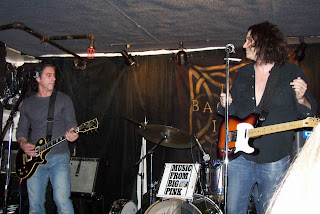 The night was about to rev up a few notches with JAKE STIGERS AND THE VELVET ROOTS. At the forefront of the band is guitarist/producer Nunzio Signore, and singer/guitarist Jake Stigers. It’s pretty obvious from the way they play and interact that they are tight enough to enjoy what they’re doing without worrying about the other. Jake has a very large personality that makes his a showman in the best of ways. Whether it’s the banter betwixt tunes or the hair flailing during the more upbeat numbers, he keeps the stage presence. I can see this band going onward and upward. Sound-wise, they remind me of T-Rex, with that rolling guitar, sharp melody, and assessable and hook-laden sound. After the set, Jake gave me his latest CD, “I Do No Want What I Haven’t Got”, which I will be reviewing at another time, but I will say it’s worth seeking out. Meanwhile, according to their own list, here is their set:
1. Miss Reality
2. End World
3. Girl
4. Love is Spoken
5. Do Not Want
* http://www.jakestigers.com/ 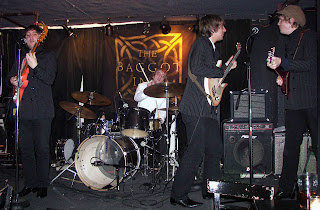 Another highlight of the evening was THE DUKES JETTY, who came all the way from Rugby, Midlands, UK. David Bash explained they played at the UK version of the IPO, and were so well received they were invited over. And they came, just for this gig, amazingly enough. Welcome, guys. The five fellas who make up this band are solid post-Mersey Beat. Even their clothes could have been Twiggy era Carnaby Street. The Dukes Jetty sound could easily fit besides the Searches, the Chad & Jeremy, the Zombies (sans organ), and the like. There are lots of lush harmonies, perky melodies, and strong musicianship and songwriting. All string players sing, with the other two sharing mics, very Paul and George. They’re young, and they’re in touch with the ‘60s.
* www.myspace.com/dukesjetty 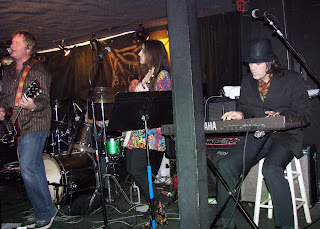 Hailing from California, cult idol Phil Rosenthal brought most of his band, TWENTY CENT CRUSH. The exception was the wonderful Nancy Heyman on bass (when she was still Nancy Street in the ‘70s, she was a member of pre-grrrl rockers Cheap Perfume. This time I’ve seen her perform since 1977. Also hanging around, but not playing, was her husband, Richard X. Heyman (another cult legend). I’m not familiar with TCC’s material, but was happy to bop my head to their mildly quirky melody lines and lyrics. Phil’s voice sounded a little rough, but hey, that’s what cult legendry is usually about. And as a person with little practice time, Nancy kept right up. About two-thirds through their set, they brought up a guest, ex-Rooks’ Michael Mazzarella. Dressed in black, with a black pork-pie-ish hat, he sat down at a keyboard and joined right in, also keeping up. He played for a couple of songs. After the set, I had the chance to get momentarily reacquainted with Nancy, who remembered me.
* www.myspace.com/twentycentcrush 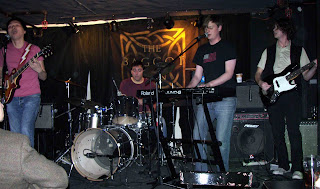 A young band, THE ATTORNEYS have a pretty large and growing following. While, they were the least enjoyable band this evening for me, I could also tell that it was much more my taste than it was their talent. Their style is very ‘80s, being keyboards focused, and just reminds me of bands like Duran Duran and A Flock of Seagulls. Vocalist and said keyboardist William Ryan George has a very sweet voice a la Boy George and a cross-face Peter Zaremba-style hairstyle; he emoted constantly, moping over the keys, throwing his shoulders as in sorrow, and at some point, he put on goggles. Okay… Again, the whole band is talented, just not my cup of wax (he said, mixing metaphors). I do have to say, though, that their drummer, Ken Weisbach, was amazing.
* www.theattorneysband.com/ 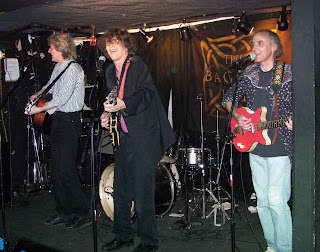 Last up was the band I was waiting for, THE NEXT BIG RAVE. The aforementioned Dave Rave, Shane Faubert, and Gary Pig Gold hit the stage, with Gary’s wife Doreen watching from room center. From left to right, Gary was on a plugged in acoustic guitar, Dave’s was a hollow body electric, and Shane was on a solid body. Just three guitars. And when they started, what a treat. They did songs across all their careers, including one of my favorites of Dave’s “When Patti Rocks”, and a slowed down and thoroughly enjoyable version of Shane’s “Run Better Run”. His voice is as smooth as ever. While this is the first time I have seen Dave play without Lauren Agnelli joining in (it was Thursday, literally a school night, as Lauren is a schoolteacher these days), this all boys night rocked just like Patti. It was a very loose ensemble of songs, which seemed to be mostly picked on the spot and covered all periods of their careers. And because these guys have known each other for so long, they all were able to play anything of any of their songs that came up. 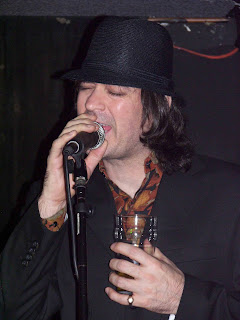 Again, MICHAEL MAZZARELLA came up, drink in hand, this time to sing a couple of his own numbers. Also joining at the end were first drummer Chris Mehos (who was in the Ghost Rockets with Gary), and then Chris Peck (formerly of Oral Groove and (Joe) Mannix). It was easy for the audience to be having fun watching, because it was pretty obvious the musicians on stage were having a blast.
* www.dave-rave.com
* www.garypiggold.com
* tinyurl.com/34rnyv
* tomlou.com/nextbigthing.html
* www.earcandymag.com/michaelmazzarella-2005.htm

After the set, I stayed and said my hellos to Gary and Dave, though I somehow lost track of Shane, with whom I was hoping to get reacquainted. Eventually, I headed to the subway, where, of course, I just missed my train, which led to a 20-minute wait, resulting in a nice 4-hour sleep workday. Well damn worth it, too.