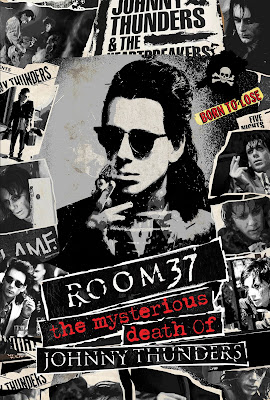 When the trailer for this film dropped earlier this year, many Johnny Thunders/The New York Dolls/The Heartbreakers (etc.) fans lost their minds in the loosey-goosey way Thunders was portrayed. Yes, from the trailer. I’m also a fan of Thunders (d. 1991), and saw him play dozens of times.

But here’s the thing about biographic films: they’re nearly all filled with bullshit and inaccuracies. People and events are either omitted or combined, stuff is made up and changed for “dramatic purposes” and so there are going to be those who will see a biopic and cry foul, and others will just enjoy wherever the story leads as long as the soundtrack blasts it just right. Just look at the reactions to these three films released recently: The Dirt (2019; about Motley Crüe), Bohemian Rhapsody (2018; Queen/Freddie Mercury) and Rocketman (2019; Elton John). Love it or hate it, the accuracy level is pretty low or, more precisely, over the top.

But there is another level of biopic which is for all practical purposes a separate category, and that’s the flight of fancy. This is easily seen in films like Sid and Nancy (1986; Vicious and Spungen) and especially Velvet Goldmine (1998; David Bowie and Iggy Pop). Here, we take a real person or situation and then take it to the metaphysical fiction. This is where I would place Room 37. It’s not really a biopic about Johnny Thunders (JT), it’s what they call in comic book land, a “what if” story. This is also the way it should have been promoted, in my opinion.

Another issue is the overlapping of the real. What I mean by that is while this is a largely fictionalized version of JT, when he gets a phone call from his ex-New York Dolls co-guitarist, Sylvain Sylvain, the voice – easily recognizable – is definitely Sylvain’s. And the music video that accompanies the film, “Crazy Kids,” is by Walter Lure, JT’s co-guitarist in the Heartbreakers, indicating there is some lukewarm credibility.

So, with that in mind, note that I will be reviewing this as a fantasy, not as a biopic (though with some overlap, of course, as Thunders was a real person, and so was some of his situations presented here). If you want the real deal about the man, check out Danny Garcia’s excellent documentary, Looking for Johnny: The Legend of Johnny Thunders.

In real life, when JT went to New Orleans to stay at St. Peter’s Guest House, he’d been reportedly clean for a while except for methadone, but was also in the later stages of Leukemia. Here, he is fighting to “get clean.” When he was in The Heartbreakers, they sang “Too Much Junkie Business” (which is also named dropped in the story, along with other Heartbreakers’ tunes) in the place of Chuck Berry’s “Too Much Monkey Business,” as drugs are like having a monkey on your back, as the saying goes. Another metaphor for getting clean, of course, is going through hell, so this is where the film is leading us. Right from the start, the hints begin with the hotel proprietor (Jimbo Barnett, whose NoLeans accent comes and goes), in his red vest, saying “I’ll be damned if one of our maids haven’t already cleaned it for ya.” The opening hand has been dealt. And room 37 looks about as peaceful as room 237 at the Overlook Hotel; both also deal with the tub being central, but for this film, it is a symbol for death as the original drummer of the New York Dolls, Billy Murcia, died in one.

Here’s some notes about the film’s version of JT as opposed to seeing him in reality; I never did hang out with him (honestly, I was a chickenshit who was intimidated by him and the drug culture around him in general, so I’d go see the bands, have my one drink and nurse it through the night, and then go home to shower before heading off to Queens College without sleep). On stage, you never knew what you were going to get, the on-fire JT who would tear it up, running one song into the next, or the stoned JT who’s tongue would whip around his lips, or be so out of it that he had trouble fingering his chords (I remember one really bad night at Irving Plaza), but the latter was more rare. One of JT’s traits was to whip around the stage especially during the instrumental parts.

Near the beginning of the film, fictional JT performs while the album version of “Born to Lose” from the Heartbreakers’ L.A.M.F. plays on the soundtrack (why didn’t they use one from Live at Max’s instead, like “Let Go”?). Interestingly, the Dolls are often name-dropped, but not the Heartbreakers. When Leo Ramsey impersonates JT onstage, he kinda stays in one spot; JT was a whirler who would own the stage by covering as much of it as possible, sometimes jerking around it (and the chords on the guitar) like a ball in a pinball game. After a swan dive off stage in the film, JT states, “Happens all the time…” Oh, no it didn’t as far as I remember.

Ramsey plays JT as very low key for a big personality; from what I understand, JT could be a sweetheart with a sharp sense of humor or a conniving trickster, depending on mood or need of drugs. Here, he’s fidgety, more like late 1970s-early ‘80s days than near the end, but he’s actually okay as JT… at least a fictionalized version of him.

The cast does well in general, and the camera seems to love to focus on what seems to be the only maid in the entire hotel, Iris (Devin McGregor Ketko, who reminds me of a young Mary Woronov). She also seems to be there more for JT to talk to, as a device for the audience to gain some exposition. On a side note, it’s nice to see Kelly Erin Decker in a cameo as a hospital receptionist.

Lots of names are thrown around here (David, Sylvain, Jerry, Arthur; “The Kids are Back,” “Chinese Rocks,” etc.) that fans would recognize but the average viewer would be perplexed. As someone who knows the backstory, I could smile, especially when I recognized Sylvain’s real and easily-identifiable voice on the phone (though I wonder if he regrets lending it now; and get well, Sylvain!).

As the film progresses and JT spirals down after his money and methadone are stolen. JT’s hair seems perpetually greasy for some reason; as the story progresses JT gets more and more desperate and ragged looking. This may be the filmmaker’s way of indicating the leukemia, which causes sweating, a wan pallor and easy bruising (among other symptoms). JT continues to look more and more like a zombie/living dead creature, with racoon eyes and onion paper skin, stumbling around as he involuntarily detoxes. By the end, he’s looking more like MJ (Michael Jackson) than JT.

The big extras, of course, are the three discs, with the film available in High Definition Blu-ray, DVD, and the soundtrack CD. Other than that, what is offered is the trailer, a slideshow that is based on screen shots alone (while the acoustic version of “You Can’t Put Your Arms Around a Memory” plays), and a bunch of other cool Cleopatra trailers. As for the soundtrack CD, well, the first six songs are great, but the rest is pretty much filler. Better to pick up the Dolls’ and Heartbreakers’ collections, and JT’s classic So Alone LP.

The film tries hard for symbol-ism, and it’s very stylized with a dingy tone thanks to some lens filters. Some have said this is more “horror,” but more likely possibly supposed to be “drug influence” as LSD was found in JT’s system at time of death (no other lethal level of drugs), thanks to a large dosing by someone. And yes, his money was missing when they found him, though the story adds more mystery to it. The filmmakers imply that much of what is happening in the film is part of his hallucinations from the LSD, but does not indicate (wisely) what is due to cinematic reality or within the character’s (JT’s) head. This works pretty well most of the time, though there is a whole hospital sequence that begins the final act that is a bit ridiculous; that being said, a couple of good jump scares are included.

Overall, it’s not a bad film, but not a great one either. I realize a contingent of JT’s fans are boycotting the film, but while I understand that sentiment, I think it’s better to approach this as fiction rather than biographical in any way, as I stated earlier. That being said, the end of the film gives us some title cards about Johnny’s Leukemia and lack of high drug levels during his autopsy as if to atone for the fiction part of the story.