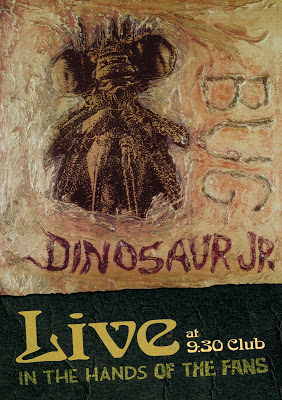 The 9:30 Club in Washington, DC, is a fantastic place for the reunion of Dinosaur Jr., and for them to play out their entire 38-minute classic noise punk 1988 release, Bug. The club was to DC what CBGB and the Rat were to New York and Boston, respectively.

For the second title released as In the Hands of the Fans (the first being the Stooges doing Raw Power), the band started out as Dinosaur, and then had to add Jr. to it because the name was already taken by some L.A. classic rocker “superband” that lasted for five minutes, step on the same stage. This is remarkable for a number of reasons, two of which are the length of time from the last performance to this mini-tour, and that this band has quite the combative history of infighting of the Who proportions.

The problem with them, as trio of humans, is that they are all hyper-talented perfectionists, with their own vision of what that entails. Needless to say, there have been some classic and highly-publicized intraband clashes. Plus, being prima donnas didn’t help, either.

Getting back to the story behind the series, through an online contest (via YouTube), fans were asked to send in videos of why they should be the chosen ones to film the concert. Six were selected, and we are introduced to them (all male) before the start of the performance part. Before the show, each is given a placed to stand and a camera. Then all the film is edited together in a coherent full concert.

As a band, they are infamously loud. For example, even in a club the size of the 9:30, there is a stack of 6 Marshall Amps alone behind vocalist / guitarist J Mascis, and another stack behind bassist Lou Barlow. And yet drummer Murph holds his own against this wall of noise.

The band is often lumped into either the hardcore bands on SST (who released much of their material), or compared to the alternative scene of Nirvana and the rest of the Northwest. This is actually inaccurate. It could be more precise to posit that they are part of the missing link between those two scenes; their sound is quite chaotic, with crashing instrumentals, and Mascis’s less than pretty voice (never mind on key), bred in the hardcore scene, but they also have a sense of melody, structure and a heavy reliance on guitar, as much of the Northwest discipline did, with the likes of Mudhoney, Soundgarden, and yes, Nirvana.

With the strong reliance on classic/heavy rock, through the use of long guitar solos that had been abhorrent to the hardcore scene before it, the new breed of SST artists like DJr stretched in new ways by bringing back some of the old. Their shows, as evidenced here, were not necessarily full of jumping around… okay, Barlow shows he can move onstage, but Mascis is sturdy as a rock, and I do not say this in a disparagingly way. It’s hard to read him, with his long (now nearly white) hair hiding his face to the audience and cameras, his voice is of a thin range so there is not much that can be read into his vocal emoting. But he is the both rock and the hard place when it comes to playing his instrument, which is does with flair, even when he’s wailing.

Bug was a big release for the band, going to No. 1 in the UK in the indie charts. And yet, in his curmudgeonly way, Mascis has stated quite clearly in the past that this was his least favorite album (perhaps because it was most popular, going against punk ethics?). It is one of the more, well, commercial (relatively) of DJr’s albums, with a definite melody line amid the thrash, and recognizable chord progressions, even if the lyrics get lost in the translation. Mascis has been called monotone, and I don’t necessarily buy into that, but I would agree with the mumbles part. And since I listen to the LP every once in a while but not enough to know it well, I am not sure about the overall content / intent.

Despite the ravages of time and discordant behavior within the band, they remain tight as a trio, familiar enough with each other’s moves and licks to be in sync, at least musically. In part because of this, Bug remains a stalwart and influential record, and it’s as stunning live now as it was on vinyl (you heard me) then. Unlike the Stooges show which played the album out of order mixed with other tunes, DJr stick to the LP, and in same order.

For the final song on the album, “Don’t,” which is the only track on Bug that Barlow was permitted to sing, they bring up a guest vocalist from the audience (one of the video winners?) to scream out the oft repeated lyrics, ”Why?! Why don’t you like me?!” This may be Barlow’s protest, by saying, “You want me to sing only one tune, then fuck you, someone else can do it for me.” Or perhaps it’s a way to connect with the audience via participation (or both). With Mascis’s wild post-hardcore guitar screeching solo over Barlow and Murph’s rhythm pounding, this long piece really epitomizes the sound that followed the original basic structure of the start of punk’s Third Wave.

An interesting aspect about watching the band is that even though their sound melds so well, they could all be in separate rooms for all the physical interaction. There isn’t really much in the way of eye contact. Mascis basically looks down at his guitar when he’s not at the mic, Barlow bounces around in that hardcore back and forth motion, and Murph, well, drummers need to concentrate on the tempo. There is a b-roll shot of them talking in the back alley during the credits, probably before the show, but how much of that is staged I couldn’t guess.

The six fans do a mostly great job capturing the band, and the editing is superb at not doing that 2-second cut that MTV pioneered and has annoyingly been used to death. True, most of the cameras seem to be focused on Mascis, and I would have liked to have seen more of Barlow’s work, as he’s more interesting to watch onstage, but I understand the “lead” gets the largest draw of attention, even if unintentional.

There are lots of extras for this release, so let’s get on with it. First one up is called “On Stage Interview with Henry Rollins.” The Black Flag fronter / writer / poet / actor / etc. is a self-professed “XL Dinosaur Jr. fan.” He also mentions the opening-but-unseen-here band, Off!, which features ex-Black Flag vocalist Keith Morris (Rollins calls him the “best Black Flag vocalist bar none”; I would have liked to have seen that performance as well). He brings the band up on stage in front of the 9:30 audience while he conducts in questions. Topics include volume, evolvement of style, early career and records, touring, and general punk rawk.

For the “In the Hands of the Fans’” nearly 19-minute short, those who were chosen to film this show get to hang out backstage with DJr, and ask them questions, such as who is their favorite bands/influences, and who would they like to slam. The questions are kind of mundane, but the answers by the band are interesting if you want to know where they come from, musically speaking.

The rest of the shorts are bonus live footage of the songs “In a Jar” and “The Wagon” (9 min) from the same show (I’m guessing the encore), a co-interview with J and director Dave Markey, who is also known for 1991: The Year Punk Broke in1992 and Desperate Teenage Lovedolls (I have the original Desperate Teenage Runaways VHS) in 1986, and I am looking forward to seeing his latest on the Circle Jerks, My Career as a Jerk (8 min), and “Rollins on the 9:30 Club” history (3 min). Most of the extras were filmed in the alleyway behind the club, at least one during the soundcheck bleeding through.

There is no denying that together or individually, Dinosaur Jr. and Bug are among the most influential bands of its period, which I would group with the Minutemen and Husker Du, of music that took the simplistic hardcore scene and changed it into something else, much as the Beatles changed rock’n’roll with Sgt. Pepper’s. It then became something else, even if the genre title stayed the same.

I am hoping this series continues, and as a suggestion, how about Slade doing Stomp Your Hands and Clap Your Feet? Or Television doing Marquee Moon? Or…

Bonus live footage:
In a Jar
The Wagon


Full VOD:
www.youtube.com/verify_age?next_url=/watch%3Fv%3D9Bvv_j0CThU
Posted by Robert Barry Francos at 12:01 AM