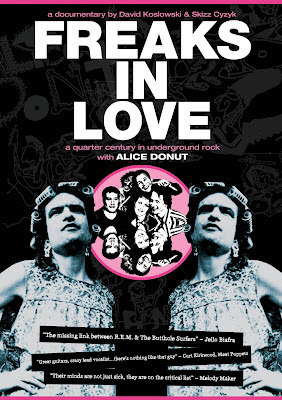 When you think of influential bands from the 1980s, the first name to come to mind may not be Alice Donut. That’s irrelevant, because there is so much music you listen to – especially Generation X and Y – that have a bit of them in there. It’s the same way you need not know Johnny Thunders to have heard those who have.

Originally from New York, Alice Donut (a play on the name Alice Doesn’t Live Here Anymore) is an extension of the artistic side of hardcore, much as was Pulsallama. They were a fine mix of hard bash-and-crash sounds, harmonies, and experimental bizarrities (yeah, I made that word up, whadovit?)

How good were they? Well, I don’t remember what I thought of them when their albums came out (yeah, I got ‘em), but “Egg” has become a new fave, especially for the off-beat, sweet sounding chorus and the mess in-between.

The filmmakers David Koslowski and Skizz Cyzyk do a splendid job following the band around as they ready and perform a reunion show, while presenting us the history of the band in an oral history manner (also with clips), managing to work in just about every living member of the band; while the core stayed the same, there were some who came, went, returned, repeat.

If musicians and accomplices were associated with the band, then they tracked ‘em down. Some who show up include Mindy Weisberger, who shot all the song videos over their 25-year career, and Jello Biafra, who signed them to his Alternative Tentacles label (and, of course, was once lead singer of a little band called the Dead Kennedys…). Even Curt Kirkwood (Meat Puppets) comes around to explain why they were so important. KUSF’s DJ, Germ, appears to illuminate how he became the first to ever play AD on-air. Their long-time producer, Martin Bisi chimes in about working with them. However, the one I wanted to hear from especially was Chet Mazur, the man who the band consistently dressed in frumpy women’s clothes and curlers (he’s on the DVD box), and happily he explains how the whole drag thing came about, even though it seems he’s not sure exactly of the why, either.

One thing that is totally admirable about the band is that even though some members have played musical chairs, they’ve all remained friends over the years, even after annoying each other after long tours; enough that they come back, continue to collaborate, and have nice things to say here, while still being honest enough to admit that not everything was always honky-dory.

.As good as their early material was, as a unit Alice Donut really came together when Viennese classically-trained musician Sissi Shulmeister (translated as schoolmaster?) came to the New World and joined. When the band finally did disburse, she and lead singer Tomas Antona moved to North Carolina and are raising two kids who probably cannot fathom that they probably have the coolest parents in Durham.

Alice Donut songs tend to be about the hardships and absolute absurdities of life, from dealing with loneliness, living an unfulfilled life (such as the song, “The Son of a Disgruntled X-Postal Worker Reflects on His Life While Getting Stones in the Parking Lot of a Winn-Dixie Listening to Metallica”), and general angst and ennui. Their first song, though, was the controversial “Lisa’s Father,” whose subject matter includes alcoholism, child abuse, and false religious beliefs.

Part of the band’s charm, and how they got away with all they did, I believe is in part due to Antona’s high-pitched meandering wail of a voice, which distracts from what he’s actually singing about. This is a good thing, in my mind.

Alice Donut may occasionally show up for a reunion show, but make no mistake about it, their legacy is strong, and held close by their fans. And someday, Antona’s hand-painted raincoats are gonna fetch quite the price.

As if the documentary isn’t enough, there are plenty of extras that last over 40 minutes, most notably a wide variety of live material and interviews from other sources.

Freaks in Love is well crafted from beginning to end. It’s hard not to fall for these people, as they are as entertaining off the stage as they are on.