RANK & FILE: Not a Common Band

The closest I ever came to seeing Rank and File live was on a punk-related Rock Palace television program, sharing the bill with the likes of the Circle Jerks. They did two amazing songs, “Amanda Ruth” and “Hot Wind” (which I still have on VHS somewhere, and I that have attached below). My pal, Steve Adams, who colleged in Austin, used to go see the band during its heyday, and remains a fan.

According to Wikipedia, after the break-up of R&F, Chip and Tony Kinman started the drum-machine-based synthpop band Blackbird, and Alejandro Escovedo joined with his brother Javier to form True Believers, before going solo.

But recently Rank and File have reformed and toured, so who knows what’s next.

PS, I love Gary’s Canadiana take on this, including calling mac’’n’ cheese “Kraft Dinner,” and uncertainty about the Mason-Dixon line: north of it was mostly Slave free, south of it had slavery, starting on the north Virginia state line, and running east to west; it was “dismantled” after the Civil War, though I’m guessing Gary must know that all these years later, especially since he’s living in New Jersey). Note that despite my teasing, Gary is truly among my favorite rock writers, and has been since the days of his own fanzine, The Pig Paper (all issues of which can be found online here: zinewiki.com/Pig_Paper)… – RBF, 2011 . 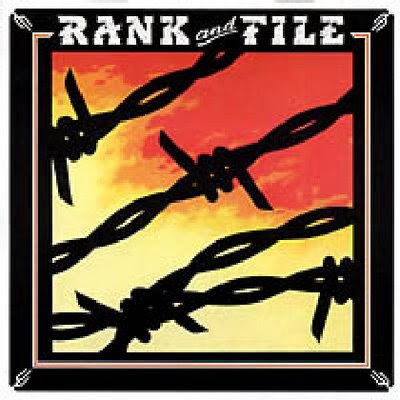 “They sound like a cross between Buck Owens and the Ramones!”
”Watching Chip Kinman on stage is just like watching Gary Busey in The Buddy Holly Story.”
“I have a funny feeling I’m witnessing the birth of something amazing.”
Oh, my God!”

On Saturday, April 2, 1983, Rank and File brought heir unique interpretation of The American Sound to the ratty Radio City club, deep within the bowels of the bed-washbasin-and-surfboard suburb of L.A. known as Anaheim, California (right down the road from Disneyland!). Quoted verbatim above are but four of the many observations I solicited from the preppies, punkies, and poseurs of all persuasions who stood spellbound as Rank and File recreated – in fact, incarnated – their groundbreaking Sundown LP atop the creaky Radio City stage. By the end of their 45-minute set, as the audience’s bewilderment had graduated form half-hearted slam-dancing to sub-Hee Haw-style hoots ‘n’ hollers, I couldn’t help but imagine that this must’ve been just like it would have been to see Elvis, Scotty and Bill playing around the Memphis trucker bars and parking lots 30 years ago! Hell – maybe we are witnessing The Birth of Something Amazing.

”We had to do a lot of growing up in order to get where we are today…” – Chip Kinman: guitar, vocals, harmonica and Buddy Busey imitations.
”…and play what we are today.” – Tony Kinman: vocals and authentic Bonanza headwear.
”…and I’m just the drummer.” – Slim Evans: just drums.
”I agree.” – Alejandro Escovedo: guitar, vocals, and grinning Spanish teen appeal.

To make a sob story short, the Kinman brothers woke up one day near San Francisco during the Summer of Hate to find themselves, as one half of the infamous Dils, bonafide yet reluctant stars of the local blank generation. Much soul-searching ensued, which quickly lead to (as is vividly recounted on Sundown’s strongest cut, “I Went Walking”) the break-up of the Dils, a sabbatical to NYC’s St. Mark’s Place, a damnation of the their NeWave era in general, and ultimately, a pilgrimage to the Deep South to bask in the comparatively calming sounds and smells of the Great American Heartland. To this day, they call Austin, Texas “home.”

Suddenly, Chip and Tony had traded in their trendy Sears Silvertones for authentic Fender gear, unearthed in Slim Evans one of the finest skinmen this side of D.J. Fontana, sent for their old Bay Area sidekick Alejandro to round out the quartet, and faster than you can say Get Rhythm!, this renegade combo were tearing up every truckstop, lounge, and even punk palace south of the Mason-Dixon line. (Which reminds me: where in hell is the Mason-Dixon line anyways?) Like the good ol’ boys they now were, they lived on Lone Star Beer and Kraft Dinner ‘til they had enough saved up to buy a station wagon with which to return west to the Promised Land where, during the fall of ’82, they blew a much-needed breath of fresh prairie air into the spandex’d El Lay music scene.

Soon, our heroes found themselves back in ‘Frisco, laying down tracks for their first Slash Records album – an LP, which no less than Robert Hillburn, the West Coast’s very own Robert Christgau, proclaimed as “one of the strongest American debut records in a decade.” In fact, Mr. Hillburn found himself so totally enamored with Sundown that he had 10 copies send air express! to the Man in Black hisself, Johnny Cash, and then urged his VIP pals at Warner Bros. that they’d better pick up this platter, fast, if they knew what was good for ‘em. As a result, you can now find Rank and File proudly displayed in your local discery, right alongside the new Duran Duran… or George Jones… or Journey…

And herein we arrive at the primary dilemma which could very well prevent Rank and File from claiming their rightful place atop several of Billboard’s Hot Hit charts: just what is Rank and File? Country? Pop? New Wave? Mockabilly? Well, I for one chose (e) All of the Above, coz in Sundown, I can hear at any given moment the twang of a Link Wray, the hooks of a Goffin-King, the lyrical wit of a Nick Lowe, and the harmonies of the brothers Louvin and Everly. Yet the blend is far from nostalgic or regurgitent: the Kinman’s compositions sound somehow Fresh, New, Current, and Vital. Just like that other great American rock phenomenon, Creedence Clearwater Revival sounded a dozen years ago, remember?

But unlike the Hey!days of CCR, U.S. radio today just isn’t as ignorantly open to the fresh, new, current or vital – sure, “Do You Really Want to Hurt Me” went Top Ten, but only by initial packaging it in a blank sleeve, if y’know what I mean. Consequently, I often find myself awakening at 3 a.m. in a cold sweat, fearful that Rank and File’s potential as Divine Saviors of U.S. Music (sorry folks – I’m on my soapbox again) might be irreversibly nixed in the bud. Jesus Christ! These guys could fuckin’ revolutionize what we now blindly accept as C&W they could be the Sex Pistols to the Kenny Rogers and Barbara Mandrells who now effortlessly and offensively rule the majority of this nation’s jukeboxes, airwaves, and music award ballots. Given half a chance, Sundown could shake things up one helluva lot more than an entire army of Dils ever could!

Okay – I worry about such things. Maybe you do too. But does Tony Kinman? “Nah,” he informed me between rounds at the Radio City bar. “Every band me ‘n Chip have been in has, uh, Made It to some extent. But, you know – so what? The success part of things is really outta our hands for the most part. It’s managers and record companies who have to worry about that stuff. And the people out there really decide in the long run how big a band can be, and for how long.”

But Holy Cow, Tony! Doesn’t it bug you guys that if it wasn’t for the Casey Kasems and the Kal Rudmans of the world, Rank and File could very well be that exclusive Next Big Thing we’ve all be waiting breathlessly for?!!, I scream out. Tony’s long, low, all-knowing laugh is my only reply. But it’s his alter-ego, Chip, who leaves me with this final, all-encompassing, concluding profundity before leaping back on stage for the second set:

“Success? All I care about is what key we’re gonna do ‘White Lightening’ in tonight!”

And There You Have It: the saga of a relatively new band busy brewing right under your very noses. Looking for musical kicks in the ‘Eighties? No need to shop overseas amongst the latest mascara’d synthepoppers: Buy American. Support Rank and File. And who know? We may never have to listen to the Gatlin Brothers Ever Again!
Posted by Robert Barry Francos at 12:01 AM