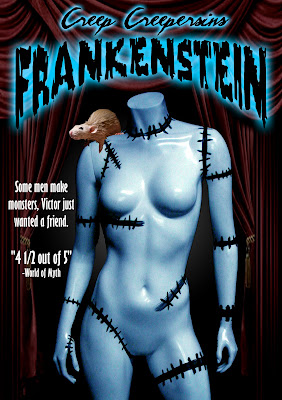 Sometimes films like this piss me off. I mean, $2 budget, single location, three or four actors, and it tells a story in an hour. Why does it make me angry? Because this nickel-and-dime job is better than a lot of what I see coming out of Hollywood these days. No, dummy, I’m not mad at this film, but those filmmakers who spend millions to bore me, when it really doesn’t take that much to put out a good show with some talent behind ya.

The Frankenstein of the title is, in reality, the name of the protagonist’s pet rat. Victor (all the main characters have names that are in some way related to Mary Shelley’s book), portrayed by James Porter, is a lonely man living on an acreage (filmed outside Eugene, OR). After a childhood of verbal violence by his mom and sexual abuse by his dad, Victor is a severely mentally damaged human.

His day consists of waking, brushing his teeth (which we watch from a distance for a good couple of minutes the first time), eating his scrambled eggs (a symbol for his mind, I gather) while reading porn, playing with his white rat companion (whom he often carries around), and sitting on the porch as the grey days pass. He keeps the television on while old horror flicks flash (scenes include Chaney Sr.’s Phantom and Hunchback, Night of the Living Dead, Carnival of Souls, White Zombie, and Nosferatu). As the action continues, bits of these films are edited in as they reflect the action in the story. This is very well done, I might add.

The run-down, less-than-homey house is obviously the residence in which he grew up, with skimpy bamboo curtains and dark shadows. As a nice touch, behind the kitchen table is obviously his childhood dresser, filled with the stickers, and a front of one of the drawers is missing. This one object alone, whether the director meant it or not, is completely symbolic of Victor’s entire life and frame of mind.

His only visitor is a social worker who occasionally peaks in on him named Shelley (get it?), played by cigarette-growl-voiced Nicolle Nemeth, who looks like she is or was a hot biker chick. She bullies and teases him, making fun of his handicap for her own amusement. Generally speaking, she is not a nice person. As an interesting directorial choice, whenever she speaks, the dialog is played backwards so the viewer cannot understand what she is saying. Victor responds, as obviously he does comprehend, and his speaking is played normally. Even though Shelley’s soundtrack is in reverse, the tone is clear in what she means. This touch is just one of the many pleasant surprises and twists that make this film more than the usual indie drop.

Ever so quickly, his mind starts going further and further around the bend from reality. Victor begins hearing voices (by the Creeper, himself) and seeing his mother who sits with her back to him (Nikki Wall, Creepersin’s real-life wife and film partner), tormenting him and calling him gay slurs because of his paternal molestation.

Distressed about his solitude, he has an idea by glancing around the room and seeing a copy of The Annotated Frankenstein and Grey’s Anatomy books, and a nudie mag: Victor decides to create his own human companion. So when a young couple trespasses on his property, he hammers the woman (literally) and brings her back to his cabin. Carefully, using a marker, he draws lines on her body that make up the classic scar and stitch marks on the filmed Frankenstein’s monster. As he does this, he paraphrases Colin Clive’s classic line, “She only sleeping, waiting for a new life to come.”

There is an argument in Victor’s mind between him and the rat (yes, they “talk”) whether to name ”his creation” Elizabeth or Mary (the rat wins, and the latter is chosen; of course in the book and film, the creature had no given name), bitchily played by Kelly Kingsbury. He imagines her getting up and joining him for breakfast, with her first words (in his mind) being, “This coffee tastes like shit,” which is the kindest thing she has to say in the next few scenes. Again, this is where the joyously unpredictable comes in and style takes over. When Mary is talking, she is in a red filtered lens and is presented as a silent film, complete with title cards. Victor (who is often bathed in blue light) even has a conversation with her in the same shot, with Mary in an enclosure within the frame (shown briefly in the trailer, below).

While I won’t say more about the plot, I would like to add that I am duly impressed by the imaginative way this film is presented. Yes, there is a bit of scenery chewing, but Porter manages to make his character both demented, yet highly pathetic. I’m not sure how much Kingsbury was actually acting, as she obviously was not having a good time and didn’t even show up for the second day of the two-day shoot (as explained in the 30 minute or so Making Of documentary bonus feature). I would have liked to have seen more of Nemeth’s character, perhaps an explanation for her cruelty at worst, uncaring at best.

While A.L. Smith, Cordell Stetson, and Creepersin certainly did a great job with the editing, it is worthy to note that there are also some lengthy shots (I am guessing they had one real camera, other than the one used for the Making Of, which likely was a mini-cam). I have been seeing a lot of recent indie films in the horror genre, and this is definitely one of the better ones around. There’s not really any gore (though some blood), no nudity (other than pans of a magazine), nor much of a boo! factor, but there is definite tension and suspense going on, and this is definitely story driven.

The Making Of documentary is called “A Test of Our Own Stupidity,” mostly taped by Stetson on the second day of shooting. My suggestion is to just fast-scan through the first 10 minutes, which lives up to the title, as the crew stands around, smoking, jabbering, and not really saying anything noteworthy (other than the off-hand comment about Kingsbury’s unhappiness about the first day, but no details). Once Creepersin starts talking about his filmmaking process, and we see them setting up shots and filming, it gets more interesting, if inconsistently.

There are three trailers for this film added in the special features section, which is good, but I would have liked to have seen some from Creepersin’s other flicks, such as OC Babes and the Slashers of Zombietown, Creep Creepersin’s Creepshow, The Corporate Cut-Throat Massacre or (and I kid you not) Vaginal Holocaust.