All performance photos in this blog by Robert Barry Francos/FFanzeen

A while back, I was at the diminutive yet intimate Rockwood Music Hall on Allen Street (on the “Side of the Lower East”) to hear a singer I’m fond of (but is not the focus here). My pal Gittar and I decided to stay and see what the next singer would be like, and then head out; a couple of songs, we figured. When Tamara Hey came on, we silently stayed the whole set. Obtaining her CD, it became one of my favorites over the past year or so.

Sunday, November 18, 2007, found me back at the Rockwood, waiting for Tamara to play again, where she plays semi-regularly. She was third on the bill, so with camera in hand, I ordered my drink (which, as usual, I nursed through the night), and waited. 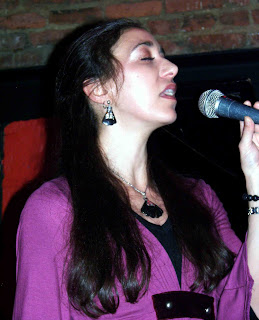 First up was JOCELYN MEDINA, who was backed by piano, stand-up bass, and drum. The stage at Rockwood is so small that the majority of it is taken up by the grand piano, so the drum is set up off the stage, against the wall between the stage and door. Jocelyn is solid jazz, with some Brazilian influence thrown in. Some songs she wrote herself, and others she wrote the lyrics which are put to other instrumentals by jazz greats. The band was obviously new to the material, and Jocelyn helped them along with directions between songs, and they quite competently kept up. Jocelyn herself took a couple of songs to get into the groove, but once she did, her voice layered over the backing group in a fine soup of sounds. When she sang a couple of numbers in Portuguese that she seemed especially to let herself go with the music. I was glad for the opportunity to see her. 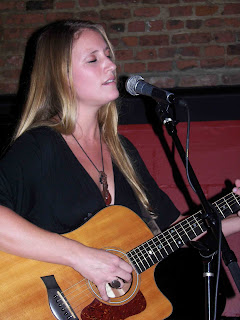 Next up was LEAHA BOSCHEN, in this occasion a solo artist playing either guitar or piano. Originating from the West Coast, she still filled the place with fans, many of whom she apparently knew personally. This made for a very personal, and informal performance that was relaxed and totally enjoyable. She dedicated songs to people who were sitting there, making it feel as much a living room as a performance space. Leaha has a strong voice that carries it through her songs. It cradles, it beckons, and it storms the castle with sheer force, as she touches on relationships and the human condition. What’s more, she looked like she was having such fun with all this. When she found out she could be on for nearly an hour, she was quite happy. The audience didn’t want to let her go when she was done. 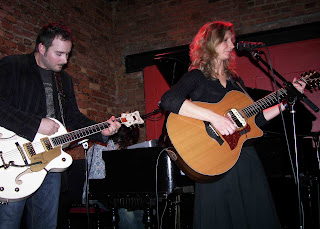 TAMARA HEY was third up. Again the place filled with her fans. She plays acoustic guitar, and she was backed by electric guitar and piano. Tamara is another performer who looks like she is having a blast up there. One of the aspects I admire about her is that her topics are not typical. For example this night, songs included missing someone (“Right This Minute”, one of my favorites of her work), realizing a relationship is ending during a boring flight (“Up in the Air”), or working a really crappy temp job (“Part Time Help Me”, which she announced was a true story). There were many other songs off her CD I was hoping she would do, like the incredibly sad “More Like Melanie” or the toe-tapping “Pebble in My Shoe”, but I certainly would not say I was disappointed by the selection. I enjoyed hearing material that’s new to me. Tamara’s voice is on a higher register, but has a bite to it. Her music has just the slight hint of Nashville, but not so much one would want to shout “yee-haw”, if you get my drift. I recommend getting her CD and seeing her perform. She plays around often, and I may even see you there.

There were more bands to play, as is the custom at the Rockwood, but I knew it was time for me to go. And have a sandwich at Katz's.

Here is a link to more photos from the show: http://community.webshots.com/user/ffranzos2006v1
Posted by Robert Barry Francos at 9:13 PM