I really needed to get away this past weekend (9/15-16/07), and figured to take a quick run up to Boston, using the opportunity to visit a 30-year pal, Joe Viglione (aka The Count). It was certainly event-filled. 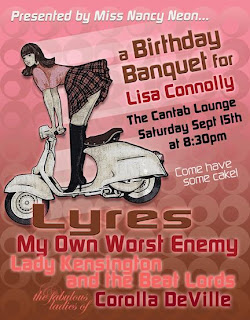 After a decent supper at a buffet restaurant filled with families zoned out on carbs, we headed off to Club Bohemia at the Cantab Lounge, in Cambridge. Mickey Bliss runs the shows at the Lounge, and this particular evening was hosted by another one of my oldest friends, Nancy Neon (affectionately known as NanSuzy to me). We used to hang out almost nightly at Max’s Kansas City and CBGB’s in the day.

At the Cantab, Nancy introduced me to a few people, including Joey Boy, of the band Red Invasion. He was DJ-ing that night, pulling up some new sounds and some old classics, like Televisions “See No Evil” and the Pistol’s “No Feeling”. I look forward to checking out his band. 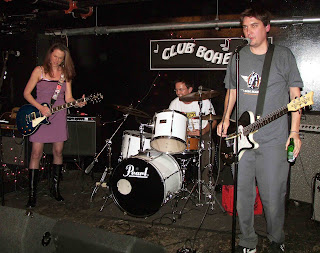 I was too late to see the opening act, Corolla Deville, but got there just in time for another band I didn’t know, MY OWN WORST ENEMY(MOWE). Sharing the lead are partners Sue and Steve on guitars, and AJ on drums (yep, no bass). The camaraderie between Sue and Steve is obvious, and they play off each other well. The songs are spirited, and well written with sharp melody lines and biting lyrics. Sue stomps her foot for emphasis every once in a while, and it sure does look like they’re having fun up there. Definitely an indie sound (yeah, I know that’s a cliché term, but they possess what made it important in the first place), going along with other quirky college radio friendly intones like the Pixies, the Neighborhoods, and Salem 66 (though not as quirky). Less morose than most indie bands of the style, they tend towards uptempos and less dissonance. They did a great cover of Patti Smith’s “Redendo Beach”, to which I danced with Nancy…nothing like dancing to a song about suicide. I’m glad I got to see them, and hope I get to see MOWE on a New York stage. 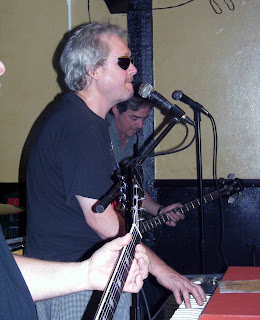 Next up was the classic Boston band, LYRES, fronted by Jeff “Monoman” Conolly on vox and Vox, and tambourine, while being backed by the standard guitar/bass/drum set-up. I’ve seen Lyres a few times now in New York, including during the garage revival hey-day of the ‘80s and at a Cave-Stomp around the Fin-de-Siecle. I also may have seen them once at the Rat, but I’m not sure. But this show was pure classic Lyres, so I'm glad I had the opportunity to see them play this night.

It’s amusing to me that Jeff has his set list on a two-sided sheet of paper with a list of the songs he plays, and then he picks and chooses (see on my photo page, the link below). And his picks were, of course, great as always. These garage-tinged songs included a cover of the Stoic’s “Enough of What I Need” (though for me it’s more a cover of the Mystic Eyes, which I find to be the definitive version). 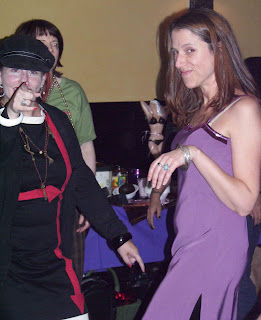 [ffoto: Nancy and Sue] During this tune, while I was taking pictures, Nancy and I caught eyes as we both sang along. It was a cool moment. To me, Lyres are more than just a collection of old vinyl (or CDs), they epitomize a sound and a certain style and sound, as do the Chesterfield Kings with a bluesy garage and the A-Bones with rockabilly garage (in fact, I kept looking around, almost expecting to see Billy and Miriam).

Joe and I left after Lyres, which turned out to be fine as the last band, Lady Kensington & the Beatlords, were a no-show.

Soon as I got back to Joe’s place, my head hit the couch and I was out. 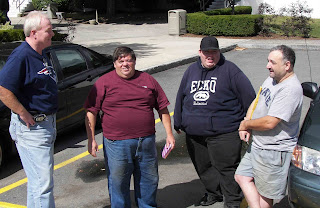 [In ffoto left to right: Larry, Doug, Ernie, Joe] The next day, Sunday, Joe drove us up to Salem, where we made an appearance at a local Boston music-related radio show on WMWM-FM, at Salem State College. We got there toward the end of the show, and the DJ, Ernie Lang, included me into the show, along with his pals Doug Mascott and Larry Oak (who gave me his CD, “Tuesday’s At Al’s”), along with Joe, of course. They started off by challenging me, asking who I thought was going to win the game that night, the Red Sox or the Yankees. I pleaded by fifth by saying something that was approved, but actually makes no sense: “I go with the team that has the best opening band.” We all shot the breeze, discussing Boston bands from the ‘70s and ‘80s, a topic inspired in part by local “scene-ster” Brent Milano’s recent book “The Sound of Our Town: A History of Boston Rock and Roll”, which some like for its content and others don’t for its omissions. I haven’t read it. As I have a lot of Beantown bands I like, from Willie Alexander to Dogmatics to Boys Life to City Thrills, to name just a few (all of which I’ve seen), it was easy to keep up with the topic.

Oh, and the Yankees won that night. 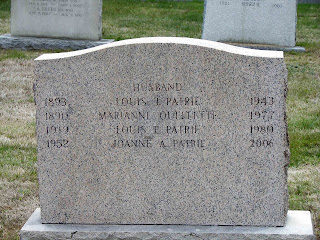 Before heading back to Boston, Joe drove us to St. Mary’s Cemetery to pay our respects to the late, great, JOJO LAINE (nee Joanne Patrie). She was the ex-wife of Brit phenom Denny Laine, a lover of Rolling Stones’ (etc.) producer Jimmy Miller (among others), a legend all her own in New England, and a good friend of Joe’s.

Back in Boston, Joe taught me how to add pictures to this blog, and I’m certainly grateful to him for that. And soon after that, I was on my way back to New York, with fresh CDs in my bag, photos in my camera, and stories to tell.

All the rest of the photos: http://community.webshots.com/user/ffranzos2006v1
Posted by Robert Barry Francos at 1:21 PM