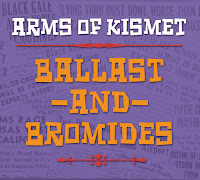 Arms of Kismet
Ballast and Bromides
Wampus Multimedia
wampus.com
This group is definitely a child of the modern era. Members of the band recorded their parts where they lived, in Virginia, Maryland and Kent, UK, and it was all put together in a studio in VA. They all circle around singer-songwriter Mark Doyon who literally takes the listener on a journey. The overriding theme of the song collection is traveling and transportation, from “Cali, USA” (“Specious Claims”) to “Zanzibar,” to Canada in “True North.” Within the songs is a sense of longing and confusion about what is going on in the world today, and the off-centeredness of our lives. News flashes, and views from below the Mason-Dixon, as Doyon sees and questions the state of the State of the Union, as well as the world. The songs are filled with electronic sounds without being too much electronica-based, giving us a pop-rock with intelligent lyrics, such as “Now I awaken in the house of the Lord / And I’m standing at the altar / And as I get my marching orders / Don’t let me falter” (from “Found”) and “Stumble to the subway / Newspaper in hand / I’m scanning the headlines / But there’s nothing all that grand / Just someone’s losses / And someone’s gains…” (from “Be There”). Doyon has a fine tenor, John Lennon-ish voice (especially on “Soul in a Sling”), that mixes art with pop, and gets his message across seamlessly, without needing to rely on dissonance and noise, despite the electronics. 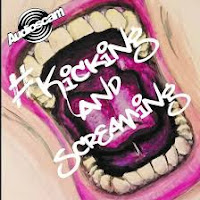 Audioscam
#Kicking and Screaming
audioscam.com.au
Truly, I do not understand why this band is not played on the radio more, which spins the likes of Rupert Holmes and Stephen Bishop nearly constantly. Audioscam’s music is catchy, non-threatening, and fine at a party of MOR-minded company. The Australian band has been around for a bit over 10 years now, at least, and they have nailed their sound. The harmonies with drummer Brian Pitcher’s high-end vocals, and Wayne Macintosh’s guitar up front is some fun near pop (not Top 10 pop, but perhaps from around 1975). As I implied earlier, this band is definitely radio-friendly, and they should be played on Adult Contemporary MOR stations more. This is closer to an EP than an LP, but that’s what many of Audioscam’s releases tend to be, and I’m cool with that. 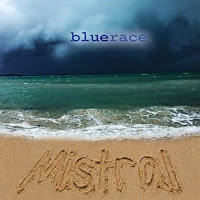 bluerace
Mistral
facebook.com/blueraceband
What, you’re saying you miss the Fillmore sound, East or West? Well, this East Coast band has just what you’re looking for, but more. Not that drudgey, druggy, overly oppressive sound like Blue Cheer as rock’n’roll turned to rock, but a more pre-progressive sound with just a bit of pop left in and without the pretentions of the likes of ELP. Guitar fronted with Roger Diller taking lead and vocalist Thom Gencarelli backing him up on rhythm, they switch on an off on wah bars, but mostly it’s straightforward, and for that I’m grateful. Vic Marcado is the main rhythm section on drums, with various bassists filling in. The song lyrics are smart (no surprise to me at all), and not just about sex and love (though there are the likes of the ballad “Stop My Heart” where Thom shows off some keyboard chops) or whining songs, they are life and the world around us. Even a little a bit of philosophy, such as the catchy opener “Either/Or.” There is little to chant along with, as this is a bit more “adult” than that, but you might find more than one of the melodies and choruses getting stuck in your head as Thom lays it out. That’s not to say there isn’t some really well done harmonies, such as with “Secrets of the World” and “More Than I Love.” This fits somewhere after Sgt. Pepper’s and before Woodstock. It’s a nice, clean sound. Lyric sheet included. 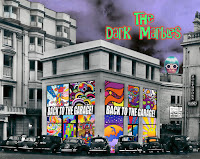 The Dark Marbles
Back to the Garage!
darkmarbles.com
Yod Crewsy is a Buffalo, NY musical legend, with his feet firmly in the garage past of bands like the Splatcats. His recent group is the Dark Marbles, who have been around for a while now. His latest release is 21 songs covering 1 hr and 17 minutes, with balls-to-walls covers of great garage sounds, from old to (relatively) recent. Most of them are his interpretations of the songs, making them his own. There’s some poppish fun like Tommy Roe’s “Dizzy,” which is slower and with more wah-wah and echo, for example. Another is a dark, bass-ey and smoking vocal on the Monkees’ “(I’m Not Your) Rollin’ Stone,” which is rich in minor chords and vocal overdubs. Of course, there are some garage classics, all with an original zing, such as the Electric Prunes’ “Too Much Too Dream Last Night,” the Standells’ “Sometimes Good Guys Don’t Wear White,” and one of my all-time faves, the Bad Seeds’ “Taste of the Same.” There are also some nice and odd choices, such as the Only Ones’ “Another Girl, Another Planet,” the Plimsouls’ “Oldest Story in the World,” the Velvet Underground’s “Femme Fatale,” Billy Burnette’s dark-made-darker “Are You With Me Baby?” in which Yod takes out the rockabilly motif, and a slippery version of the Flamin’ Groovies’ “Shake Some Action” that falls in the middle of the original band’s two version. All the cuts are interesting visions of Yod’s readings that are worth a listen. 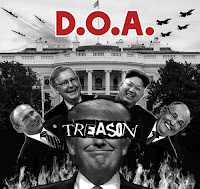 D.O.A.
Treason
Sudden Death Records
suddendeath.ca
D.O.A. have been going strong since hardcore began and are arguably the Canadian band in this genre. I’ve seen them twice in the last 10 years, and they blew me away both times. If you’re looking for the definition of Canadian punk, you really don’t need to go much further (though exploring is good). D.O.A. leans heavily on the side of the political, and the nastier the government, especially in the US, the sharper the band gets lyrically and musically. “Fuck Ronnie” has become “Fucked Up Trump,” for example. D.O.A. has found that sweet spot that so many bands try for and fail, falling on either side of the equation: singer Joey “Shithead” Keithley is the driving vocal force, but there is just enough harmonious chanting to involve the listener if they so choose. Many bands lose power by being too sing-along, like Green Day, and others just slam at you. D.O.A. keeps it balanced, with such examples as “Wait for Tomorrow” and “Just Got Back From the USA.” They sound so much bigger than their power trio affords, but having seen them, it’s not just studio magic, they really are that strong. My only quibble is because the songs are meaningful, I would have liked a lyric sheet, even though they’re clearer than most hardcore bands I’ve heard. The songs are usually under three minutes, and sharper than a razor, even their one cover of Neil Young’s “Hey Hey, My My,” which they’ve added a whole lotta umph and made their own. Not a clinker here. 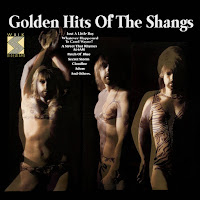 The Shangs
Golden Hits of the Shangs
Judigee! Records
theshangs.ca
Back in the early ‘70s, before even Teenage Head, the Hamilton/Toronto scene were visited by a band called Simply Saucer, who took what would now be called art/psych/proto-punk and gave it an early voice. From the band came multi-instrumentalist/multi-dimensional David Byers to form the Shangs’ with other musical innovator Ed O’Neill in 1989. Well, in 2019, they recorded this long player of their songs. The vocals, overall, have kind of a soft, almost childlike Jan and Dean harmony through a strong reverb or muted filter, with soft, almost ambient music behind them through the use of both standard instruments and electronica. The music, itself, I would almost equate to the sounds of being in a forest and listening to the raindrops rebounding off the petals, only it’s electronic. It’s actually quite lovely, if you are looking for something to wind down with or have on in the background, like those totally cool ambient records you could buy in the 1960s that usually had a woman in a bikini on the cover against a plain, one-color background. Many of the songs are dedicated to obscurity, such as the tap dancing child in the 1975 film The Day of the Locust, the late and underrated actor Carol Wayne, the sad ending of Elizabeth Hartman in the 1965 film A Patch of Blue (the song “Patch of Blue” here is one of my faves on the disc), misunderstood singer Claudine Longet (I have about a half dozen of her LPs, just sayin’), and tragic silent actor Peggy Entwistle. This is solid art rock, set at the pace of Orchestral Manoeuvres in the Dark’s “Somnambulist,” though a bit more dissonant and surprisingly upbeat, in an ambient way. The songs tend to be over 4 minutes long, and can take you away to another outlook. You may not be moshing to this, but you may find yourself getting an aural massage. 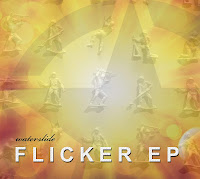 Waterslide
Flicker EP
Wampus Multimedia
wampus.com
I’m not sure if this is Mark Doyon’s post Arms of Kismet group, or a side project, but he definitely picks up where he left off, but with some interesting touches, especially with using Adam “Ditch” Kurtz’s steel guitar to punch up “Grand Mal.” The vocals are reverbed with some nice overdubbed mostly self-harmonies, such as on the excellent “Brownout,” a strong cut, which (like “Grand Mal”) discusses working under stressful situations, in this case as an EMT. “Soar in Place” is a decent song, but uses a bit more electronica than I care for, but that’s just me. My fave cut is the finale, “When They Make the Movie,” a romantic ballad that looks at an imagined film made on the singer’s relationship. Overall, it’s a very pleasant listen.